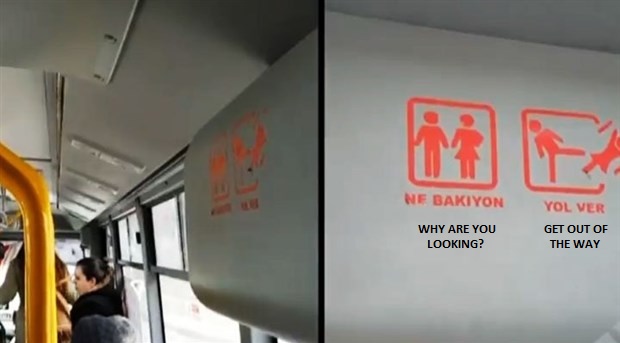 While reports on violence against women, especially in areas open to public, have increased significantly in the last decade, a disturbing sticker encouraging aggression against women was placed inside a municipal bus in Turkey’s capital city of Ankara.

Placed over the bus door, the sticker had figures of a man and a woman standing next to each other with the writing below them saying ‘why are you looking’ followed by another sign that had the man kicking the woman out, says ‘get out of the way.’

According to CNN Türk, the stickers were removed after the passengers reported it. The driver claimed in a video recorded by a journalist that he had not seen the stickers before despite the fact that he had been driving the bus in question for a while. The driver’s aide, on the other hand, said that he had indeed seen it but did not think of it as an offense or as encouraging violence.

Several cases of violence by both male passengers and bus drivers toward woman in public transportation have been witnessed in Turkey lately. Unfortunately, perpetrators of such crimes have mostly been quickly released after questioning after they get caught.