As you may have noticed, the “Year of the Woman” catchphrase — originally used in 1992, when voters elected more women to Congress than ever before in the wake of Anita Hill’s allegations against Supreme Court nominee Clarence Thomas — is back with a vengeance. 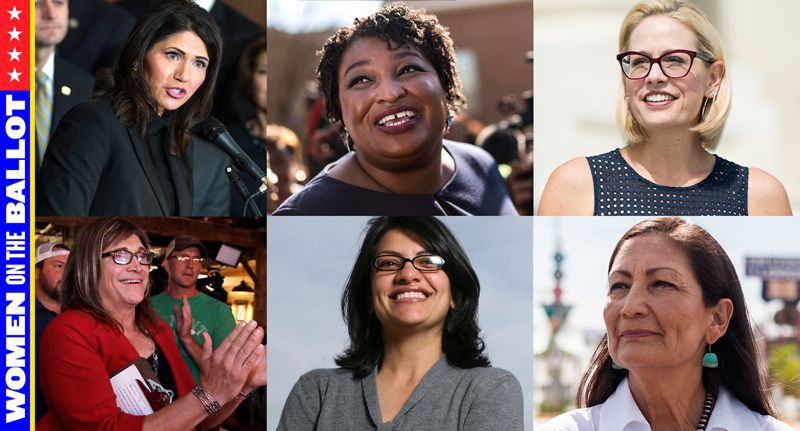 It began with a slow burn after the 2016 elections, heated up with the Hill-like bravery of Christine Blasey Ford at the Brett Kavanaugh hearings, and has lately exploded in use to reference the record number of women running for office in the upcoming Nov. 6 midterm elections.

And whatever you think of the phrase itself, 2018, according to the Center for American Women and Politics (CAWP), is record-breaking regarding women candidates running for offices across the board — U.S. Senate, U.S. House, state legislatures, and statewide offices, including governor races in 16 states, from Alabama to Wyoming.

“Women have secured a record number of nominations for executive and legislative offices at the state level,” said CAWP director Debbie Walsh in a press release. “As states across the country gear up for redistricting in 2020, the winners of these races will play an important role in the shaping of our nation’s politics for the next decade.”

Of the 16 states with women gubernatorial nominees in 2018 (up from the last record of 10, first set in 1994), four have never had a woman governor: Idaho, Georgia, Maine, and South Dakota. In Iowa, where incumbent Kim Reynolds, a Republican, is on the ballot after being appointed last year, no woman has ever been elected governor. Women of colour, who currently hold just eight (2.6%) of statewide elected executive offices, are 10% of all nominees and 30% of women nominees for statewide elected executive office (including governor) this year.

Also a record breaker: the number of general election major-party match-ups in congressional races that will be contested between women. “With more women running than ever before, it is not surprising that we would see more races in which both parties nominate a woman,” Walsh said. “We look forward to the day when races such as these are as commonplace as all-male political contests.”

What inspired you to run for this office?

“I was raised to not stay on the sidelines when someone is being hurt. The corporate assault on my neighbours and Americans across the nation is creating harm to the air we breathe, impacting our quality of life at home and work. We all deserve a right to live in a just and equitable society.” — Rashida Tlaib

“I believe we have so much untapped potential in this country, but Washington isn’t the one to unleash it. … To really turn this country around, we’re going to need a few strong governors who care enough to do big things — to lift people up, strengthen families, and give young people a new hope in the American Dream.” — Kristi Noem

If elected, you would be a first. What sort of responsibility does that carry? How do you feel about it being a part of the conversation?

“I’m running for governor because I care about the issues — I want to expand connectivity in rural Vermont, combat climate, and make health care accessible to all, to name just a few — and that should not be overshadowed by my gender. That said, I don’t want people to ignore my identity either. There is an undeniable significance to what we’ve already achieved with our historic primary win, and to become the first transgender governor would be an important milestone for transgender people. The community benefits from visibility and positive representation, and to provide that would be an honour. It tells trans youth that the sky’s the limit for them.” — Christine Hallquist

“I am not alone. Other women of colour are coming with me. Ilhan Omar, [contender for U.S. House Rep. of Connecticut’s Fifth District] Jahana Hayes, Deb Haaland, Ayanna Pressley [poised to be the first African-American woman elected to Congress in Massachusetts], and Alexandria Ocasio-Cortez [of New York, who would be the youngest woman in Congress ever] all made history. Together, we will help uplift Americans who have felt left out and unheard for far too long.” — Rashida Tlaib

“I grew up on a farm in rural South Dakota. We never had boy chores or girl chores. We just had a list of things to do — and believe me, they had to get done. Whether managing our ranch or writing public policy, that’s how I’ve always approached my job. Sure, I didn’t always finish the chores the same way my brothers did, but I did them my way, and I was judged by the end result. If I am fortunate enough to serve as South Dakota’s first female governor, I’ll expect the same.” — Kristi Noem

“Congress has never heard a voice like mine because, in over 240 years, there has never been a Native American woman elected to serve in that role. I’m a single mother from Albuquerque. I know what it is like to rely on food stamps and WIC, to sit in the waiting room for three hours holding a sick child, and to have to decide between buying groceries and paying the rent. My hope is that I honour the sacrifices my parents and ancestors made to make sure I could even be here today. Maybe the next generations won’t be faced with so many firsts as we increase indigenous representation in Congress.” — Deb Haaland