By Bethan McKernan for The Independent. 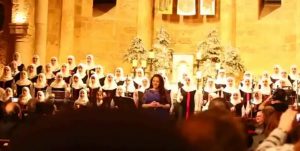 The December concert is one of several the girls performed in in the run-up to Christmas Beirut Chants, via Facebook

Footage of a Muslim girls’ choir singing Christmas carols at a church concert has emerged from from the Lebanese capital of Beirut.

The ensemble of around 40 girls can be seen in a video singing ‘Silent Night’ in Arabic at St Elie Greek Catholic Church, located in a majority Muslim neighborhood of the city.

The Imam Sadr Foundation choir was taking part in a concert organised by the Beirut Chants Festival, which organised 23 free concerts for advent from December 1st.

The girls’ performance took place on the 19th December, where they also accompanied famous Lebanese musician Abeer Nehme. The concert was one of several Christmas events they have taken part in, according to the Imam Sadr Foundation’s Facebook page. 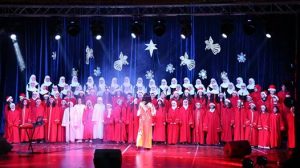 The video has been widely shared on social media, with many comments praising the beauty of the music and the touching interfaith gesture. “Thank you for sharing this beautiful moment,” one person wrote. “Lebanon at its best,” another comment read.

Lebanon is a tolerant and religiously diverse country, whose population is 40 per cent Christian.

Its 1926 constitution ensures that there is parity between Muslim and Christian representatives in government, and the highest offices - President, Speaker of Parliament and Prime Minister - must be occupied by Christian, Shia Muslim and Sunni Muslim candidates respectively.