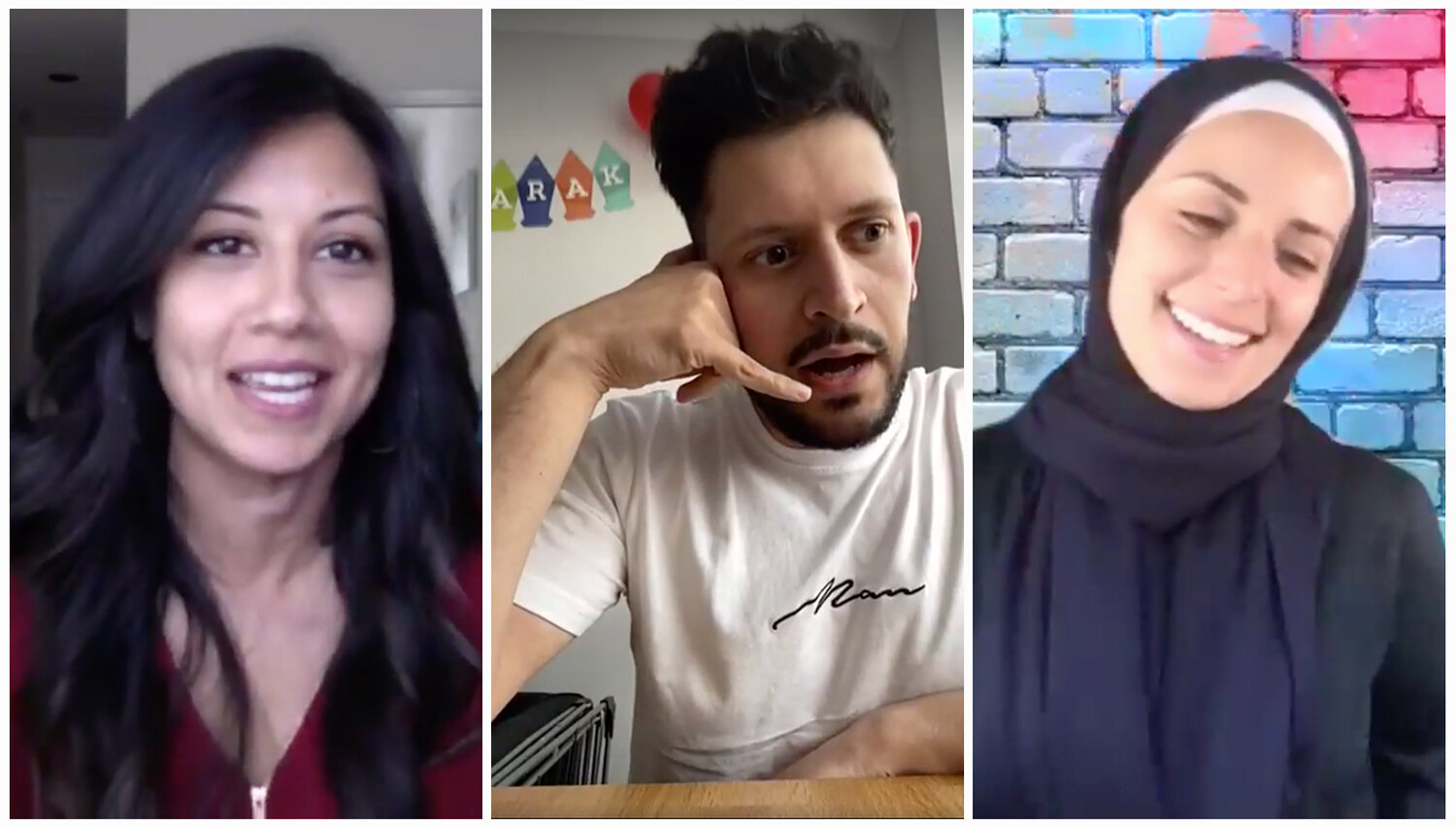 From left: Comedians Natasha Chandel, Abdullah Afzal and Mariam Sobh. They each performed a set during the Socially Distant Eid Comedy Night Special, a virtual event hosted by the Concordia Forum.

Performing on a Facebook livestream, Salma Hindy began her stand-up routine by giving a shout-out to everyone in the audience who was following the guidelines to keep the coronavirus at bay, such as washing hands regularly, covering one's face and keeping a respectful distance from others. Though, as a Muslim, she found these habits a tad familiar.

"You call it coronavirus, I call it sharia law!" said Hindy, referring to the set of principles Muslims abide by.

The Canadian Muslim comedian was one of 40 performers taking part in The Socially Distant Eid Comedy Night, an event hosted by the Concordia Forum, a networking organization for Muslim influencers and changemakers. The goal was to give Muslims around the world some comic relief as they do the unprecedented: celebrate Ramadan and Eid in isolation at home, with fewer family members and friends than usual because of the coronavirus pandemic.

A holy month typically observed by attending daily prayers at the mosque and dinner parties to break the dawn-to-dusk fast, Ramadan was indeed a different sight to behold this year, as was Eid al-Fitr, the holiday that marks the end of Ramadan.

The stand-up comedians come from different occupations and backgrounds, including award-winning performers based in South Africa and the U.K. Their show was livestreamed on May 24, Eid day for many countries. The event is available to watch on the Concordia Forum's Facebook page until Wednesday at 5 p.m. ET.

Muddassar Ahmed, organizer of the event and chair of the Concordia Forum, put together the comedy special during the week leading up to the holiday.

"For the hour or two that people tune in I hope it lifts people's spirits and helps them take their mind off things," says Ahmed.

Each comedian did a 3-minute set, poking fun at themselves and making jokes about Muslim stereotypes.

Hindy's act revolved around dealing with the coronavirus as a Muslim daughter of immigrants. She mentioned the new degree a lot of parents seem to have gained during the pandemic — a PhD from WhatsApp University.

"In WhatsApp University, absolutely no fact-checking is allowed," said Hindy, referring to the habit of some Muslim parents to forward myths and unproven coronavirus cures on WhatsApp, a social messaging app especially popular among immigrants as well as in many countries around the world.

Yaaseen Barnes, a South African stand-up comedian and one of several hosts for the evening, found some pros in celebrating Eid under quarantine. He joked that he no longer had to deal with the issue of praying next to someone who occasionally releases smelly burps of the food they just ate at iftar, the meal to break the daily fast.

"This is why [Zoom] is great, because you don't need to be in the burp," said Barnes, who is known as the "king of one-liners" by the stand-up community in South Africa.

Barnes was delighted to take part in the event and described it as a combination of what he loves: making others laugh and helping people. He hoped he could create a sense of community for those celebrating without family.

"Maybe we can give you something to laugh about and make everyone feel a little bit at home," said Barnes.