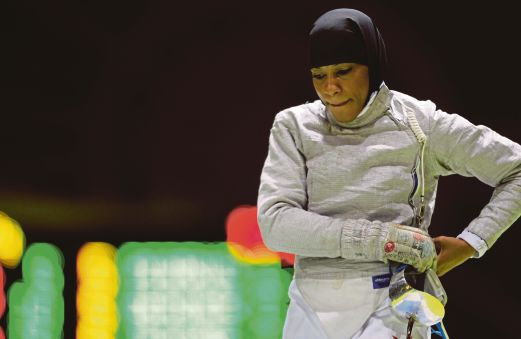 By AFP  for New Strait Times
Fencer Ibtihaj Muhammad is aiming to drive her sabre through bigotry when she becomes the first American athlete to compete at the Olympics wearing a hijab. The articulate 30-year-old African-American Muslim was catapulted to prominence in January after clinching her place on the US Olympic team at the World Cup in Greece. Muhammad’s participation in Rio comes in the midst of a US presidential election campaign marked by anti-Islamic rhetoric while incidents of threats and vandalism at mosques reached an all-time high last year. The ugly atmosphere is all-too familiar for Muhammad, who has faced discrimination since childhood, when her skin color and hijab would often draw stares or abuse. Indeed, part of the attraction of fencing was the fact that Muhammad could blend in more or less seamlessly. “I played different sports growing up and my mum and I just happened to be driving past a high school and saw fencing from the car window,” she recalled. “She saw that the athletes had on long tops and long pants and she didn’t know what the sport was but she wanted me to try it because she thought it would be accommodating for my religious beliefs.” Muhammad was unconvinced at first but persisted when she realized the sport could be a passport to a college education. “I saw that the top 10 schools in the country all had fencing programs so I saw fencing as a way for me to get to school so that’s why I stuck at it initially,” said Muhammad, who graduated from prestigious Duke University in 2007 with a degree in International Relations and African Studies. Muhammad hopes that her Olympic journey may play a small role in shifting the kinds of attitudes that have surfaced during the US election campaign. “It’s a tough political environment that we’re in right now, it’s not easy,” Muhammad said. “Muslims are under the microscope and I’m hoping to change the image that people may have of Muslim women. “I know that Muslim women are very, very diverse, especially here in the United States. We come in all different shapes, colors and sizes and we come from different backgrounds and are productive members of society. I want people to see that.” Republican presidential nominee Donald Trump has been accused of fueling anti-Islamic sentiment, pointedly calling for Muslims to be prevented from entering the United States in December last year. Muhammad diplomatically declined to speculate on what life for American Muslims might be like if Trump is elected to the White House in November. “I hate to talk about what ifs,” she said. “I’m hoping we can change direction a little bit and see Muslims in more of a positive light and try to combat the negative imagery that we are shown every day. Can I influence the debate? I don’t know. I’m just trying to do well in Rio.” The toxic climate has brought practical concerns. After several stories involving Muslims being barred from boarding planes, Muhammad revealed she had harbored fears of suffering a similar fate during qualifiers for Rio. “When Muslims were being kicked off flights in the middle of Olympic qualifiers that was a real worry – am I going to be allowed to board my flight to make it to my Olympic qualifier?” The fact that she is expected to speak about weighty issues relating to her race, religion and gender – rather than merely her sport – does sometimes take its toll, Muhammad acknowledged. “It’s something I struggle with every day. But ultimately I feel incredibly blessed to have been given this platform. And when I think of my predecessors and people who have spoken out against bigotry and hate, I feel like I owe it not just to myself but to my community to try to fight it,” she said. “You have to not just think about yourself, but everyone. And there are people in America right now who don’t feel safe going to work every day, who don’t feel safe in their community. That’s a problem. “I remember being a kid and people telling me I didn’t belong in my sport because of my skin color, because I was Muslim. So if I can be a source of change for other minorities I feel fortunate to be able to do that.”