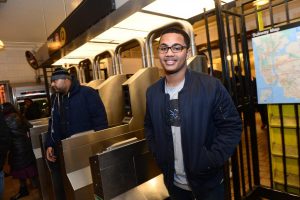 Ahmed Khalifa, 17, a Midwood High School student seeking to go to Ohio State, chased down a homeless man who struck a Jewish woman on the train near the Newkirk Avenue Station in Brooklyn.

Ahmed Khalifa, 17, of Midwood chased down Rayvon Jones, 31, after he decked the woman, who was simply reading a book on a Coney Island-bound Q train near the Newkirk Ave. station at about 7:50 p.m.

The woman suffered a gash on her lip, swelling and bruising. She was taken to Methodist Hospital in stable condition.

Khalifa said he was riding the Q home after working a shift at the public library near Grand Army Plaza.

He had his headphones on when he heard a commotion. He looked up and saw Jones hit the woman, who was sitting in a seat.

The impact smashed her glasses, and she dropped to the floor and was unconscious for a few seconds, he said. Another woman rushed to her side to help her.

Jones took off. Khalifa held the subway doors and yelled at the conductor to stay in the station and call for help.

“A lady told me to run after the guy,” he said. “It took me a while to catch up. He started sprinting”.

Khalifa lost Jones and then spotted a police car. He tried to flag it down.

An Orthodox passerby asked him what happened. Khalifa told him, then the man offered to help track down Jones.

“He was driving, so I got in,” he said. “We were just talking about how it was a hate crime. We found him at the bus stop and called the Shomrim”.

Numerous members of the Shomrim, the Jewish safety patrol, arrived to help find Jones. One of the men was driving a 2017 Porsche.

Khalifa spotted Jones at a bus stop and the posse waited quietly while he got on the bus and cops arrived.

“I got out and looked at the window and yelled, ‘Get out you coward why are you trying to hide!’ ” he said. “He pulled on his hoodie like he was trying not to be recognized”.

The police started removing people from the bus, and Jones got violent.

“He was screaming just horrible things,” he said.

When the cops pulled him out of the bus, he struggled and shouted, “Don’t touch me!”

In the police car, Jones kicked both doors so hard that he broke them to the point where they wouldn’t open.

In the end, one of the Shomrim members drove Khalifa home.

“Some people are like ‘she's Jewish, why did you help her,’ ” he said. “I'm like everyone is equal. I treat everyone the same way”.

Khalifa said he doesn’t want to be called a hero. “It was just something anybody should do,” he said. “It's not that big of a deal to me”.

It’s not the first time Khalifa has gone out of his way to help someone. Seven months ago, he helped pull a suicidal homeless man away from jumping into the tracks from a train.

“I grabbed him and pulled him inside,” he said. “Cops were at the next station. It was an F train coming from Manhattan”.

Khalifa says he has a 91 average at Midwood High School, and plans to study mechanical or electrical engineering. He hopes to attend Ohio State University.

Jones was charged with assault, and was awaiting arraignment Wednesday in Brooklyn Criminal Court.