By Olivia Rondonuwu for Coconuts Jakarta 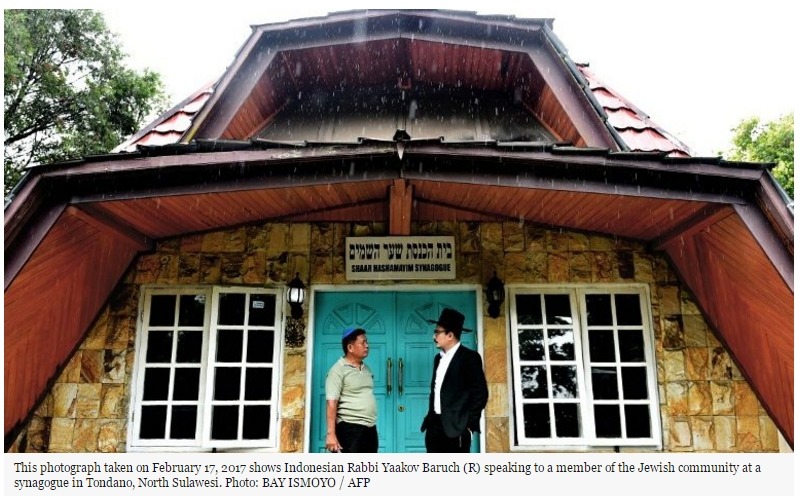 In a remote corner of the Indonesian archipelago, a modest synagogue stands in a tiny Jewish community that has found acceptance despite rising intolerance in the world’s most populous Muslim-majority country.

The red-roofed building on Sulawesi island is the only synagogue in the nation of 255 million people. Here, unlike other parts of the country, the Jewish community feel safe to practice their faith openly.

“We can wear the kippah (Jewish skullcap) in the mall or anywhere we want, it’s not a problem,” Yobby Hattie Ensel, a Jewish leader from the nearby city of Manado told AFP.

In Tondano, the “Shaar Hasyamayim” synagogue sits close to several churches and residents of different religions live, work, and worship alongside each other without incident.

Indonesia has long been praised for its moderate, inclusive brand of Islam — and this enclave of diversity is a testament to that.

But across the archipelago, intolerance has risen in recent years as more conservative forms of Islam have become popular, driven by increasingly vocal hardline groups.

Tensions in the Middle East, particularly between Israel and the Palestinians, spill over here and deepen religious divides.

Outside the safe haven on Sulawesi, those who refuse to hide their faith have faced hostility.

Yaakov Baruch, an Orthodox Jew who runs the Tondano synagogue, revealed how he was threatened with death in a busy Jakarta mall as he walked along with his pregnant wife.

“From a few floors up, they shouted at me ‘Crazy Jew’,” he told AFP, adding the group of men then ran towards him and demanded he remove his skullcap.

“They said to me: ‘We don’t want you to use your kippah in this country. If you continue to use it, we’ll kill you’.”

In 2013, the country’s only other synagogue in the city of Surabaya was demolished. It had been the site of anti-Israel protests for years, and was sealed off by hardliners in 2009 and left to decay.

Indonesian rabbi Benjamin Verbrugge concedes any flare-up of tensions in the Middle East provokes hostility towards the local faithful.

“Problems between Israelis and Palestinians are a liability for me — when someone is stabbed there, it makes me uneasy here,” he said.

Faced with such open hostility, the Jews in the capital worship in secret.

Last month Verbrugge, head of the United Indonesian Jewish Community (UIJC), held celebrations for the festival of Purim, traditionally one of the most joyous days in Judaism’s calendar, hidden in a small hotel room with a handful of fellow worshippers.

The UIJC estimate there are around 200 practicing the faith in the country, believed to be the descendants of traders from Europe and Iraq who came to Asia to trade. The organization was set up to bring the nation’s Jews together.

The Jewish population in Indonesia is believed to have peaked at around 3,000 in the years before World War II, according to Rotem Kowner, a professor from the University of Haifa in Israel.

The fact that those remaining are scattered across the archipelago means Verbrugge has to defy rules that forbid Jews from using electrical gadgets on the Sabbath to lead group prayers online via the LINE messaging app.

The small community also faces more practical challenges, such as the fact kosher food is not widely available in Indonesia, said Phinechas, a local convert to Judaism.

Faith-based tension has been mounting in Indonesia, undermining its pluralist reputation.

Christian churches and mosques where Muslim minorities pray have been closed due to pressure from hardliners. Shiites and Ahmadis — regarded as heretics by some Sunnis — have been forced from their homes in mob attacks and on occasion even killed.

Successive governments have been criticized for failing to tackle the radicals for fear of being accused of attacking Islam.

Due to their small number and the fact most live in the shadows, the nation’s Jews have not been a major focus of radical Islamic anger in Indonesia and have largely escaped the serious attacks directed at other minorities.

But having a low profile also brings problems.

According to the law, freedom of worship is guaranteed for all religions, including Judaism, but in practice Jews cannot be honest about their faith.

ID cards are vital for accessing government services, and for doing things such as registering marriages and births, meaning most Jews lie and put “Christianity” on the documents.

The religious affairs ministry said in 2013 people who do not follow one of the six authorized faiths can choose to put nothing on their cards, but Indonesian Jews AFP interviewed had all put “Christian” to avoid drawing attention to themselves.

Despite the challenges, Indonesian Jews nevertheless insist they are an integral part of the nation.

Baruch said: “ Jewish community of Indonesia, we were in this country far before the country was born. It means we are part of this country as well.”