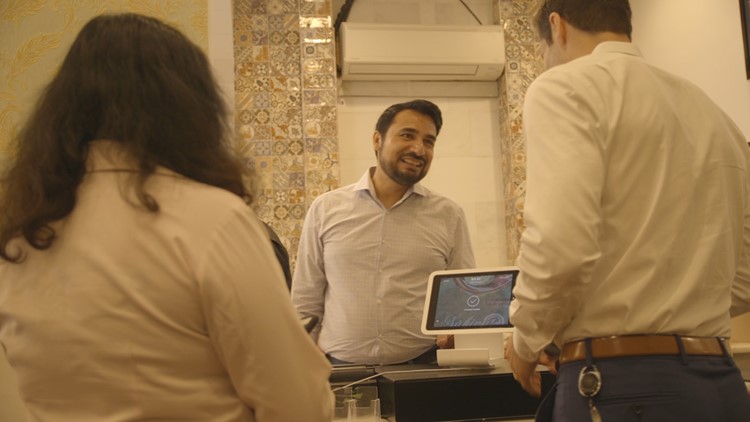 The owner of a halal restaurant in Washington DC has been offering free meals to homeless on a daily basis to honor his mother’s traditions.

“I prayed to God that if I ever have a restaurant, I will announce on the first day that I will bring in the homeless people,” Kazi Mannan, the owner of Sakina Halal Grill, a restaurant located just blocks away from the White House, told ABC 13 News Now.

“You can come in hundreds, I will never say no… you’re welcome to eat free with respect and dignity. We will treat you the same.”

Kazi was raised in a small village in Pakistan. Though living in poverty, with 11 siblings, his mother taught him to thank god for all his blesses, as well as sharing food with the needy.

“My mother, I really greatly appreciate how she taught us in our upbringing to thank God, that was the attitude,” said Kazi.

When cooking dinner, Kazi’s mother, Sakina, would send her children to deliver some food to their neighbors, even though their supply was extremely limited.

“That was her way of worshipping God,” said Kazi.

So, when Kazi landed in the United States, he carried with him just $3 and his mother’s teachings.

After years of hard work, Kazi thought of opening a restaurant as a way to give back.

“I used to cook at home and my friends were like, ‘Why don’t you open a restaurant because you cook so good?’” Kazi recalled.

“Many friends said, ‘Don’t let homeless people come inside your restaurant. They will ruin your business,’” recalled Kazi.

“It’s inside of my heart that I have food and another person who can’t afford it doesn’t. If I fail, I fail! I don’t care. It’s humanity.”

On the opening day in 2013, Kazi walked to a nearby park and invited dozens of homeless individuals to his restaurant.

In just five years, those first dozen customers turned into thousands. Kazi estimates he feeds 16,000 people in need each year.

“No matter what power you have, what job you have. If you just think about other humans… lay on your back and think about how God wanted us to love each other.”

“If you want to worship God, you have to show kindness to his creation,” said Kazi.

“He created us to treat each other with kindness and love… worship is not just you isolate yourself in the temple, mosque, church where you just sit and do worship. Worship is a lot of action that you do in your life.”