In the latest episode of American Islamophobia, the campus of University of Central Florida was put on lockdown after reports of “a Middle Eastern gunman” – no gender given – began circulating. Police with assault rifles and news helicopters rushed to the library, with one cop accidentally discharging his weapon into his vehicle while on route – only to find that their “gunman” was a young woman in a hijab and a copy of the Qu’ran.

It’s a show of disgusting religious profiling that unfortunately all too common in Trump’s America. The young woman in question was working in the library, took a few moments to pray in the stairwell, and walked out of the library as confused and scared as all the rest of the students. The fact is that the overwhelming majority of mass shootings are committed by white men – but as soon as someone said “Middle Eastern” the university and police all jumped to conclusions. The library was evacuated, news crews descended on the scene – and it turns out the whole incident was a nothing but staggering waste of time and money over a hoax perpetrated by some unknown racist.

UCF and their campus police should be ashamed of themselves for highlighting the fact that the nonexistent shooter was a “Middle Eastern,” implying that a mass shooting by a Middle Eastern person is inexplicably worse than one committed by anyone else. It is exactly this kind of discriminatory paranoia and suspicion that alienates Muslim-Americans from the rest of society and contributes to division within our already polarized society. The constant fear-mongering by Republican politicians have left the ignorant and the prejudiced terrified of “terrorists” under their beds, distracting us from the real issues facing our country – like institutionalized racism and ethno-nationalist scapegoating. People of every religion, every color, every gender deserve the benefit of the doubt- and deserve to be treated with more respect than this. 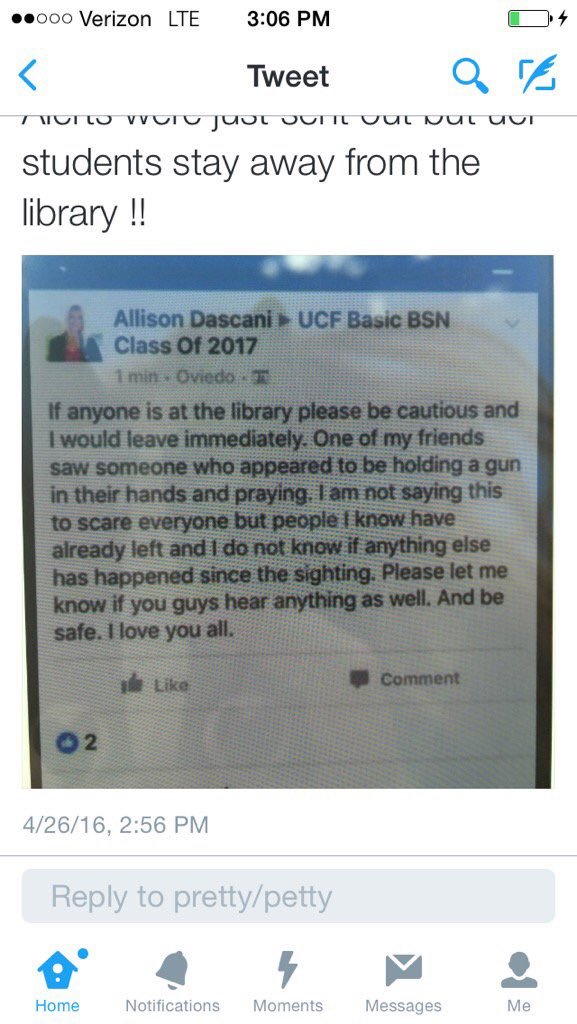 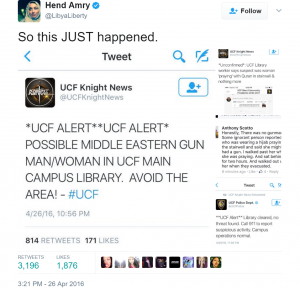