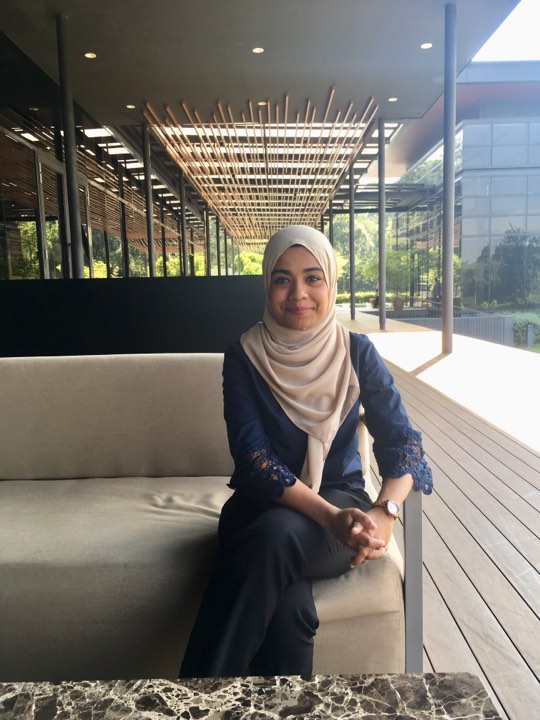 Despite being dominated mostly by non-governmental organizations, the women’s rights movement in Malaysia also contains pockets of small, but thriving youth-led initiatives. One such feminist initiative is the online platform The G-Blog.

I spoke to its founder and editor Emellia Shariff recently.

1. Hi, can you please introduce yourself to the readers?

Emellia Shariff: My name is Emellia, but you can call me Em. I’m 28 years old. After graduating from law school, I practiced law for about two years and now I work in the same field for a property developer in Malaysia.

I am also the Chief Executive Editor of The G-Blog, a multi-faceted platform which aims to encourage discourse surrounding gender issues in Malaysia. As far as I can remember, I’ve always been passionate about gender issues, especially when it comes to the inevitable intersections of gender issues in various aspects of my life. I guess, you have no choice but to be passionate about something if it has such huge impact on your life, right?

2. You are clearly a passionate feminist. What do the words 'feminist' and 'feminism' mean to you?

Em: Yes, I identify as a feminist. Feminism is synonymous with the emancipation of women and other oppressed minorities from the tyranny or patriarchy. As a feminist, I believe that feminism is gender-less because, while we have to acknowledge that women is its biggest and gravest victim, patriarchy also negatively affects men. So feminism to me is more than just a theory, but also a way of life and a state of awareness that everyone needs to put themselves in to make the world a better place.

3. You have a day job. How do you juggle them with managing The G-Blog?

Em: The G-Blog is a passion project. So while it takes up quite a bit of my time, it is something that I look forward to, which makes it a lot easier to manage. I remember telling [partner] Shakirah Rahman when we started working together that the G-Blog is supposed to be fun, it is supposed to be something that gives us excitement and fulfillment and something to smile about at the end of the day. So we promised each other to not stress ourselves out too much over it. Sometimes we fail terribly because we have to keep our discipline with the posting schedule and ensure good quality content, but most of the time we try to have as much fun as possible at work.

4. Can you tell me how The G-Blog started?

Em: I founded The G-Blog about 3 years ago. At first, all I wanted was to have my own blog where I could write about the things that matter. After months of planning, brainstorming and testing out some ideas, I realized that the best way forward was for the blog to serve as an open and honest platform for everyone who has a story to tell. From there, it expanded to become The G-Blog where it provides an avenue for average Malaysians to not just speak up their mind, but also rally support and call for action.

But one thing remains the same, The G-Blog has always been about highlighting gender related issues in Malaysia and encouraging discourse surrounding them. I wanted to work with other Malaysians to prove that gender issues are not just about stories of rape or incest that appear on the news every once in a while and then die out after 2-3 days. It is something that should not be put at the back seat. Gender issues affect everyone, on a daily basis and intersect with various aspects of an individual’s life. It is something that should be taken seriously.

Em: In the short term, I want it to keep running, and we keep posting articles without fail. Long term: I want The G-Blog to expand and take up more projects, especially under our Advocacy wing.

6. What have been some of the obstacles that you had to face in setting up and running the website?

Em: Well, one of the most consistent obstacle is money. Since The G-Blog does not receive any third-party funding, we have to bootstrap our operational and capital expenditures and use our own money.

Also, we used to get some questions as to why we’re focusing on “gender” rather than “women” which was quite exhausting to deal with. But generally, a lot of people have been super supportive and we would not be where we are today without these amazing people behind us.

7. How did you and Shakirah Rahman get to know each other?

Em: After I decided to have a team of people managing The G-Blog, I started looking for candidates. I did a lot of research on young, up-and-coming individuals and the work they do. I found Shakirah, contacted her, set a meeting, and pitched The G-Blog to her and bam! She just couldn’t say no.

8. It is common for girls and women to face discrimination in one way or another in their lifetime. What are some inequalities that you have faced so far?

Em: I’ve been discriminated because of my looks a few times. Since I wear the hijab to work, I realised that the files or projects that are given to me are more conservative -to put it politely. There was this one time, I greeted my client whom I was meeting for the first time. We had spoken on the phone a few times to discuss his case. Before I could introduce myself, he told me to get him a cup of coffee, thinking that I was the coffee lady.

9. Can you tell me how your childhood has shaped you to become the woman that you are today?

Em: Growing up, I’ve only known one type of woman – smart, strong and independent. My mother is a single parent who worked really, really hard to raise her 4 kids. She had 3 jobs from dusk to dawn while managing our needs and the house. She has never complained, and she always encouraged us to study hard to have a better life in the future. A lot of people told her to re-marry after the divorce, basically saying that she should re-marry quickly while she still has the looks. Every time, she would brush it off saying she has been married long enough to know that a husband is not what she needs or what will make her life easier. Now, I know that I can be smart, strong and independent too. And when people tell me that I should get married, I repeat the same thing my mother said 20 years ago.

10. Was there a significant moment that made you say, "Okay, I'm a feminist" or "I am going to work to improve gender equality"? Can you tell me more about it?

Em: It started out as an extremely individualistic cause – I wanted to make my life better, I wanted to be able to wear new clothes on hari raya (eid celebrations) and I wanted to go out and explore the city without worrying about my safety. So I became a lot more vocal about these things, fighting for things I felt like I deserved. As I grew older, I met more people and I realised that hardships, lack of access to opportunities and discrimination are not exclusive to me,  that there are so many people out there who have a difficult life, often times much worse than me. That was when I realised that it is not just about me against the world, but it is a fight against something a lot more entrenched, systemic and oppressive than that. So I became more aware and sensitive of the people around me and formed allies to collectively fight for the better future that we all deserve.