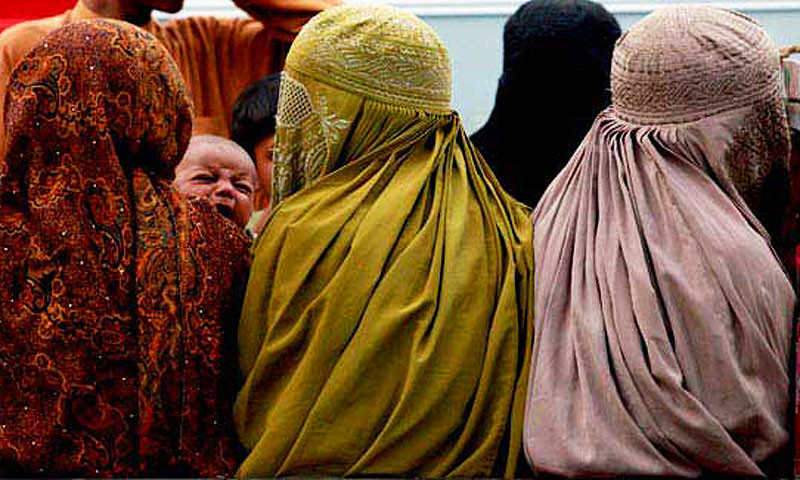 As a woman, life gives me a very tough time. Illiterate, dependent, servile, and powerless, I have to survive against society and its forces. This is not a rare cry. Much of the sisters share one or other parts of my story. Our stories complement each other but they are not told very often.

I am a teen girl studying at a religious seminary. When I was 15, I got married to a man of 25. The whole experience was terrifying, but being a girl, I was taught how to tolerate anything. Some weeks ago, my husband had an argument with his father about some property issues. When I came back from my seminary classes and was about to enter my husband's house, a woman came from behind me, covered me with her dupatta, and asked me to move towards my father's house, saying, "This house is no more yours to enter. Your husband has divorced you." In the evening, I received three stones as evidence of the divorce. My husband had shown his anger to his father this way.

I am the widow of a man who had killed or helped in killing some men years back. He was killed last year by relatives of one of the men he murdered. My husband's second wife, a widowed sister of his, and our mother-in-law live with me. Last Sunday, a teen (whose father was killed by my husband) killed my father-in-law after he was taunted by one of his cousins.

"See! That man killed your father and his father is still roaming in front of you. Are you that much honor-less to let him live?" We are four widows in this village house now. We never were allowed to work and earn for ourselves. We still are not earning because we cannot go out. For how long will the alms of the neighbours keep us fed and alive I wonder.

I am a mother of seven children, and I was married for 25 years. Last night two of my boys went to meet my mother and brothers at their Grandma's home. When they came back, my husband had the door shut on them. He was shouting at me. The elder boy entered the house from his uncle's door and told his father that he is not supposed to shout at me for visiting his maternal uncles. His father, not used to such interventions, told him to get out. The boy, being a young blood, wanted to talk some sense into his father, and told him that things do not work that way, and started to step out of the house. That was when my husband shouted, "You put your foot out of my house and your mother is a divorcee. I will not keep her anymore.

Now, I am sitting in my room, knitting the dress of one of my future daughters in-law, and am thinking, "Where do I stand in this house I had built for 25 years? Do I even matter here, though I had worked all alone to raise my children and keep the house for my husband when he was away in Dubai? I had left my father's home and now one other girl is going to  be the daughter in-law of this house." Thoughts are dripping out of my skull through my eyes. With wet eyes and an aching head, I am sitting here. What else can I do?

Atiq is a student and belongs to the tribal area of Pakistan.