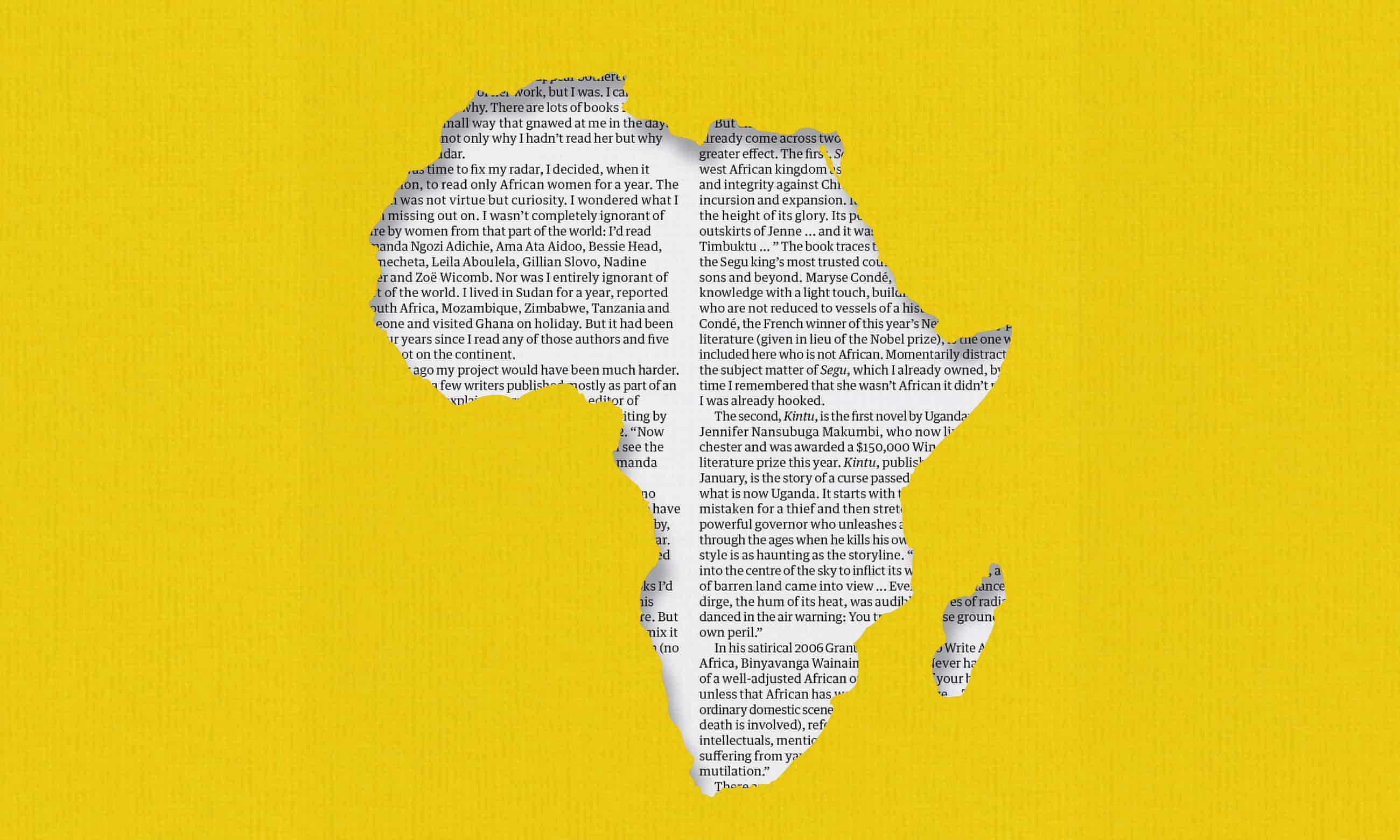 Chibundu waved away my apology with generous indifference. We carried on chatting and were among the pioneers on the dancefloor.

Chibundu did not appear bothered by my ignorance of her work, but I was. I can’t say exactly why. There are lots of books I haven’t read. But in some small way that gnawed at me in the days ahead, I wondered not only why I hadn’t read her but why she wasn’t on my radar.

Feeling it was time to fix my radar, I decided, when it came to fiction, to read only African women for a year. The motivation was not virtue but curiosity. I wondered what I had been missing out on. I wasn’t completely ignorant of literature by women from that part of the world: I’d read Chimamanda Ngozi Adichie, Ama Ata Aidoo, Bessie Head, Buchi Emecheta, Leila Aboulela, Gillian Slovo, Nadine Gordimer and Zoë Wicomb. Nor was I entirely ignorant of that part of the world. I lived in Sudan for a year, reported from South Africa, Mozambique, Zimbabwe, Tanzania and Sierra Leone and visited Ghana on holiday. But it had been at least four years since I read any of those authors and five since I set foot on the continent.

Not so long ago my project would have been much harder. “It used to be just a few writers published mostly as part of an educational series,” explains Margaret Busby, editor of Daughters of Africa, the landmark anthology of writing by women of African descent, which came out in 1992. “Now they are in the mainstream. I think publishers can see the success they can have with someone like Chimamanda and of course they want that success too.”

But it’s still not as easy as it might be. “Until you can no longer count the number of African women writers who have broken through then we’ve still got work to do,” says Busby, whose sequel, New Daughters of Africa, comes out next year.

My original approach was not methodical. I just started with the books on my shelf, posted an appeal for recommendations on Facebook and then took the books I’d read and went to Amazon’s “Customers who viewed this item also viewed” section to see what else was out there. But when, by around Easter, it became clear that if I didn’t mix it up I could spend the whole year reading Nigerian women (no bad thing, just not my plan), I made an effort to seek out writers from various parts of the continent.

With the year almost up I have read 18 books by authors from Morocco, Ghana, Zimbabwe, Nigeria, Sierra Leone, Senegal, Egypt, Somalia, Uganda, Ethiopia and Cameroon.

There have been love stories, short stories, multi-generational sagas, political novels, ghosts, infertility, coups, occupations and migration stories, written in the voices of white English men and women, first, second, third and fourth wives, children, slaves and slavers, ranging over four continents and in every century from the 16th onwards.

The book most often recommended to me was Homegoing by Yaa Gyasi, a 29-year-old Ghanaian American writer based in Berkeley. This debut novel from 2016, which won a slew of awards, is a saga spanning the Atlantic and many generations. It starts in an 18th-century Asante village and follows the descendants of Maame, who has two daughters. One is married to the British governor running Cape Coast Castle; the other, Esi, is enslaved in the dungeons below. Each chapter then follows their offspring, in Africa and the US. Panoramic in its scope, Gyasi’s book is a bold effort.

But chances are I’d have appreciated it more if I hadn’t already come across two books that use the same device to greater effect. The first, Segu, tells the story of the eponymous west African kingdom as it fights to maintain its traditions and integrity against Christian, Muslim and foreign incursion and expansion. It starts in 1797, when “Segu was at the height of its glory. Its power stretched as far as the outskirts of Jenne ... and it was feared as far away as Timbuktu ... ” The book traces the lineage of Dousika Traore, the Segu king’s most trusted court adviser, through his four sons and beyond. Maryse Condé, 81, employs her historical knowledge with a light touch, building complex characters who are not reduced to vessels of a historical moment. Condé, the French winner of this year’s New Academy prize in literature (given in lieu of the Nobel prize), is the one writer included here who is not African. Momentarily distracted by the subject matter of Segu, which I already owned, by the time I remembered that she wasn’t African it didn’t matter – I was already hooked.

The second, Kintu, is the first novel by Ugandan-born Jennifer Nansubuga Makumbi, who now lives in Manchester and was awarded a $150,000 Windham-Campbell literature prize this year. Kintu, published in the UK in January, is the story of a curse passed through generations in what is now Uganda. It starts with the mob killing of a man mistaken for a thief and then stretches back to the story of a powerful governor who unleashes a curse that reverberates through the ages when he kills his own son. Makumbi’s prose style is as haunting as the storyline. “Just as the sun moved into the centre of the sky to inflict its worst, o Lwera, a region of barren land came into view ... Even at this distance, a dirge, the hum of its heat, was audible. Waves of radiation danced in the air warning: You traverse these grounds at your own peril.”

In his satirical 2006 Granta essay, How to Write About Africa, Binyavanga Wainaina advises: “Never have a picture of a well-adjusted African on the cover of your book, or in it, unless that African has won the Nobel prize ... Taboo subjects: ordinary domestic scenes, love between Africans (unless a death is involved), references to African writers or intellectuals, mention of school-going children who are not suffering from yaws or Ebola fever or female genital mutilation.”

There are plenty of portrayals of ordinary domestic scenes and love between Africans in this motley collection. But rare were the west African, and particularly Nigerian, works that did not find ample material in polygamy. If you think of how much drama English literature has managed to extract from monogamy, we probably shouldn’t be surprised. When African men write about polygamy it is generally treated, at best, as a problem to manage: keeping peace among the wives. But, not surprisingly, female authors engage with it differently. It is for the women to manage the humiliation, competition, jealousy and rancour brought about when a man invites another woman to share his bed and compound. A pecking order emerges among wives and children, in a range of abusive relationships between men and women, women and women and women and their children, producing rivalries that propel plots.

The most tender of these accounts is also the shortest – the 95-page So Long a Letter, published in 1979, by the Senegalese author Mariama Bâ, who died aged 52 in 1981. The book takes the form of a letter from Ramatoulaye Fall to her best friend Aissatou on the death of Ramatoulaye’s husband Modou, who has abandoned her and their 12 children and taken one of their daughter’s best friends as his second wife.