By Patrick Kingley for The New York Times 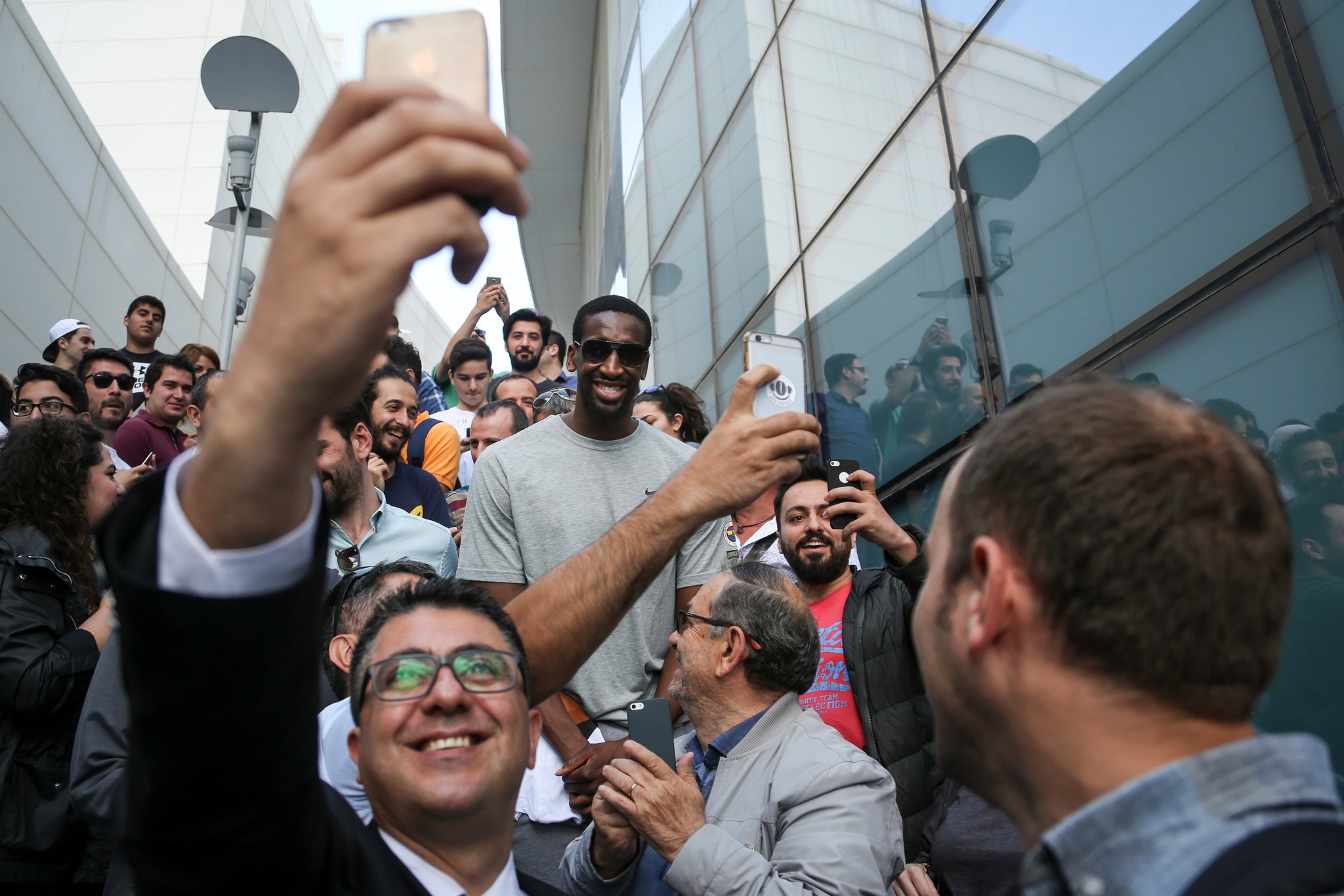 Ekpe Udoh, an American who played six seasons in the National Basketball Association, has become a fan favorite in his two seasons in Turkey. Credit Tara Todras-Whitehill for The New York Times

The American basketball player Ekpe Udoh ambles through his club in Istanbul the way a modern-day Gulliver might walk through Lilliput.

Mr. Udoh, 30, is a 6-foot-10 colossus. The hundreds of Fenerbahce fans waiting for him are significantly shorter. And like the diminutive Lilliputians in Jonathan Swift’s satire, they don’t want to let this giant out of their sight.

These fans, however, come in peace — they want a selfie with him, not his freedom. “Ekpe, this way!” He turns, he smiles, they click. “Ekpe, over here!” Turn. Smile. Click. Wading down a short series of steps, Mr. Udoh takes seven minutes to reach the street below.

“He’s not just a player,” says one 29-year-old fan, Emre Elmas, when asked to explain his devotion to Mr. Udoh. “He researches the Turkish culture. He understands the Turkish people.”

Mr. Udoh, a former center and power forward for the Golden State Warriors, and Milwaukee Bucks in the National Basketball Association, is by no means the first American to play basketball in Turkey. American teachers brought the sport here in the first decade of the 20th century (and an American television series, “The White Shadow,” popularized it in the 1980s).

Nor is he the only American currently plying his trade here: 131 of his countrymen played for Turkish clubs this past season.

He can, however, lay claim to being the most popular. His on-court achievements help. In his two seasons with Fenerbahce, Turkey’s leading club, he has helped it win two domestic titles as well as this year’s championship of the Euroleague, the world’s most competitive league outside the United States.

But it is his behavior off the court that has contributed most to Mr. Udoh’s renown.

He runs a book club for his more literary fans — memorably sending them Sabahattin Ali’s Turkish classic, “Madonna in a Fur Coat,” to read last November. 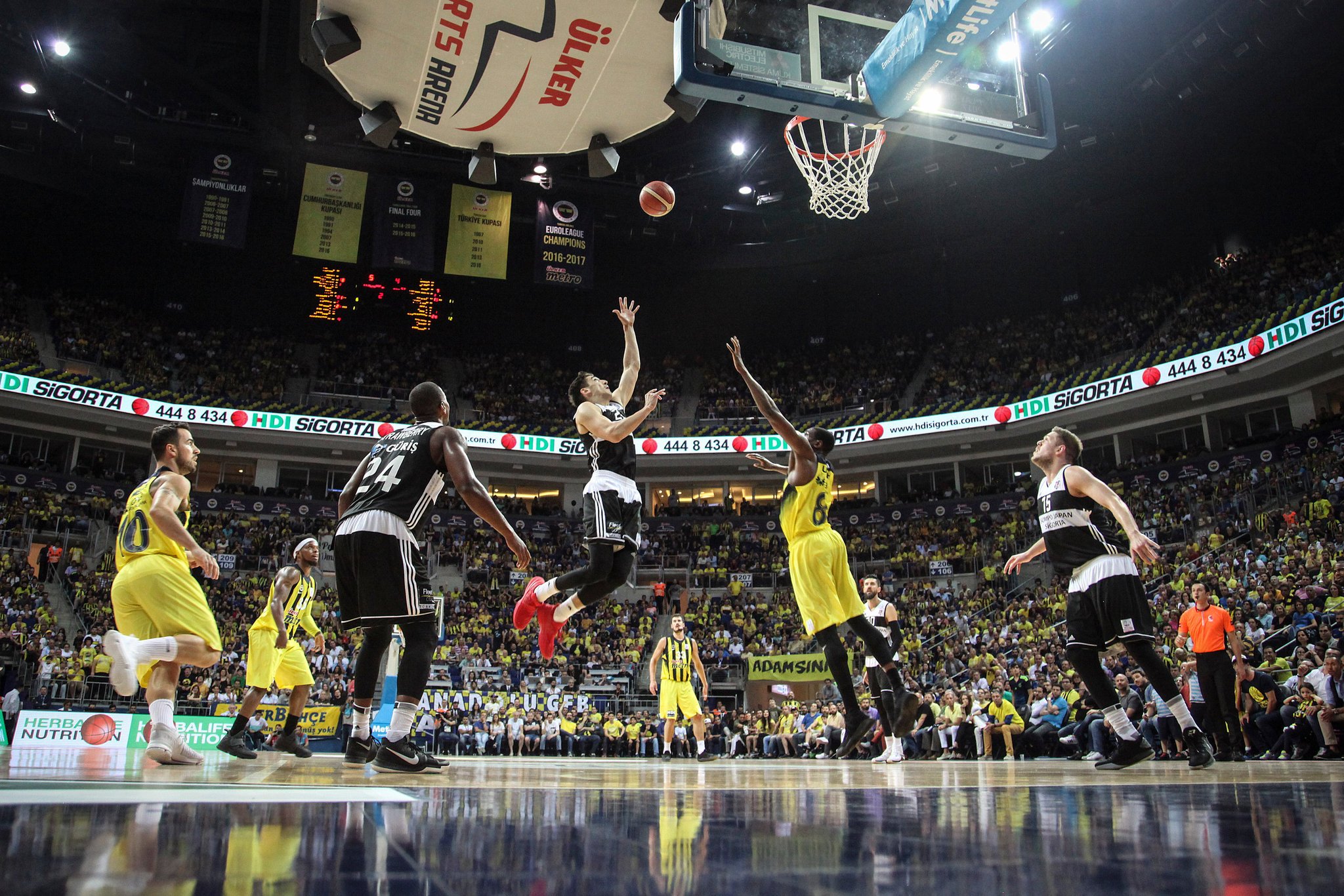 Mr. Udoh, second from right, in a game for the Turkish team Fenerbahce against Besiktas in June. Credit Tara Todras-Whitehill for The New York Times

He plunged into what he called his “Ataturk project,” a personal crash course in the life and ideas of Mustafa Kemal Ataturk, the founder of modern Turkey.

He keeps a photo blog of his favorite Istanbul restaurants, at one point finding his way to Ciya Sofrasi, an acclaimed Anatolian kitchen once profiled in The New Yorker.

He has organized a cinema night for a group of fans and visited schools. He sent high school seniors a good-luck message ahead of their exams. “I never saw something like that in my entire life,” said one student who appreciated the gesture, 17-year-old Zehra Tanguzer. “He’s not just Ekpe Udoh the basketball player. He’s like a big brother.”

“There have been many American basketball players in Turkey since the 1980s, and they were also talented, but Ekpe is different because of his relationship with the fans,” said Caner Eler, the editor of Socrates, Turkey’s leading sports magazine. “He has a beautiful awareness of the other sides of life, outside sports.”

By his own admission, Mr. Udoh was not always so enthusiastic about his move to Turkey. After he signed with Fenerbahce in mid-2015, it took him several months to admit that his N.B.A. dream was — for now — over. After five middling seasons at Golden State and Milwaukee, he had just spent a depressing year on the bench with the Los Angeles Clippers, averaging less than four minutes a game.

Arriving in Istanbul, Mr. Udoh felt depressed and lonely, thousands of miles from his family and friends. The son of Nigerian immigrants — his father a radiologist, his mother a nurse — he spent his childhood in Oklahoma and most of his college days at Baylor University in Texas. Little had prepared him for a life abroad.

“Hoo, that was brutal,” Mr. Udoh remembered during a recent courtside interview. “I probably didn’t accept it until January, February that I was overseas.” Finally, he thought: “Yeah, I’m here. Let’s make the most of it.”

And that, initially, involved deciphering the identity of the man whose face looms over most offices and shops in the country. Mr. Udoh found this face hard to escape — first seeing him in the gym, then in his apartment. “You’re like: Who is this man?” Mr. Udoh said. “Yeah, he must be important.” 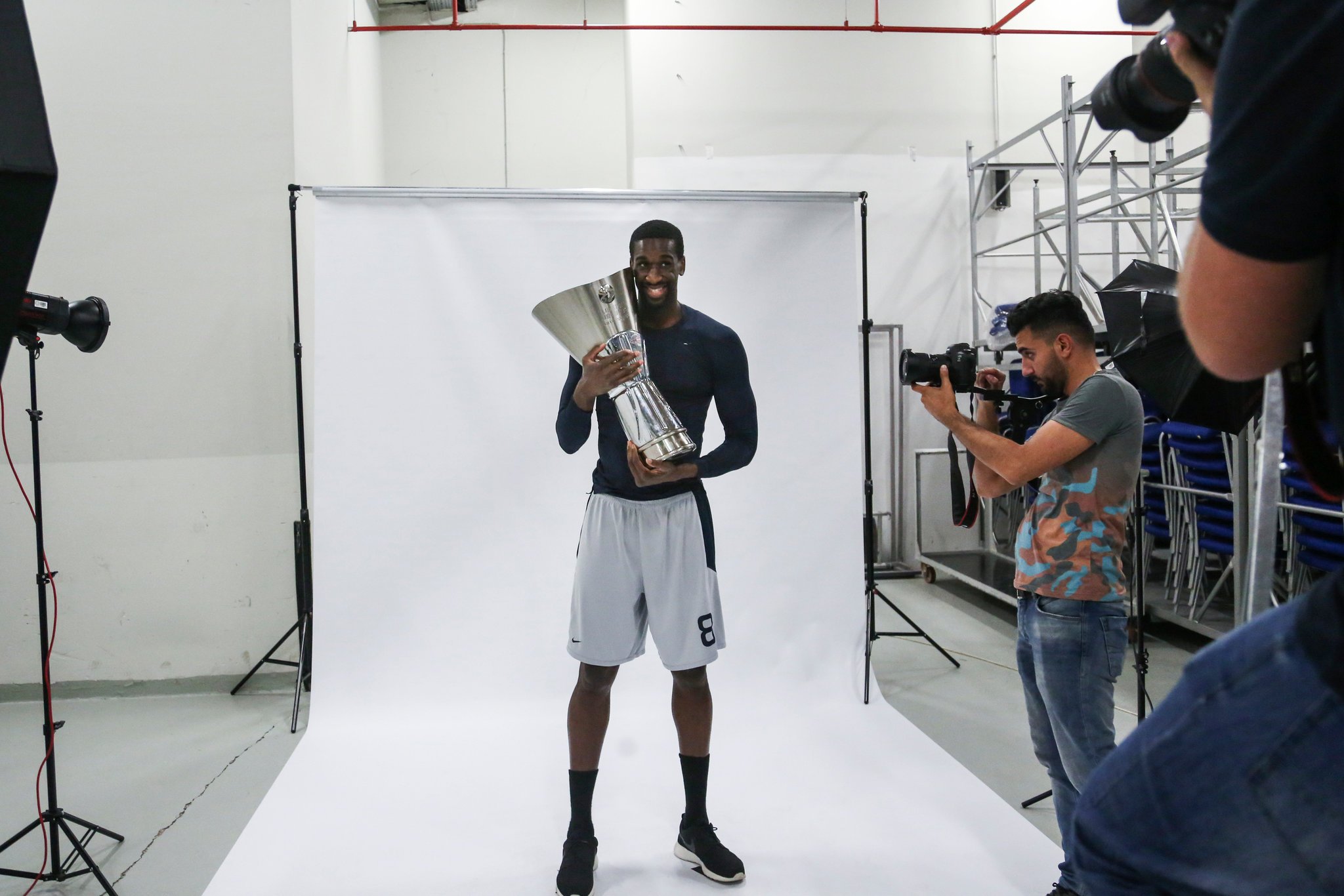 Mr. Udoh with the Euroleague championship trophy. When he arrived in Turkey in 2015, Mr. Udoh thought: “Yeah, I’m here. Let’s make the most of it.” Credit Tara Todras-Whitehill for The New York Times

This man, of course, was Ataturk. And as time went on, Mr. Udoh became increasingly interested in him — visiting a museum devoted to Ataturk’s life, posting photographs of himself standing next to Ataturk’s portraits and buying two Ataturk biographies. A picture of him with the latter went viral on Turkish social media. 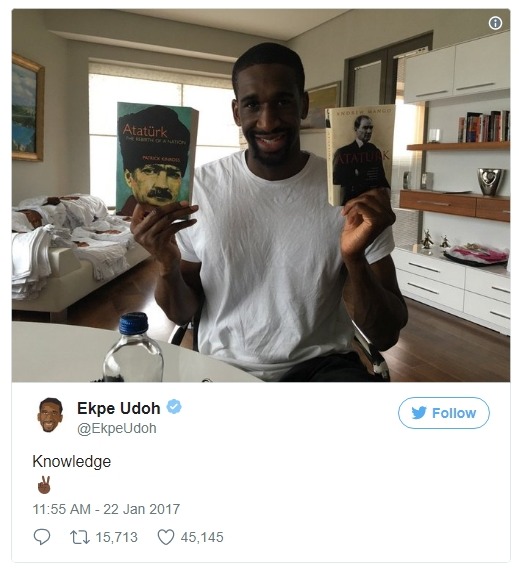 “Of course he wasn’t perfect,” Mr. Udoh said. But, he added, “I like him a lot because of women’s rights — he pushed women to do more, be intelligent.”

“I was impressed,” he said.

There is little pretension to Mr. Udoh’s curiosity. When asked by one Turkish journalist about Orhan Pamuk, Turkey’s best-known living author, Mr. Udoh replied: “Who’s that?”

And when pressed on his recent meeting with President Recep Tayyip Erdogan, after Fenerbahce’s Euroleague triumph, Mr. Udoh was more interested in discussing the leader’s vast, 1,100-room palace.

“It makes the White House look like a regular house. It is incredible how big this place is,” Mr. Udoh concluded. “Sheesh! And guards are everywhere possible.”

Security has been a frequent concern for Mr. Udoh since his arrival. His two years in Turkey have coincided with an attempted coup last summer and two terror campaigns (one by the Islamic State, the other by Kurdish nationalists), including a New Year’s Eve attack at Reina, a popular nightclub that lies across the Bosporus from Mr. Udoh’s apartment.

When an Islamic State activist killed 39 people there, Mr. Udoh had already prayed and gone to bed. But when he awoke in the morning, news of the attack touched a nerve.

“The fact that I’ve been there — you know, we celebrated our Turkish championship there last year — and this is right across the water, you got international people dying. That’s too close,” Mr. Udoh said. “You’re, like, looking death in the eyes almost.” 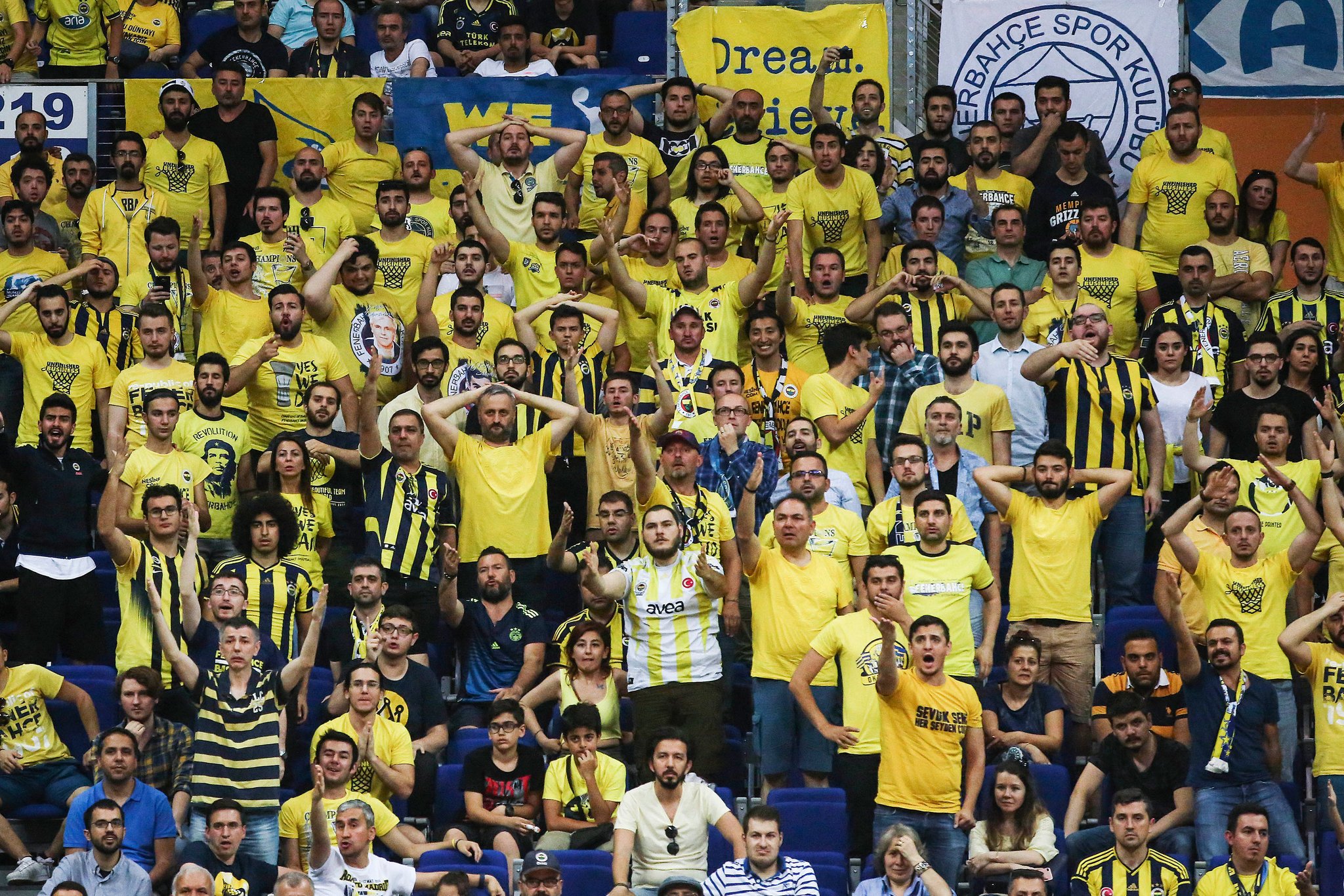 Fenerbahce fans during the game against Besiktas. “He understands the Turkish people,” one fan said of Mr. Udoh. Credit Tara Todras-Whitehill for The New York Times

But in general, Mr. Udoh said, he has been surprised by how normal and pleasant Turkey is — in fact, not so different from what he was used to at home.

“Living in the States, you see the bombings, you see how the agenda on Muslims is right now in the world,” said Mr. Udoh, who had previously left the United States only a handful of times. “So you’re like, ‘Oh, my god, how do I deal with all this whoop-de-whoop’ and whatever? Then you get out here, and it’s like, ‘Oh, man, it’s beautiful.’”

In fact, the disjunction between what he had been led to believe about Turkey and his experience living here inspired him to question much of what he knew about his home country.

So in tandem with his Turkish studies, Mr. Udoh began to re-examine what he knew of black history in America. First he read “The Immortal Life of Henrietta Lacks,” which explores medical experimentation on black Americans. Then he took on Harriet A. Washington’s “Medical Apartheid,” which addresses the same issue.

This process of discovery and improvement continued on the court. In the United States, Mr. Udoh was considered a weak offensive player. But since he arrived in Turkey, basketball experts say, his shooting and attacking play has improved — a change that Mr. Udoh attributes to Fenerbahce’s coach, Zeljko Obradovic.

Once American players end up in the Euroleague, they rarely return to the N.B.A. But Mr. Udoh’s transformation has been so formidable that some think he can be an exception, with rumors of a move to the Philadelphia 76ers this summer. (“No comment,” Mr. Udoh said.)

Some of Mr. Udoh’s fans cannot believe he would accept such a move, so enthusiastic has he been for all things Turkish. “He won’t leave,” said Mr. Elmas, the fan outside Fenerbahce stadium. “He loves it here.”

But the likes of Mr. Elmas may soon be dealt a cruel blow. “At the end of the day, it is a business as well,” Mr. Udoh said coyly. “And the N.B.A. is the best league in the world. Who doesn’t want to be at the best, you know?”