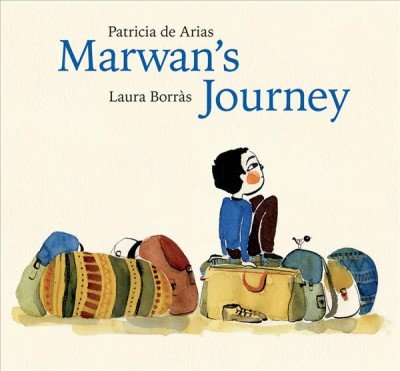 In the world of adults, the Supreme Court has upheld a travel ban from some mostly Muslim nations, and refugee arrivals from Syria as well as other Middle East hot spots have slowed to a trickle. Political leaders claim refugees are a threat. But in the world of children's literature, there's a new trend towards putting stories about resilient young Muslim refugees front and center.

More than a dozen books are due out this fall, from picture books for toddlers to complex novels for the teen audience. The new crop adds to a growing list of titles that present a positive image of refugees, humanizing and personalizing the ongoing conflicts, says Vicky Smith, children's editor at Kirkus Reviews. "It is a real desire on the part of authors, illustrators and publishers to respond to the crisis in a way that is proactive and helpful," she says.

The wave of children's books about refugees comes amid the largest refugee crisis since World War II, as millions of civilians — many of them children — flee wars and insurgencies in Syria, Afghanistan and Iraq. Another wave of the displaced are unaccompanied children fleeing towards the southern U.S. border to escape violence in Central America. "Both of those events have triggered a rush of books dealing with refugees," Smith says. "The trend started in about 2015 and it's just been growing every year."

These new novels explore the trauma of war and violence from a child's point of view — everything from treacherous sea journeys to encounters with smugglers and overcoming Islamophobia or other forms of bigotry when starting over in a new country.

"We are hearing from our branch libraries, kids and parents are looking for these stories, " says Stephanie Anderson, assistant director of selection at the New York Public Library and Brooklyn Public Library. "I think there is a trend, and a huge readership." It's also a way to push back against a political climate that demonizes refugees and Muslims, says Laura Simeon, who's the Young Adult editor at Kirkus. "The industry is paying attention. There is a real sense that we need to resist. And this is one of the ways we can help with the resistance."

In A Land of Permanent Goodbyes, CNN journalist Atia Abawi writes about a Syrian family that escapes their ISIS-controlled town for Istanbul, and then a perilous sea journey on an overcrowded boat to Greece. Suzanne Del Rizzo's picture book, My Beautiful Birds, follows Sami, a Syrian boy who leaves behind his beloved trained pigeons when his family flees to a refugee camp in Jordan; he eventually finds comfort in caring for wild birds in the camp.

The latest popular title, Marwan's Journey, was published in May. "The text is so lyrical and so beautiful, without being heavy handed," says Deborah Sloan — she's in charge of marketing this picture book about a young boy on a perilous journey. Sloan says sales have been so strong there is already a second printing.

His novel weaves together the stories of three children: A Jewish boy whose family tried to escape Nazi Germany on a ship called the St. Louis in the 1940's; a Cuban girl who flees Havana on a raft in 1994 and Mahmoud, a Syrian boy who escapes war-torn Aleppo on a journey to Europe with his family. "Refugee was trying to put what's happening in the present day in some sort of historical context," says Gratz. "We keep making the same mistakes ... generation after generation, we keep turning people away at the doorstep who need help."

Refugee is popular with teachers and librarians as a way to explain the current crisis to children. Gratz has been invited to speak across the country — he says he visited more than 100 schools in the last school year, and he's booked for 100 more next year. "I go to some schools where they have an 85% refugee population. They're seeing it, they're living it, they're feeling it," he says.

His aim in writing the character 12-year-old Mahmoud Bishara is to show that his young Syrian protagonist is just like the American middle-schoolers who are reading his story. "He is watching Teenage Mutant Ninja Turtles on TV. He is doing math homework for school. He hopes to go to college," Gratz says. "Then bombs fell on [his family's] house, and they became refugees."

Robin Russell teaches seventh grade humanities at the Open Window School in Bellevue, Wash., and she assigns many of the refugee novels to her class. "It's not just about memorizing facts," she says. "Establishing a connection ... it makes it more personal and you can connect through your own humanity with someone else."

Her students gathered for a recent Skype interview to talk about what they learned. Rayhan Khanna says the characters in Refugee "were from different parts of the world but they were all interconnected through this way of seeking a better life." Classmate Tendo Lumala says the novels showed him that it's hard to be a refugee, because you have to make tough decisions. "It's not because you're doing something wrong, it's because of your situation and entirely not your fault." And Rachel Hines says these novels about refugees helped her understand the crisis for the first time. "I realized that the stereotype isn't true."

With so many ongoing conflicts, there are now books that illuminate the refugee experience across the world and throughout history. Linda Sue Park's A Long Walk to Water tells the story of an 11-year-old Sudanese girl in 2008 who has to walk miles each day for water, and one of the "lost boys," on a trek to a refugee camp in 1985. There are books about Hmong refugees, Nigerians and an English child sent to Canada for safety during World War II. But educator Rosetta Eun Ryong Lee says the wave of new novels is sometime considered too politically hot for the classroom.