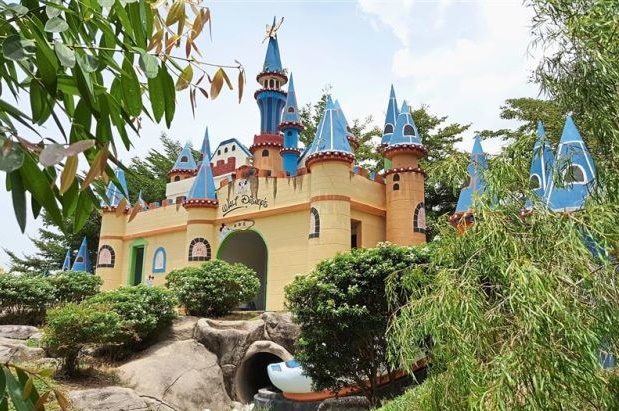 Let’s meet at Disneyland. Right here in Malaysia, in a little village in Perak! The almost 70-year-old Ayer Tawar New Village has its very own “Disneyland,” which was built on their 1.2ha field in the early 1990s. The Walt Disney theme park replica in this village, about 12km from Sitiawan and just off the Ipoh-Lumut trunk road, is certainly the pride of the villagers. This is their favourite spot to gather.

“We gather at this field during major festivals such as Chinese New Year and Mid-Autumn Festival. “The open stage, with our Disneyland as a backdrop is perfect for us to hold performances,” said the village’s Cleanliness and Beautification Association chairman Ding Kong Chong. He said the field, complete with a jogging track, is also where people exercised and children played. Ding said many residents exercised in the field every evening.

There are also “taichi” sessions there in the morning. The 50-year-old marketing officer is the third generation living in the village. His wife Siew Mei Fung, 49, is a teacher in nearby Jering New Village and the couple’s five children aged between 21 and eight years are the family’s fourth generation to live in the village. He said his grandfather first arrived in Sitiawan in the 1910s

Ding said the village, which was set up during the Emergency in 1948, was in the form of a square with its roads and houses well delineated. “Our village is very neat,” he noted with pride.

That’s not all. According to Ding, the price of land in the village has increased in the last 15 years. He said a plot of land measuring 13.7m by 27.4m, which used to be priced at RM30,000 some 15 years ago, was now worth between RM200,000 and RM300,000, depending on its location. There are about 550 houses in the village with 2,000 villagers. The population, he added, was around 7,000 including residents living in new housing estates surrounding the village.

On the trend of youngsters moving to cities and to Singapore in search of better living, Ding said it too had happened in his village. “People are more mobile nowadays. There are more job opportunities outside,” he acknowledged. His wife Siew Mei Fung, 49, is a teacher in nearby Jering New Village and the couple’s five children aged between 21 and eight years are the family’s fourth generation to live in the village. He said his grandfather first arrived in Sitiawan in the 1910s.

But Ding said the bond between the family and village among those working out of town, remained strong. He said they made an effort to organize gatherings on the second day of Chinese New Year in the village’s “Disneyland,” adding that the turnout had always been good. The first day of Chinese New Year, he noted, was always with the family. He said villagers also came together to help the underprivileged.

For example, the school, in the village, will identify students in need of help, especially when school reopens. The aid extended included bicycles, school shoes, uniforms and schoolbags. Ding said he was grateful that there were villagers and friends who were financially stable and were willing to contribute to a good cause.

Ayer Tawar New Village chief Ling Leong Chin, 58, said the lower cost of living in the village was the reason many stayed on. “We can order a pot of Chinese tea for RM3 and sit and talk in the coffeeshop for hours,” he said. Ling hopes the authorities can help provide more jobs and business opportunities to reduce the exodus among the young. He pointed out that there was land around and planting fruit trees was a viable business. He said fruits sold in Ayer Tawar were from other states including Kedah.

The migration of youths to other states had also taken a toll on Ling’s furniture manufacturing business, which he started 30 years ago. “We have a traditional bakery and confectionary producing tradtional Foochow buns, biscuits and noodles,” he said, referring to Kim Hock Kedai Roti and Siew Hua Biscuit, which have been around for seven decades. Both Ding and Ling remain confident of the village’s future despite the many challenges it faces in the new era. Most of all they are confident that their Foochow spirit—hardworking, prudent, united and enterprising—will help them to soldier on.