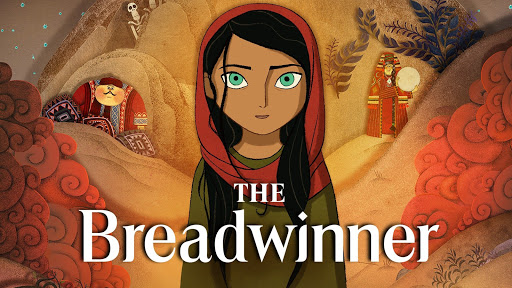 Growing up as a young Muslim girl in Malaysia, there were very little female Muslim narratives to follow or look up to. To date, the only character that had a semblance of similarity to my identity was Disney’s Mulan, and that was only because she was Chinese (which I am half of). Thankfully over the years more female writers and filmmakers have emerged and collaborated to bring out more diverse narratives for young girls to look up to, rather than  rely on the tired trope of a ‘basic damsel in distress’ or ‘blonde princess’ who plays second fiddle to the dashing prince who swoops in to save the day. Animated film The Breadwinner is one such effort.

Originally a bestselling novel by Canadian author Deborah Ellis, The Breadwinner was brought to the screen by Irish filmmaker Nora Twomey. It features a story of a young 11-year old Afghan girl called Parvana. Parvana lives in Taliban-ruled Kabul prior to 2001. After her father is wrongfully imprisoned by the Taliban, Parvana cuts her hair and dresses like a boy in order to provide for her family, a phenomenon in Afghanistan which is called bacha posh. Through her male dressing, Parvana morphs from a timid and nervous creature into a brave and confident figure whose steely determination to find and rescue her father has the audience at the edge of their seats.

Parvana’s character is supported by other female characters to showcase different ways of being female: The tenderness of Parvana’s mother Fattema, the practicality of her sister Soraya, and the hard cynicism in her fellow bacha posh friend Shauzia. The film manages to capture different layers of femininity as well as the diverse problems one faces as a female. Narratives like these are important for representation, not just for young Afghan girls, but for young girls all over the world, especially ones in marginalized nations and communities as it shows the quiet strength and perseverance that endures during a time of crisis - and what a thing of pure beauty it is!

What also stands out is the story within the film that Parvana invents and narrates to her little brother Zaki in times of crises. She tells him a tale of a young boy Suleyman who journeys to the top of a dangerous mountain to fight the elephant king who has taken all the seeds for harvest from his village. The story is presented through colourful animated visuals that are an absolute treat for the audience. The musical score that accompanies it also illustrates Parvana’s childlike imagination, and it is heart-warming to witness the vibrancy of her story coming to life against the backdrop of such tumultuous times.The Breadwinner does not feel like your typical animation. It makes the viewer uncomfortable, and causes many moments of distress. But in that discomfort lies the brilliance of the film. Parvana’s story is a narrative that belongs to many girls living in Afghanistan, a country that the UN states to be the worst place to be born a female.

While the narrative is so localized, the idea of a suppressed female is not one that is unfamiliar to the rest of the world, particularly in Third World countries, where girls are considered liabilities and not as blessings in their family. In a world where females are still considered to be less superior to men and in some cases treated as common property, the determination that lies within the characters of Parvana and even her friend Shauzia to make a better life for themselves and provide for their family independently is a strength that young women and girls can draw from.

It is important to note also how The Breadwinner and Parvana also contribute to the growing pool of representation of female that belong to different nationalities and ethnicities, joining the ranks of characters like Disney’s Moana and Doc McStuffins. This, of course, creates visibility for different ethnic groups.

It has been a long time coming that females are better represented in animation, and narratives like The Breadwinner bring to the screen a realism seldom seen in Hollywood films. Whilst backed by famed actress and producer Angelina Jolie, a product of Hollywood herself, the authenticity of the culture and story isn’t taken away from the narrative. This makes The Breadwinner such a compelling film for young girls who never see themselves represented within Western films. I now hold great hope for my daughters and young girls like them, who will no longer grow up unrepresented in mainstream media. They now have good stories enriched with values of family and independence available for their viewing pleasure. This movie is a step in the right direction in curbing female oppression and building up strong, courageous young women.

The Breadwinner will premiere in Malaysian theaters on September 27.