For most of my life, Islam felt like conditional love: I had no right to call myself a Muslim (nor would others call me one) because I hardly prayed, am not too concerned about halal food, constantly challenged longstanding interpretations of the religion and questioned the existence and validity of certain beliefs and rituals.

Raised in a pious, religious household, I grew up following the rituals to a tee. I spent my youth following a creed that I thought was essential to my self-worth, humanity and spirit; but I never felt good enough to be considered a Muslim. Furthermore, society also always seemed to reinforce this feeling of inadequacy, where our prayers are never proper enough for God, where we will never pray enough, nor will we ever be as humble as the prophets.

As I grew older, a sense of uneasiness and conflict grew. I constantly felt punished for doing things I enjoyed that were not harmful or hurtful to me or anyone. I felt as if religious people never seemed to care about women or they “care” too much by wanting to control and have power over us. It slowly got increasingly harder to commit to praying every day. It was not only the tediousness of the rituals but also the contradictions I felt about what I knew the religion to be, and the values I held.

I slowly began to distance myself from the faith. It began as me believing that I will go back and regain my old life as a dedicated Muslim someday. However, I soon realized that I was not someone who was invested in the rituals any longer albeit, I still stayed steadfast to my faith.

I took a more rational approach to my spirituality and faith. I no longer associated any of my mishaps or misfortunes to my lack of rituals. I was no longer ruled by the fear of balak tuhan (God’s punishment). I was finally making decisions and being accountable to my own self. It was liberating! I was free to enjoy a glass of wine with my friends, without the guilt. I was free to go out in clothes that I thought made me look good, without the guilt. I was free to live my authentic life, without any guilt. Although I did not practice all the traditional rituals, I still identified as a Muslim. I fasted every Ramadhan, went for terawih prayers without fail and did my prayers when I felt like it. I balanced the life of sin with some of the rituals I was taught and expected to perform.

Not Muslim enough for him

That was until I met Adil. He seemed progressive, his circle of friends equally so. However, as our relationship progressed, he obsessed about my lack of ritualistic practice. He was convinced my lack of wont to pray made me a ‘deviant’ Muslim and ultimately an immoral person.

Not only he, but also his friends, and family slowly coerced me to work on my “religiosity”. It began with the constant shame couched through encouraging tones of advice, and the passive-aggressive remarks when I did not publicly announce I was going to pray. My choices often drew eye rolls, sighs of disappointment and the condescending line “what is 5 minutes of your time”.

Yes, 5 minutes of my day is nothing. However, the imposition of the task, the patronizing tone, the coercion framed as advice – that is not just “nothing”. These are acts that chip away and slowly disempowers a person’s spirit. I was made to believe that I was not a good Muslim, good friend, good girlfriend and a good person. And I believed it.

Not Muslim enough for the pulpit

Eventually, I succumbed. The burden of having to accept their judgment with a smile (pretending that I appreciated their dakwah) was too much to shoulder, so I did my prayers (to pray that the control would stop).

Whenever we went out, I was careful to dress “appropriately”, because we would often pray together at the mosque. Mosques in Singapore have never felt safe to me; I constantly worried that I would get chided, scolded and humiliated because I was not dressed ‘modestly’. People at the mosque have chided me publicly for wearing torn jeans, a dress, or for the wind blowing through my hair. Once, at Masjid Sultan, thinking my long sleeves and jeans were modest enough, I decided to enter the house of God. Instead, I was stopped and publicly humiliated by their entrance guard. I was told to cover up before entering because my knees were showing through the fashionably and well-placed tears on my jeans… The accumulation of stressful experiences has resulted in me staying away from the house of God.

Not Muslim enough for the community 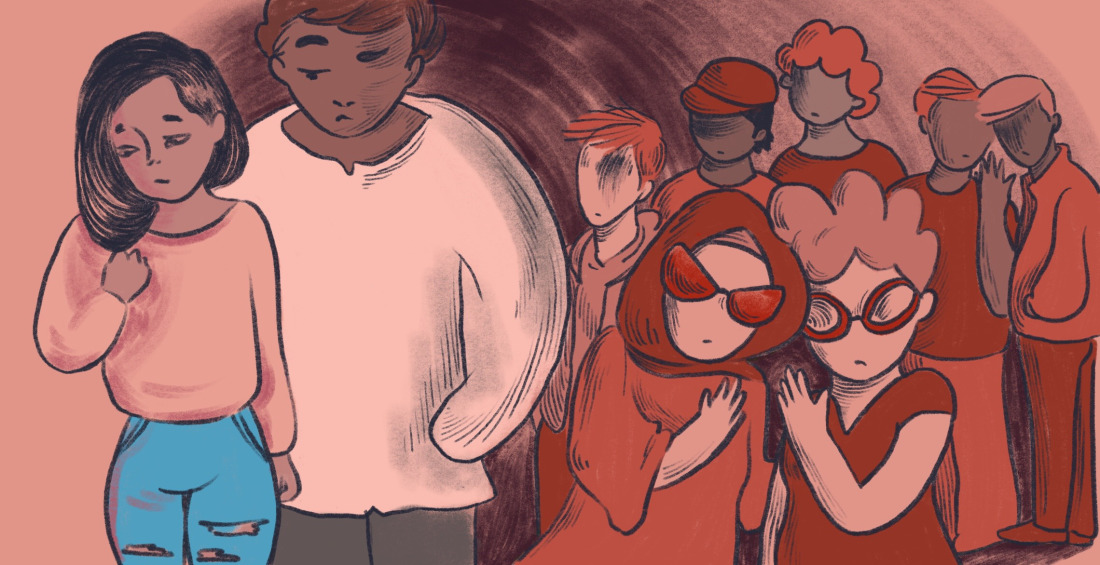 To placate Adil and also to prove to him and his peers that I was taking steps to ‘improve myself as a Muslim’, I decided to sign up for a religious class. It was a weekly nightmare. The ustaz would insinuate or point out that I was not wearing the hijab every other week. If not me, he would talk about how women who wore the turbans or any fashionable style of hijab were wrong. He would make intensely misogynistic and controversial remarks and no one would bat an eyelid. The older women in the class would accuse me of wanting to attract men’s attention for what I wore. It was always an accusation that I made these men commit sins, without personal accountability demanded from these perverts. I eventually left the class for the sake of my mental health.

Some of Adil’s peers were not helpful in calling him out for his spiritual abuse nor did they recognize how mentally, emotionally and psychologically toxic he was. They repeatedly convinced him that I was “not good enough” for him or kept silent throughout my ordeal. These claims were based on the facts that I was not a ritualistic Muslim. Their assumptions on my character were not based on my values, ethics, or beliefs, rather on what I did or did not do as a “Muslim”. No one saw the imposition of religiosity as spiritual abuse, because to them, being ritualistic was a positive thing that will bring me to heaven – even though they made my life a living hell.

It was an isolating, dehumanizing experience because the community I called myself a part of did not want me. Self-identifying as Muslim, acting on all the Islamic values and virtues (like kindness, compassion, challenging injustices) was not enough. I had to behave in accordance to their perception of a Muslim, which meant following all the suffocating rules. It felt like Islam had no place for me. But I trudged on and tried to work towards being a ‘good’ Muslim.

Things became clearer when I found out Adil was cheating on me with someone who prayed five times a day, never questioned the rituals and religion, and was also cheating on her partner of 8 years. Ha, the hypocrisy of these outwardly religious people! I was shattered not because I was betrayed by the person I thought I loved, but that I had sacrificed a large part of myself to be seen as a ‘good Muslim’ and lost a large part of who I was in the process.

In order to heal, I decided to leave my community and fly halfway across the world. I suspended my beliefs, slowly unlearnt the doctrine and dogmatic structures of what I thought was my religion, and left the faith and community behind. I did not want to be associated with a community that pretends to love me but beats me into submission to conform.

It was when I was in Toronto that I decided to pray at an open mosque, El-Tawhid Juma Circle. As much as the self-righteous religious Muslims had betrayed, disowned, and consistently reminded me that I was not one of them, I still needed to heal spiritually. I wanted to reconcile the steadfast spiritual abuse I had endured and not hate my faith. I did not feel it was healthy to hate something that I saw was an integral part of my identity.

The mosque I chose to pray in prides itself as a gender equal, LGBTQ affirming place of healing and learning. It was in this space where I saw people prioritize interpretations of faith over acts of faith. I felt safe – spiritually and physically. I also found others who were escaping the same spiritual brutalities and coercion that I had gone through. And it dawned on me that I have finally found the types of Muslims I want to be with. They were inclusive, compassionate, did not enforce their understanding of Islam onto others and did not care if I was “Muslim enough” or not.