Muslim women sit behind curtain for awareness class on vaccination 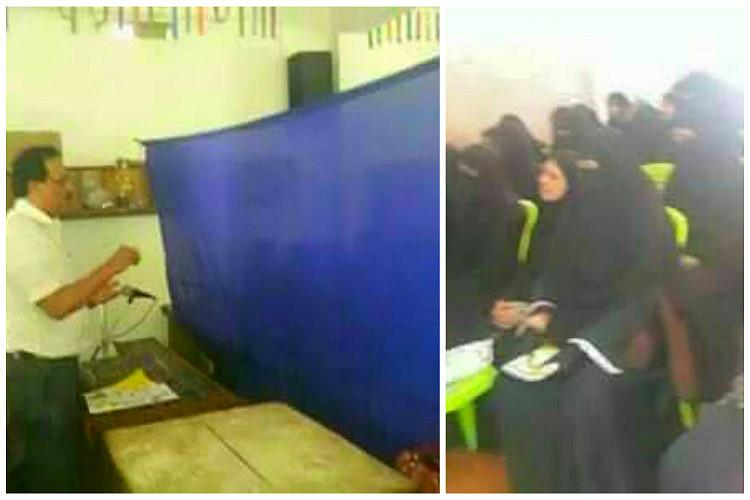 A few photographs of a doctor speaking to a group of Muslim women in purdah have been doing the rounds in social media for the past couple of days. What has made the photographs go viral is that they show a curtain separating the speaker and his audience.

And this happened not in a Shariat- abiding Arab country in the Gulf, but in our very own Kasaragod district in Kerala. Dr Jamal Ahmed –Medical Superintendent of the Nileswaram Taluk Hospital- was the one who had to deliver a class at a religious centre in Nileswaram on the need for vaccines.

It was attended by around 100-odd Muslim women who sat screened from the speaker by a curtain.

“This was at a centre in Nileswaram where Quran classes are conducted on Tuesdays for women. Last Tuesday, I went there to take a class on vaccination.  A curtain was put in front of me to prevent me from seeing them. I did ask whether it could be removed, but authorities did not seem very comfortable with the suggestion,” he told TNM.

“Since my aim was to spread awareness and not create a controversy, I took the class, even though it was kind of awkward,” says Dr.Jamal, while speaking to The News Minute.

“They usually do this for the Quran classes, so that the Ustaad would not be able to see the women,” he adds.

The Muslim community’s aversion to immunization and vaccines had resulted in a rise in cases of diphtheria in Malappuram, with many of its religious leaders spreading the idea that immunization was against Islam.

“We have been conducting awareness classes in Muslim-concentrated areas like Malappuram and Kasaragod. We try and make them understand that vaccines are a necessity,” remarks Jamal.

Activists and liberalists are actually quite surprised to find the prevalence of such conservative practices in a state like Kerala.

"There are people in the Muslim community who are liberal, there are also those who are orthodox. Many things have changed with time. Islam never says women should hide themselves and listen to a class. So such people need more awareness, and once they have it, such things will not happen. It is all about the mentality of the people, we can't thrash and correct them. Mentality should change. It is common to have orthodox people in areas like Kasaragod. But even here, we can find extremely liberal Muslim girls. With time all these practices will change," Indian Union Muslim League's (IUML) Vanitha League state president Kamarunnisa Anwar said.

“Born and brought up in a Muslim family, I can say for sure that such practices were not followed here in the past. Muslim women used to work in fields and farms here. They were liberal. I can’t believe this happened,” says Sulfath M -a women activist and school teacher from Kannur.

According to her, all communities have become more conservative due to an identity crisis faced in today’s society. She also feels that large-scale migration of Muslim men to foreign countries too has contributed to the rise of such stringent rules.

“When Muslim men go abroad, religious institutions take over the reign of women left back home. Women are left defenseless in such a situation. That’s when new practices like these crop up.

Now even small kids wear purdah while going to the Madrassa, a practice that began just a few years ago. Even the culture of purdah too invaded our land only recently,” opines Sulfath.