By Laksmi Pamuntjak for Scroll.in

An excerpt from ‘Amba’, whose triangular love story is also the saga of an entire country.

Yet girls, even strong and wilful ones, will be girls. In time, Amba learned to look forward to Salwa’s letters. She enjoyed his stories about life on campus, about the independence he’d gained so early through sheer will to convert every new dawn into his own currency. She enjoyed the patient and unselfish commitment he’d shown her, one that allowed her room to grow.

“We shall wait, if that’s what you wish. We shall wait until you’ve finished your studies. It is not love that demands,” he wrote to her when they had already known each other for six months, and she again expressed her discomfort with the idea of marrying too early. Most of all, she enjoyed the fact that he knew how to write.

Of course, she did not know any other love apart from what she had read in the old books. Salwa’s seemed very noble. And very reassuring. The old books spoke of love that flared and burned and scorched, love that drew furrows in the earth and moved the heavens. They spoke of life being better than death, even if in life there was suffering, for in death there was no love.

But why did he wait so completely?

Why not at least let her have a taste of things to come? Isn’t desire something that does not wait for consensus?

Yet they had not so much as pecked, reverently, on the cheek, like chaste hens, after a night at the cinema. When he spoke of love it was as though he’d transcended it, as though he’d arrived at a higher place.

Not that this desire she had been thinking about so much had caught up with her fully either. She still couldn’t fathom this “fire in the loins” that books such as The Book of Centhini suggested could cause regular folks to leap like horses and make out with anything that moved.

But this was okay. Something about not knowing also steadied and pleased her, for she couldn’t imagine herself naked in front of Salwa.

By the time another six months had passed the year was 1963, and Amba was nineteen and a student in the English Literature Department at Gadjah Mada University. She had won. Her twin sisters had decided they would both love her and hate her, and her parents added five minutes of extra prayers for her every night. They spoke at the dining table as though she was still there with them, occupying her chair facing the window. 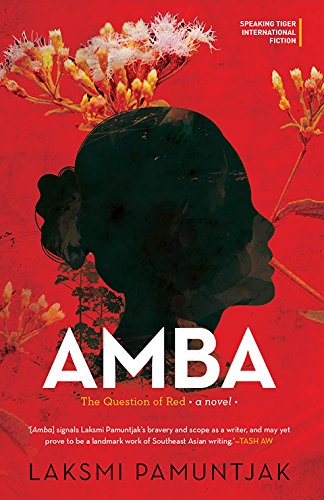 How is it that some people are happy and others are not?

How can you make your life meaningful when you know you are unhappy? Or does meaning come with unhappiness? Is it unhappiness or is it just a feeling of emptiness? When does a feeling of emptiness become suffering? What does it mean to be able to create great works because you are suffering? Amba hoped her study of literature would produce answers to these questions.

But that implied a process, whereas life was, well, life was now. And it was not yet the powerful, plashing paradox she was waiting to thrive on.

The trouble was, she realised, she was not unhappy. Living with her elderly aunt and uncle, an idea that had scared Amba at first, turned out to be liberating. The house they lived in, on Menukan 28, was modest but spacious, in a surprisingly neat urban neighborhood called Brontosuman, not far from the main street.

There were hardly any rules, other than she should not smoke and not come home too late. They hardly ever asked questions. Not about her studies, not about her comings and goings, not about her politics, not even about Salwa. Maybe it was because Salwa inspired such faith in older people.

So Amba and Salwa went out together every two weeks, mostly on a weekend. On Saturdays this usually involved a movie in Soboharsono followed by roadside noodles, their favorite mie thok-thok. Sometimes they would eat fried noodles and fish cakes at a restaurant owned by a Chinese lady called Mrs Liem, near the Tugu station. They would sit at the table farthest away from the cashier and bask in the subversiveness of it all. On Sundays Salwa would take her to the Beringharjo market to eat blanched vegetables in peanut sauce and snack on traditional cakes.

Sometimes they would pay a visit to Toko Djoen, a bakery owned by an old Chinese couple, and buy bread and cookies for Amba’s uncle and aunt. Nyah Djoen, the wife, loved talking to Salwa. Even though she looked almost a hundred years old, she opened up to him in the way Amba’s mother did, with a flushed, late-blooming carnality that fascinated Amba, as it was a state still unknown to her. The old woman would share her list of aches and pains as though going over the bus timetable.

When Salwa tried to suggest a remedy, she would shake her head furiously, and say, “Ah, what do you people, the young and beautiful, know of pain? I know what ails me. I know it’s not curable. But do you see me stop working? Do you see me complaining?”

The same old woman told them that she came to the big city with her husband and two children in 1959. “We were victims of that stupid government decree. The one that forced the Chinese petty traders out of the rural areas. We liked the countryside much more than we like it here,” she said, her quick old eyes darting briefly to the family photos on the wall.

“People there also liked our cakes better than people here, where everyone is spoiled by all the choices. This is what ruins their palates, for god’s sake. But my husband doesn’t like me talking like this. He always tells me even with a crystal ball and a magic wand we still can’t make the world bend to our will. These days only rifles and batons rule the world. Our fate could have been worse. We could have been forced onto trucks like cattle or shot like pigs, like our brothers and sisters in Cimahi.”

So this was why Mr Djoen and his wife became Communists,

Amba thought. She knew the Communist Party had been famously opposed to the government’s relocating of the Chinese into big cities, and she knew those drowning will grab at any lifeboat. She wanted to say something sympathetic, but Salwa was already leaving the subject.

She had noticed how often he was uneasy with conversation about politics. If he talked about it at all he saw it as some kind of a task, not a birthright. To Salwa politics was a system of information, like folklore, like botany, something he had to know a little bit about in order to get by. But he surprised her when he placed his hand on the old lady’s arm as though by that single gesture he could take all her pain away. He surprised her again later that day when, while taking her home, he said, astoundingly, “So they’re Chinese. But does it mean they’re wrong?”

That night she found herself tossing and turning in her bed, unable to sleep.

She realised it wasn’t what Salwa said that had jarred her, or the fact that he had said it with a furrowed brow. Rather, it was his curious lack of anger.

Whereas with her, there was little else to do but press ahead with her life, and she did so precisely because of this odd bit of contentment within her, one that allowed her to still be surprised by joy. Joy in the smallest things. Things that included meeting Salwa every two weeks, sometimes more often, and witnessing the way he touched the hearts of strangers without even trying.

In matters of the heart, however, not a lot actually happened between him and her. Soon she even resigned herself to missing him, sometimes. Eventually she realised that she had gotten what she’d always wished for: that wicked paradox of wanting to see the beloved yet not minding if he wasn’t there, of being irritated by his flaws yet trying at the same to justify them as some kind of underrated virtue.

She was, in short, living the lover’s dilemmas.

Excerpted with permission from Amba: The Question of Red, Laksmi Pamuntjak, Speaking Tiger.