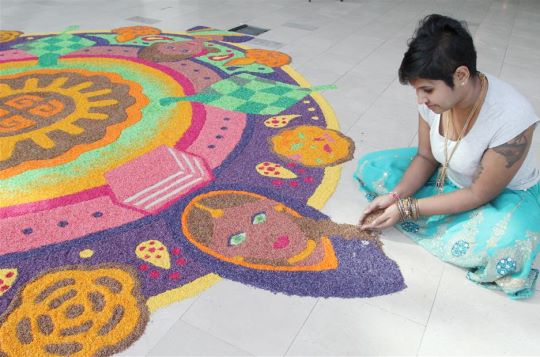 In some parts of the world, most notably in Indian states such as Tamil Nadu as well as in countries such as Malaysia, Indonesia and Sri Lanka, it is common to witness the breathtaking art of kolams around the time of festivities such as Diwali.

Kolams are drawings which usually consist of geometrical lines and curved loops, drawn around a grid pattern of dots. They are made using rice flour, chalk powder and synthetically-colored powders.

Kolams come in many designs and have various spiritual significance. For example, the Nalvaravu signifies that a home is welcoming to its visitors. Thottil Kolams (also known as cradle kolams) are designed for the naming ceremony of newborns, while snake kolams are thought to protect homes from thieves and evil spirits.

Malaysian Ruby Subramaniam, 29, has been dedicating herself to the art of making kolams for seven years now.

You may have heard of her before: Ruby is a multi-talented artist who dabbles in various art forms, and is known for works such as ‘ANTIDOTE: Uncovering Skin & Soul’. ANTIDOTE is a social impact documentary that explores women’s relationship with their bodies. The project presents 30 intimate stories by 30 diverse women that was translated to body art in 30 days. Her works have been featured in news outlets such as BuzzFeed and Mashable.

Making kolams is a spiritual and emotional act for Ruby.

"Creating a Kolam is a meditative process. It is an art form that requires you to be mindful,” she says.

Her relationship to the art of kolam runs deep.

“My first kolam was for the prayers during the first anniversary of my late mother’s passing. I was practicing my Hindu culture and tradition stronger after she passed and so it was a form of holding on to her,” she said.

“It was a bit strange though, because she was never that religious nor had we ever done a kolam together.  It was my way of honoring my mother I guess,” Ruby added.

Kolams have always been done by women since they are usually the ones who run households.

Indeed, Ruby identifies with the feminist element of making kolams: “For a long time I struggled with my identity being a Malaysian Indian woman. I never quite belonged to the Indian community, especially my family because I wasn't "traditional" enough, and I was "too Indian" for the rest of the urban society. Now with short hair and tattoos on my sleeve, I look like the woman your mother would warn not to grow up looking like,” she says.

“Doing the kolam is my way of holding on to my roots, without being committed to other societal cultural expectations. Maturing as an artist and as a woman, I'm now quite proud I get to interpret such a traditional practice according to my perspective and understanding, in a society that is quite conservative about keeping things "pure". The irony is  not looking homely, but I'm able to uphold the culture according to my terms. It's very liberating.  Also, I'm able to share the practice to non-Hindus as well,” she added.

Ruby walks me through the steps of making a kolam: First, she decides how much rice she needs - usually uses 1.5 kilograms per 1 square feet. She then decides the colors to be used beforehand. She usually mixes two colors together to get different color tones. She then plays with the opacity of the colors by controlling how much food coloring and water should mix.

“The proportion of water is important, too much might ruin it, but too little may be real difficult to color the rice equally,” Ruby says. She then gets her hands dirty and proceeds to mix the colors.

She then packs them according to the different shades, and drawing with a chalk on the surface, makes the kolam. By cupping her hands together, she plots the different colors in, starting from the center, and works around it.

It is an intricate art indeed: “Instead of using a brush, I get a chance to sculpt the colored rice with my hands to form an image on the floor. I can go on forever trying to shape the material to perfection, unlike a brush stroke that I get a single chance to mark on paper.

But here lies the danger: “Its advantage is also its biggest challenge - a little clumsiness may result in destroying the fragile work in a single step,” she says.

Ruby likes to challenge the stereotypical design of kolams. Traditional kolams usually feature flowers and peacocks. Ruby’s versions of kolams are usually different: If commissioned by a client, she tries to infuse the client’s brand identity into the kolam and make it relevant to the company’s target audience. Meanwhile, Ruby experiments with more contemporary designs if she is making a kolam for a friend.

Her works have been featured in places such as the upscale mall Publika in Kuala Lumpur (the theme: Malaysian food) as well at four RapidKL train stations around the city. At the latter, she featured a classical Indian dancer, with cityscapes and train tracks as the background.

However, Ruby fears that kolams are losing their artistic and spiritual values with their increasing commercialism.

“Walk around Little India and you'll find plastic sticker kolams ready-made for you to stick it onto the floor. The kolam is a simple practice that can be done as a family practice, yet we take the laziest way out and it defeats the entire purpose says,” she sighs.

Furthermore, in malls, kolams are made on a grand scale, only to be discarded after celebrations are over, which contributes to wastage.

“Like any other religious practice, people seem to be holding on to the visual element and magnifying it, but forgetting the real underlying reason to the practice. Shopping malls feature kolam during Diwali year after year – is it because there's nothing else cultural about the Hindu religion? Or is it laziness to find more ways to explore this festive decor? Is that then the fault of commercial malls, or off the artists that are too comfortable in their space?” she asks.

Ruby admits that she too used to fall into the trap of commercialism.

“Unfortunately, I too fall for this, as this is the only time Indian artists are actively sought for. But I have been trying to use this format, almost like a public performative art to bring out different messages, rather than it just being a decorative element,” she says.

This is why Ruby is excited to collaborate with education centre Me.reka Makerspace this year to make sustainable versions of kolam using discarded materials.  She will also hold workshops to explain the cultural significance of kolams and how they can be practiced.

“With the workshops, I get to talk and discuss more about my sentiments around wastage and making the visual more contemporary,” she says.

Before I end the interview, I ask Ruby how kolams should evolve. She says: “Understandably, with women playing more active role to contribute to the household financially, there is a bigger burden for them to also carry the cultural practice. But perhaps it’s time men pick up the practice too.”

For more information on Ruby Subramaniam’s works, check out her website.