By Selin Girit for BBC News 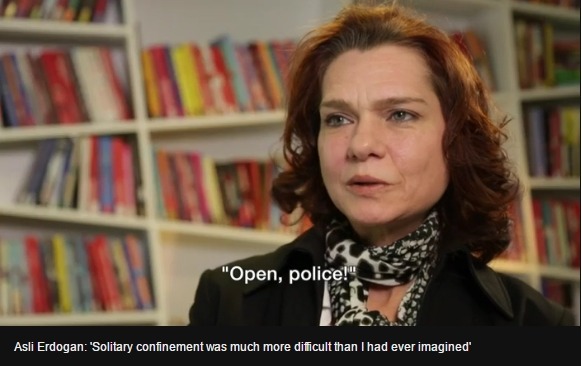 Detained in August last year, she is one of many Turkish intellectuals facing criminal charges since the failed coup in July 2016.

She was still in bed when the special forces team came banging on her door, she tells me.

"They were dressed as if they were going to war. Bulletproof vests, automatic weapons. It was summer and I was in shorts," she says.

"I begged them to give me a minute to get changed. They didn't. One of them pointed his weapon to my chest and said 'Don't move!' I was shaking. Altogether perhaps 25-30 policemen came in. The building was surrounded by snipers too. It was a big operation."

Ms Erdogan spent over four months in pre-trial detention, charged with one of Turkey's most serious offences: disrupting the unity and integrity of the state. She is also accused of terror propaganda and being a member of the Kurdish militant group, the PKK.

She was on the advisory board of pro-Kurdish newspaper Ozgur Gundem, a paper that focuses on the Kurdish conflict and faced dozens of investigations on suspicion of supporting the PKK.

Linguist Necmiye Alpay, 70, was arrested with her. Their case prompted international concern over the state of freedom of speech in Turkey. Both were released pending trial in December.

Who is Asli Erdogan?

"From the moment I was taken to the police station, it was like a joke," Ms Erdogan says.

"Even the prosecutor knew that I was not the founder of the PKK, still I found myself in jail. But what was my crime actually? Being an adviser to a newspaper?

"The absurdity reaches so high a level that we have to use the term Kafkaesque or reinvent another term to define today's Turkey," she adds.

In the crackdown following last year's coup attempt, some 40,000 people have been jailed. Many others have been imprisoned for allegedly having links to the PKK.

Turkey is currently the world's biggest jailer of journalists - with some 150 behind bars. Over 140 newspapers, magazines and television channels have also been banned since a state of emergency was declared after the failed coup.

Asli Erdogan spent three days in custody with four women in a cell of 8 sq m (86 sq ft) with no facilities. Then she was moved to solitary confinement.

"There was a period when they didn't give me any drinking water. Solitary confinement was much more difficult than I had ever imagined," she says. "After three days you become unable to walk long distances, to speak. It crushes you very fast. I think it's the worst torture one can go through."

Eventually she was moved to a prison ward, where she contemplated suicide but resolved not to give in. No flowers, plants or trees were allowed but it was a rule she and her fellow inmates were determined to fight.

"To grow a plant, first you have to make soil. You make the soil out of tea leaves and egg shells. It takes weeks to dry a bit of soil, and then to plant.

"The ugly basil we managed to grow was like the prince of the ward. But then the guards found it and it was taken away from us. It was a tragic scene to see women shedding tears to protect one single plant. So I told my fellow inmates before I was released of how spoilt I had been to talk of suicide while they were desperately trying to defend life."

Released, but not free

Asli Erdogan's next hearing is scheduled for 14 March. If convicted she could still face life imprisonment. She already censors herself because she believes any misplaced words could mean a return to jail.

"I have been released, but I do not feel free. In the current political climate in Turkey, one would need to be very naive to feel free," she argues.

Turkey will go to polls this spring for a referendum on whether to change the constitution to give President Recep Tayyip Erdogan further executive powers. The government says a "yes" vote could bring an end to the terror attacks that have killed over 500 people in terror attacks in the past 18 months.

But Asli Erdogan says many Turks have become indifferent to their fate.