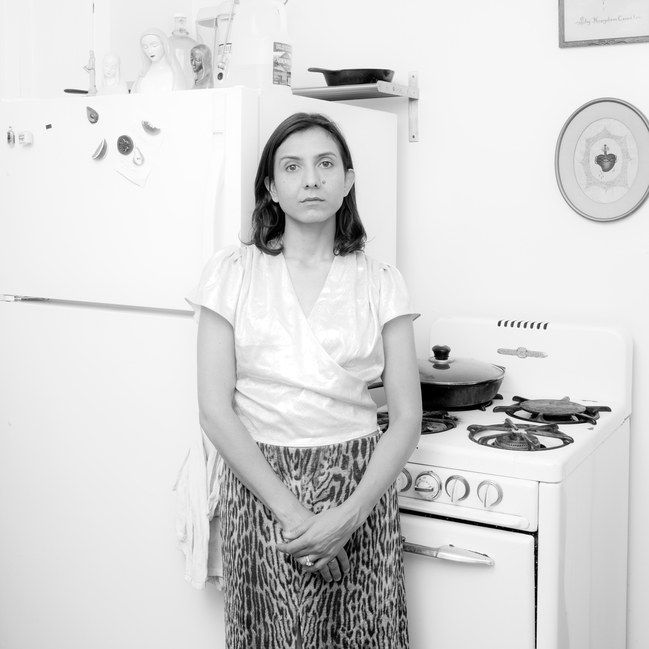 is easily the most interesting contemporary American writer on the subject of being alive when being alive feels terrible. She has a freaky and pure way of accessing existential alienation, as if her mind were tapped directly into the sap of some gnarled, secret tree. Her characters develop methods of simultaneously savoring and blunting their predicaments: the title character of “Eileen,” Moshfegh’s 2015 novel, swaddles her genitalia in thick undergarments and then compulsively scrabbles at what’s hidden; she gobbles laxatives and submits to great, “oceanic” shits. The drunken sailor McGlue, the protagonist of Moshfegh’s 2014 novella of the same name, cocoons himself in his addiction and repeatedly bashes his skull against the wall. Sometimes Moshfegh’s characters fixate on solutions—ones that are designed to match the absurdity of their fishbowl existence but are also delivered seriously, as if they will work. In “A Better Place,” a story in her 2017 collection, “Homesick for Another World,” the child narrator believes that she and her twin brother were sent to Earth from a different universe. The only way to return to the better place is for each of them to kill the right person. If they kill the wrong person, the plan, obviously, will fail.

In Moshfegh’s new novel, “My Year of Rest and Relaxation,” the unnamed narrator—a young, tall, thin, blond, beautiful woman whose physical appearance functions as a near-comic disguise for her laziness, uselessness, and misanthropy—can hardly stand to be conscious. Her solution is to put herself into chemical hibernation for a year. “Neuroproxin, Maxiphenphen, Valdignore, Silencior, Seconol, Nembutal, Valium, Librium, Placydil, Noctec, Miltown,” she recites, running down her arsenal. (A few of these drugs are invented, as is Infermiterol, a substance that induces three-day blackouts, during which the narrator’s personality blossoms and fades.) She comes up with her unconventional wellness plan in the fog of detachment that follows the death of her parents, which seems not much different from the fog of detachment that preceded it. “None of us had much warmth in our hearts,” she thinks, remembering her dad, a snide and distant professor, and her mom, a vain alcoholic who said, after announcing that her father had cancer, “Well, Goddamnit, if you insist on getting weepy . . . You know, when you were a baby, I crushed Valium into your bottle? You had colic and cried for hours and hours, inconsolable and for no good reason. And change your shirt. I can see the sweat under your arms. I’m going to bed.”

As an adult, the narrator—relatably enough—is passionate only about sleeping. She is incapable of carrying on conversations, even with her best friend, Reva. (“You’re needy. Sounds frustrating,” she says). But she savors the nuances of unconsciousness, mixing pills in sequence like a d.j. summoning a beat. “Three lithium, two Ativan, five Ambien” is a “nice melange, a luxurious free fall into velvet blackness,” especially with some trazodone on top, “so if I dreamt, I’d dream low to the ground . . . and maybe one more Ativan,” to add a “cool breeze, slightly effervescent . . . My mouth watered. Good strong American sleep.” She believes that if she can stay in this pharmaceutical chrysalis for long enough, she will emerge transformed—a person who lives in the world instead of constantly fantasizing about removing herself from it. Her aide in this mission is Dr. Tuttle, a Yellow Pages quack extraordinaire whose medical advice runs the gamut from “dial 9-1-1 if anything bad happens” to “use reason when you feel you can.” Tuttle enters the picture while wearing a neck brace and holding a cat that she calls “my eldest.” She tells the narrator, “People would be so much more at ease if they acted on impulse rather than reason. That’s why drugs are so effective in curing mental illness—because they impair our judgment. Don’t try to think too much.”

Watching Moshfegh turn her withering attention to the gleaming absurdities of pre-9/11 New York City, an environment where everyone except the narrator seems beset with delusional optimism, horrifically carefree, feels like eating bright, slick candy—candy that might also poison you. Reva is a perfect grotesque of the best-friend stock character—outfitted in wrinkled business-casual, obsessed with manicures and happy hour, perpetually excited about terrible weekend plans. Her third-floor walkup smells like “sweaty gym clothes and French fries and Lysol and Tommy Girl perfume.” Reva does crunches on the narrator’s living-room floor in a J. Crew shift dress, beneath a mirror with a Polaroid of herself tucked in the frame. “Reva thought it was a loving gesture,” the narrator observes dispassionately, “but the photo was really meant as a reminder of how little I enjoyed her company if I felt like calling her later while I was under the influence.”

The narrator retains Reva’s loyalty because she’s thin and pretty and “cultured,” which the narrator concludes to mean that she majored in art history and has money she didn’t earn. For a while, the narrator works for a Chelsea gallerist whose star artist is Ping Xi, a twenty-three-year-old who stuffs pigment pellets into the tip of his penis and then masturbates onto large canvases. (The paintings are called “Wintertime in Ho Chi Minh City” and “Bombs Away, Nairobi.” “It was all nonsense, but people loved it.”) For another show, Ping Xi performs taxidermy on expensive purebred dogs; the rumor is that he locks them in an industrial freezer, to kill them without “compromising the look of the animal. When they thaw, he can get them into whatever position he wants.” It is, fittingly, Ping Xi whom the narrator enlists for the final phase of her hibernation, in which she plots to spend only forty hours awake over the course of four months. This is a life-or-death performance-art project: “The deep sleep I would soon enter required a completely blank canvas if I was to emerge from it renewed.”