By Ayla Jean Yackley for Reuters 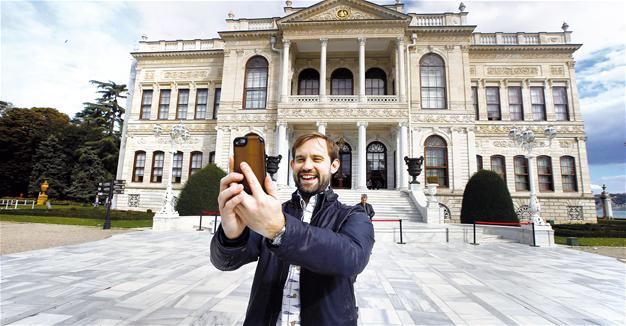 It's not every day Turkish comedy fans get to laugh at a descendant of the sultan.

"I've got this fancy title but don't have the riches," said Naz Osmanoglu, a British comedian and member of Turkey's former ruling family, at his first-ever gig in Turkey last week.

"My granddad was born in Dolmabahce (Palace) in a golden crib. Now I'm paying 30 lira to see it," he told the audience in a middle-class English accent at the first of three stand-up performances in Istanbul.

Not much about Osmanoglu, whose full name is His Imperial Highness Prince Nazim Ziyaeddin Nazim Osmanoglu, hints at his royal pedigree as 17th in line to the Ottoman throne.

It is a ceremonial title: The caliphate was abolished within months of the formation of the Turkish Republic in 1923.

But Osmanoglu's visit - his first time on Turkish soil - coincides with a growing fascination about an imperial past increasingly evoked by President Tayyip Erdogan in his speeches.

"It feels like a real embrace. I definitely recognize a resurgence of interest," Osmanoglu says in an interview while touring Dolmabahce, the neo-Baroque 19th Century palace that served as the final seat of Ottoman power. Today it's a museum.

Dressed in a leather jacket and jeans, Osmanoglu makes a crack about "walking around like I own the place" after snapping a selfie beneath the family seal atop 10-meter white gates.

The Ottoman Empire collapsed after joining the losing side in World War One under Osmanoglu's great-great-grandfather, Mehmet V, the world's penultimate caliph. A secular republic was founded by Mustafa Kemal Ataturk on its ashes.

About 150 members of the family were banished from Istanbul in 1924, and their fall from grace from a house that once reigned from the Persian Gulf to the gates of Vienna was stunning. Exile impoverished them, and their members today are spread across Europe, the United States and the Middle East.

One branch of the family reportedly sued in 2014 to reclaim billions of dollars in assets seized by the state in the 1920s.

Osmanoglu, who grew up in Jordan and Dubai before attending boarding school in Britain and doesn't speak much Turkish, says the first visit was hard for his father, a retired pilot who was barred for half his life and still feels "a sense of loss" over the dynasty's dissolution.

Now, both men are set to receive Turkish citizenship.

"I'm proud of my family's rich history but I'm a regular guy doing my thing," said the London-based comedian, a rising star who performed in August at the Edinburgh Festival and finished the critically acclaimed BBC sitcom "Flat TV" last year.

His lineage is rich ground for material.

"All I need to do is kill 16 other guys to become sultan of Turkey," he said at the Istanbul show, to roars of laughter.