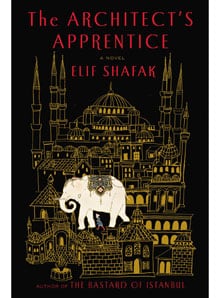 Elif Shafak has emerged as one of Turkey’s most influential contemporary writers, with an array of fiction and nonfiction that straddles the Bosporus, one foot in Europe, one in Asia, while attuned to broad currents of transnational culture. In 2006, “The Bastard of Istanbul” ignited fierce controversy and legal action over her allegedly “anti-Turkish” depiction of the Armenian genocide and its consequences. Blending historical fiction, magical realism and a lyrical sense of place, her recent work confounds neat distinctions of genre and has established her as a leading voice in global anglophone literature.

If a writer of such diverse accomplishment can have a breakout, “The Architect’s Apprentice” may well be it. With this new novel, Shafak has given us a work of historical fiction deeply rooted in a particular moment while transcending the time and place of its setting to reimagine a transformative era in all its complexity. The story’s (fictional) protagonist, Jahan, is apprenticed to the great (and historical) Mimar Sinan, a prolific 16th-century architect and builder under Suleiman the Magnificent and two of his successors. Among Sinan’s achievements was the Suleymaniye Mosque, the largest mosque in Istanbul and a soaring triumph of design.

The novel begins and ends in the first-person retrospective voice of Jahan, writing from Agra, India, in 1632, though the bulk of the story takes place over the many years between the beginning of Jahan’s apprenticeship and the death of his master. “There were six of us: the master, the apprentices and the white elephant,” Jahan tells us. “We built everything together. Mosques, bridges, madrasas, caravanserais, alms houses, aqueducts.”

As in Sinan’s own creations, certain elements of this story hold together better than others. The novel is densely episodic, and Jahan’s unrequited love for a sultan’s daughter isn’t allowed to develop beyond adolescent infatuation. Yet there is great beauty in Shafak’s evocations of the era, and the novel can be read as a series of fascinating vignettes on the relationship between art and religion, creativity and devotion.

Take, for example, Jahan’s elephant, Chota (meaning “small,” as one of the novel’s obtrusive but helpful footnotes tells us). Loved and spoiled by the females in his birth herd, he grows into a confident and hard-working companion and beast of burden, fearing only the “sound of a tiger.” Later he becomes the subject of a commissioned painting, challenging Shafak to delve into the strange mechanics of posing an elephant for a portrait.

Other passages play deftly with the technical jargon of the building trade, never separable from issues of faith and orthodoxy in this era. Here Shafak is at her stylistic best, as in a sequence imagining a grand mufti’s theological interrogations “on the subject of the repair of a holy mosque that was formerly a church,” or in a scene exploring Jahan’s concerns over the destruction of an urban ghetto to make room for the great domed mosque at the center of the narrative. Who would have guessed that strategic urban planning could make for gripping historical fiction?

Nowhere is the novel’s sense of place more deftly established than in Shafak’s passages on the character of Istanbul. Istanbul is both “a honeysuckle of a city,” drawing in faiths and cultures by the hundreds, and a “city of easy forgettings,” lending itself too readily to oblivion.

Other cities figure in the story as well. A jarring but compelling sequence takes place during a sojourn to Rome, where Jahan and a companion seek the company of none other than Michelangelo, busy on the redesign of St. Peter’s. When they’re finally admitted into the presence of Il Divino, they find him “gruff and throaty, like a man used to living inside his mind.” The surreal encounter concludes with an exchange on the virtue of elephants — and Michelangelo is a bit like an aged elephant himself, wizened, grayed, rather tusked.