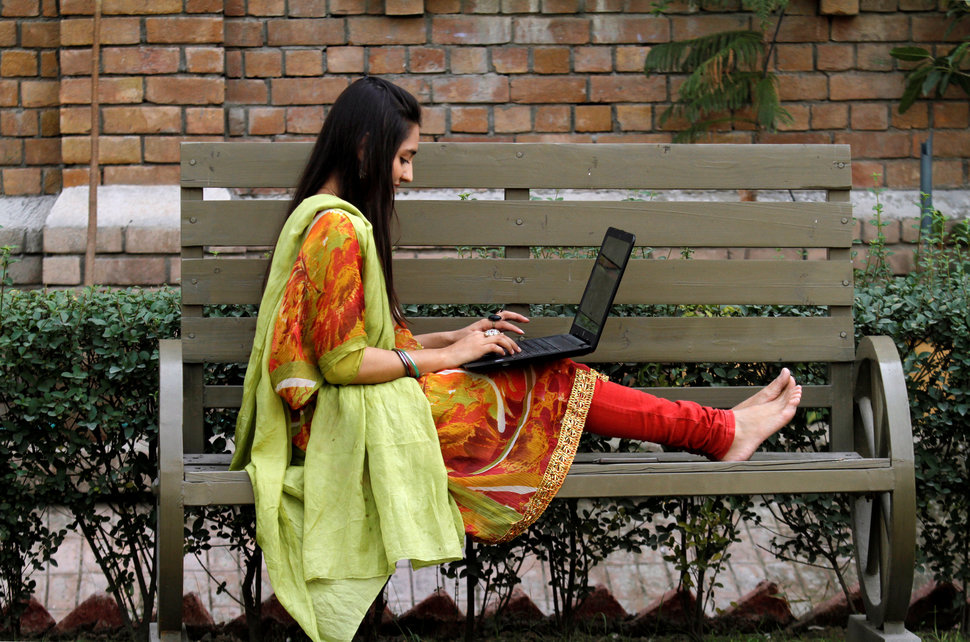 When 28-year-old Dr. Aqsa Sultan was nine months pregnant with her first child, she decided to leave her job at a cardiology institute in Pakistan’s port city of Karachi to be a stay-at-home mom.

But she felt a twinge of resentment watching her husband, also a doctor, go to work each day to treat patients. “I was going through an identity crisis,” Sultan says. “After a while, I got fed up and I wanted to do something to be back in the field.”

Sultan found a way to practice medicine from home. DoctHERs, a telemedicine platform in Pakistan, connects unemployed or underemployed female doctors like Sultan to patients in remote areas. Despite having one of the lowest doctor-to-patient ratios in the world, pressure to prioritize families over careers means that around half of female medical school graduates never enter the workforce.

For those who do overcome myriad obstacles to practice medicine, many drop out of the labor force when they are married or have children. DoctHERs is “about them being able to participate in the workforce and feel a sense of autonomy,” says Asher Hasan, the organization’s co-founder.

Pakistan has one of the world’s lowest rates of female participation in the labor market — it is estimated only 25 percent of women over the age of 15 work. However, there are signs that technology is gradually transforming women’s participation in some areas of the labor force.

Pakistan accounts for 8 percent of the worldwide digital gig economy, trailing only India, Bangladesh and the United States. The rise of gig work (flexible, piecemeal jobs), say some experts, has provided many Pakistani women a foothold in the new digital economy, in some cases shifting women into the primary breadwinner role.

“The gig economy is a unique economic opportunity for women in Pakistan... allowing women to earn a living or access a service from the home when cultural constraints may not allow them to work outside the home,” says Saadia Zahidi, author of Fifty Million Rising: The New Generation of Working Women Transforming the Muslim World.

Sultan normally works in the evenings, when her husband can take over childcare. She selects the number of days and hours she works, and gets paid per video consultation. “They can switch their availability on and off,” adds DoctHERs’ Hasan. “They get to decide their own hours.”

DoctHERs has also been a boon for patients. “People love the idea of having a doctor a message away,” Sultan says. “They don’t have to go to the clinics and wait two hours for an appointment.” Some also feel more comfortable divulging health problems to a woman over a screen. Recently, a female patient disclosed to Sultan that she had been suffering from urinary incontinence for over a decade. In rural Pakistan, it was difficult to find a female doctor to speak to about what the patient saw as an embarrassing ailment.

The digitization of the gig economy hasn’t provided opportunities to everyone, however. Pakistan’s Internet penetration rate is only 22 percent, so most can’t take advantage of technology-based work platforms that favor the urban, English-speaking elite.

And while some digital platforms can afford women greater opportunities, they can also reinforce industry biases and patterns of gender segregation in hiring.

“There is evidence that women are more likely to be hired for “female” jobs (secretarial, writing/translation), but less likely to be hired for “male” jobs (IT and programming),” says University of Southern California professor Hernan Galperin, the lead researcher behind the Future of Work in the Global South initiative. “This type of gender discrimination tends to reinforce sorting mechanisms that lead women to lower-paying jobs and careers,” says Galperin. A 2017 report from the Organization for Economic Cooperation and Development highlighted that women in the gig economy might experience reduced job quality while benefiting from more flexibility.

Moreover, the problems that bedevil the gig economy worldwide do not vanish in emerging economies — most positions lack insurance plans, regular sick days or vacation time. However, the absence of these safety nets is felt less acutely in economies that rarely provide them in the first place. “In Pakistan, we don’t have a trend of health insurance,” says 31-year-old Faiza Yousuf, a freelance app tester and business analyst in Karachi.

This New World
The current capitalist system is broken. Get updates on our progress toward building a fairer world.

For workers who have never benefited from traditional economic protections, the upsides of the gig economy may outweigh the drawbacks. Yousuf finds jobs through freelance marketplaces like Upwork, a global platform for independent contractors.

For her part, she hasn’t experienced any disadvantage from being a woman in the gig economy. Part of the appeal of freelancing online is that international clients “don’t care about your gender,” Yousuf says. “It helps women, especially the ones who are swamped with care work.” Yousuf and her brother are their parents’ primary caretakers, tending to health issues while working full time. Yousuf says the gig economy offers her economic independence and the flexibility to pursue the kind of work she wants.

In a leafy Lahore neighborhood, 28-year-old Farzana Asif is wearing a crisp, gray uniform. In 2013, her husband paid approximately $1,300 to find a job in a Dubai hotel. When he arrived in Dubai, he discovered he had been conned and the job did not exist. The couple had scrounged together the recruitment fee by selling Asif’s jewelry, taking out loans and exhausting their savings.

“It was very difficult for me,” Asif said, whose baby was just 13 days old then. “I had to take care of my child and pay for the household.”

Before marriage, Asif worked at a beauty salon, earning $127 a month. At times, upper-class women would ask Asif to drop by their homes for a pedicure or waxing. The job was inconsistent and the pay highly variable. Since it operated informally, Asif often accepted whatever paltry sum the women doled out.

At-home beauticians have long contended with a lack of standardized rates and exclusion from the formal labor force, says Shameelah Ismail, one of four co-founders of GharPar, an online social enterprise that allows women to work as independent beauticians, delivering at-home services to women across Lahore. By connecting women to the GharPar platform, Ismail says, “the informal market is converted to the formal.”

Asif is now the household’s breadwinner, sometimes bringing home up to $500 a month as a freelance beautician for GharPar. “I’m the only one working in my family,” Asif says.

GharPar has echoes of the Uber model: A beautician receives a request on her phone, which she can either accept or decline. She gets paid on commission, and absorbs the hard costs of running a business, including paying for her own uniform, beauty toolkit and transportation. At the end of a service, the user rates the beautician.

If we want the economy to boom, we need to tap the women.Shameelah Ismail, a co-founder of GharPar

Most salons only pay a fixed salary of around $150 a month, Ismail says, regardless of the number of customers. “In my salon job, even if I put more work into the job, my salary was the same at the end of the month,” Asif says. “Here, if I put in more work, I get paid more; if I put in less, I get less. It’s fair.”

Still, while GharPar has enabled women to become breadwinners, not all men have approved of women in their household taking the lead economic role. “Male members of the family think: ‘If my wife or daughter becomes financially independent, I won’t be able to control her,’” Ismail says.