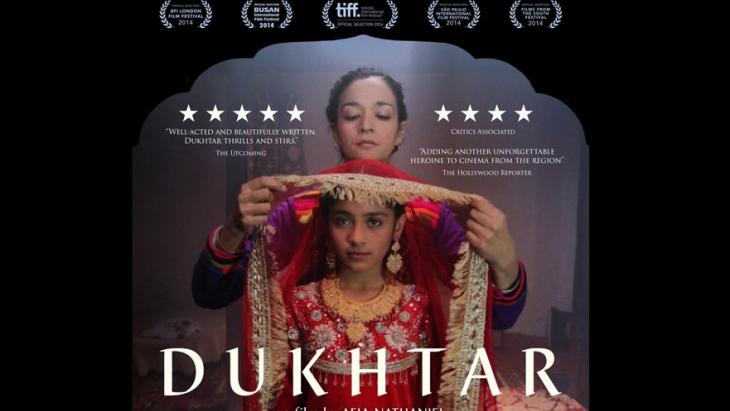 By Marian Brehmer translated by Ron Walker for Qantara
Afia Nathaniel's first full-length feature film "Dukhtar", has been enjoying a great deal of success on the international festival circuit – and causing quite a stir in her home country too. By Marian Brehmer

The north-western tribal province of Khyber Pakthunkhwa in Pakistan is a place of fascinating contrasts: of archaic traditions, breathtaking landscapes and idyllic villages, but it is also a place where the strikingly handsome people are exposed to extreme violence and oppression. It is here that Pakistani film director Afia Nathaniel chose to set her debut feature film "Dukhtar" (daughter).

"Dukhtar" opens with scenes of an unhappy marriage. Preoccupied with her own thoughts, Allah Rakhi is preparing a meal for the husband who resolutely keeps his back turned. He is a Pashtun, it transpires, locked in a bitter tribal feud that has already claimed the lives of two of his sons. As a way out of the predicament, the opposing party suggests a family alliance, a marriage between Allah Rakhi's ten-year-old daughter and her husband's antagonist, an elderly bearded Pashtun leader.

Allah Rakhi is determined not to allow the match to take place and decides on a dangerous escape plan to save her daughter. With the decision comes a sudden and dramatic change of gear as the film is transformed into a fast-moving road movie, the picturesque mountain valley now the hostile backdrop to the two protagonists′ desperate battle for survival.

The inspiration for "Dukhtar" came from the true story of a Pashtun mother of two girls who fled her village, knowing full well that it was a decision that could cost her life. "I could not get the image of that woman on the street out of my mind," Afia Nathaniel says. "I wanted to present the maternal quest against the background of a society struggling with the conflicting priorities of modernity, tradition and fundamentalism." The fact that Nathaniel herself became a mother during the shooting gave her quite a different perspective on the project.

Afia Nathaniel was born in Quetta, Pakistan and grew up in Lahore, where she studied management science at university. She now lives and works as an independent film-maker in the US. Since "Dukhtar" premiered in Toronto in 2014, she has been the recipient of several film festival awards.

The accolades are well deserved. "Dukhtar" has been a bold undertaking. Nathaniel may well be the first female film director to have filmed for over two months in the villages of northern Pakistan. Her team had their work cut out bringing the village communities around to the idea and coping with the challenges of the unpredictable mountain weather. To make the depiction of Pashtun family life as authentic as possible, Nathaniel decided to meet up with some Pashtun women before filming began. One of the things that surprised her most about them was their natural curiosity and thirst for knowledge; their keenness to learn languages, for example, is something that is reflected in the film, with Allah Rakhi's daughter giving her mother English lessons.

The dialogue, the beautifully coloured costumes and the camera work in "Dukhtar" combine to produce a consummate piece of filmmaking, an often entrancingly beautiful and poetic work of art. There is, for example, the extravagantly decorated, life-affirming colourfulness of the lorry, so typical of Pakistan, on which the two women make their escape into the lowlands. It becomes a symbol of the country's indomitable soul, of the refusal, come crises, hell or high water, to be beaten down.

Nathaniel's love of the diversity of Pakistani culture continually shines through; in the way she makes use of Urdu poetry for example, or in the scene that takes us inside the hustle and bustle of a Sufi shrine in Lahore. Although it is a tragic film in its portrayal of the lives and destinies of its female characters, "Dukhtar" steers well clear of becoming the kind of one-sided, negative or cliched picture of the oppression of women we see in films such as "Not without my daughter".

"It's important, if you want to tell stories, to try to comprehend human nature in all its paradoxical complexity", explains Afia Nathaniel. Such insight is made possible here by the finely crafted drama and the excellent actors. Ultimately, it is Allah Rakhi's performance as the indomitable Pashtun mother that carries such powerful conviction and makes the story so compelling.

A breakthrough for Pakistani film

"Dukhtar" also represents a breakthrough for Pakistani film: a pioneering arthouse film with two women in the leading roles and with a social message to boot. "I wanted it to be a very different kind of film from the conventional Pakistani type with its mix of song and dance, where the women are merely sexualised fantasy figures appealing  to male audiences", says Nathaniel.

She was therefore all the more surprised when the first performance of "Dukhtar" in Pakistan sold out within only a few minutes. Under the hashtag #ISupportDukhtar, a number of celebrities then began appealing on the Internet for support to be given to the film's message. It has since been seen by many women, their entire families in tow, not to mention entire school classes and their teachers – hardly your typical arthouse audience. This in itself shows that Nathaniel's ″Dukhtar″ has very definitely struck a chord with the people of her homeland.