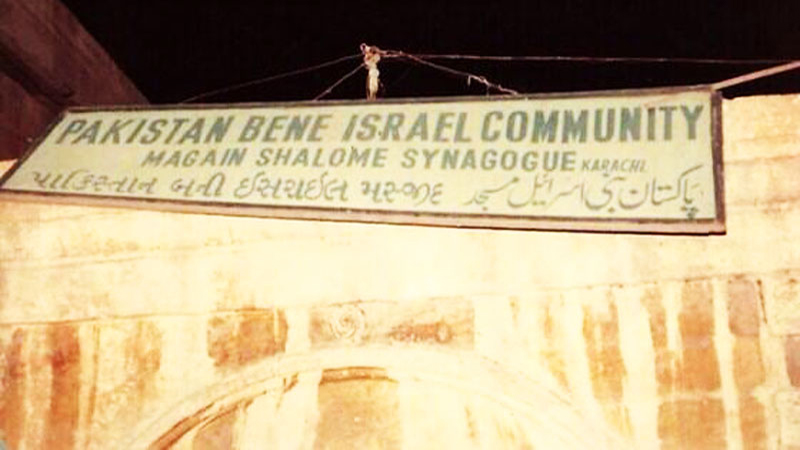 The history of Jews in Pakistan dates at least as far back as 1839.About 1,000 Jews were living in Karachi at the beginning of the twentieth century, mostly Bene Israel Jews from Maharashtra, India. A substantial community resided in Rawalpindi. A smaller population of Jews also lived in Peshawar. The Bene Israel Jews from Maharashtra were concentrated in Karachi. Today, the majority of Bene Israel Jews lives in Israel, India, Canada and the United States, while modern-day Pakistan continues to host a modest Jewish population. According to the National Database and Registration Authority, there are 745 registered Jewish families in Pakistan.

A community of Jews fleeing persecution in Mashhad, Persia, settled in Rawalpindi in 1839. The elaborate early 20th-century synagogue they built still stands on Nishtar Street in Rawalpindi’s Babu Mohallah neighbourhood, between the Bohra Mosque and a large and elaborate Victorian-era church.

According to the 1881 census, there were 153 Jews in Sindh. In the Sindh Gazetteer of 1907, Edward Hamilton Aitken mentions that according to the 1901 census, the total population of Jews in Sindh was 482 and almost all of them lived in Karachi. By 1919, this figure had risen to about 650. By 1947, about 1,500 Jews were living in Sindh with the majority residing in Karachi. Most of these Jews were Bene Israel, and they lived as tradesmen, artisans, poets, philosophers and civil servants.

In 1911, Jews constituted 0.3 percent of Karachi’s population, and at the time of independence from the British Empire, their number had reached 2,500. In her 1947 book ‘Malika-e-Mashriq’ (Queen of the East), Mehmooda Rizwiya has written about the Jewish presence in Karachi. In a paper titled Karachi Ke Yahudi (Karachi’s Jews), Gul Hasan Kalmatti indicates that Jews arrived in Karachi from Maharashtra in the 19th century.

By 2017, according to the Election Commission of Pakistan, around 900 Jews were registered as voters in Pakistan

A variety of associations existed to serve the Jewish community in Pakistan, including Magain Shalome Synagogue, built in 1893 near Ranchore line by Shalome Solomon Umerdekar and his son Gershone Solomon. Other accounts suggest that it was built by Solomon David, a surveyor for the Karachi Municipal Committee and his wife, Sheeoolabai. The synagogue soon became the centre of a small but vibrant Jewish community. A member of this Synagogue, Abraham Reuben, became a councillor in the Karachi City Corporation in 1936.Young Man’s Jewish Association founded in 1903 and aimed to encourage sports as well as religious and social activities of the Bene Israel in Karachi. Karachi Bene Israel Relief Fund was established to support poor Jews in the city. Karachi Jewish Syndicate was formed in 1918, whose aim was to provide homes to poor Jews at reasonable rent fees.

Up to the time of the partition of India, some 1300 Jews remained in Karachi, most of them Bene Israel Jews observing Sephardic Jewish rites. The first real exodus of Jewish refugees from British India to Bombay and other cities in India came just before the creation of Israel in 1948 when Jew-hatred spread to Pakistan. When Israel came into being in 1948, many Jews migrated to Israel via India or to several Commonwealth countries, and after the Arab Israel war, the majority of them left Karachi. By 1953, fewer than 500 Jews were reported to be in all of Pakistan.

From 1971 to present Magain Shalome, the Bene Israel’s only synagogue in Karachi founded under the British Raj was demolished in 1988 to make way for a shopping plaza with the order of the then President of Pakistan General Zia-ul-Haq shortly after the Bene Israel community in Israel petitioned for its maintenance and use as a community centre. In July 1988, the synagogue was burnt and brought down by religious zealots where today a building ‘Madiha Square’ stands.

Dan Kiesel, a Jew of German origin, was employed as a physiotherapist by the Pakistan Cricket Board from 1995-1999. His appointment brought some controversy, as Pakistani politicians questioned the hiring of an Israeli Jew in the Senate of Pakistan.

The term Yehudi and its variants remain a word of serious derision when directed at a Bene Israel or anyone else as noted by Reverend John Wilson, one of the founders of University of Bombay now University of Mumbai. The Bene Israel’s prayers include intercessions on behalf of Her Majesty as in several Commonwealth countries.

In general elections 2013, it was reported that 809 adult Jews were enrolled as voters. The number of Jewish women voters was 427 against 382 men in the community. By 2017, according to the Election Commission of Pakistan, around 900 Jews were registered as voters in the country.

Rachel Joseph, the last known Bene Israel Jew of Pakistan died and is buried in Karachi. Most of the Karachi Jews now live in Ramla, Israel, Mumbai, India and Toronto, Canada, with several spread throughout the United States of America. Developments in the Middle East peace process led to the first high-level meeting between Israeli and Pakistani foreign ministers. The foreign ministers of both countries met publicly for the first time in Istanbul, a diplomatic breakthrough brokered by Turkey. Khursheed Ahmad Kasuri was the Foreign Minister of Pakistan at that time.