Pakistan is a country, which has produced many hidden talents, especially when it comes to minimalist art. Pakistani minimalist artists have become popular for their beautiful approach to minimalism.

Pakistani minimalist artists come from various parts of the country, with some living overseas. Their beautiful artwork is available for enthusiasts to admire all over the world.

These artists present minimalism through various forms. The elements include lines, geometric patterns, grids and even simplistic sculptures and photographs. 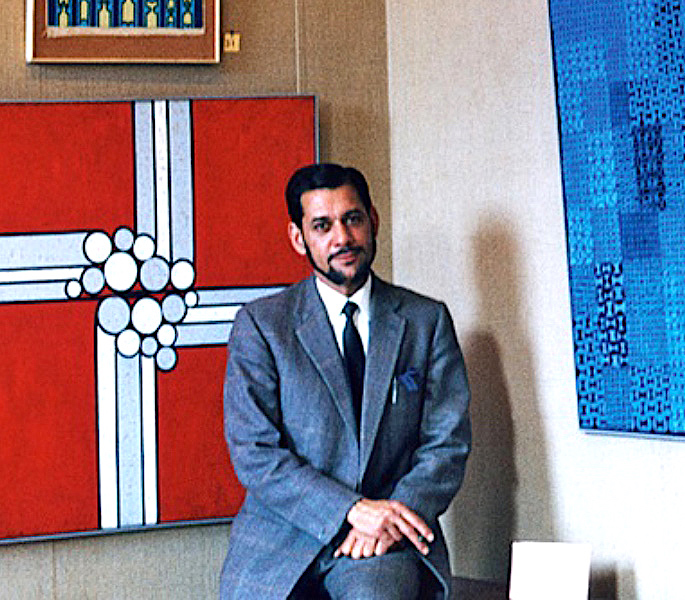 Anwar Jalal Shemza (late) was a Pakistani minimalist artist born in Shimla, India on July 14, 1928. He went to Lahore for further studies.

He studied Persian, Arabic and Philosophy at Punjab University, Lahore in 1943.  The following year he studied at Mayo School of Art, attaining an art diploma in 1947.

Whilst he was in Lahore, he established the Shemza Commercial Art Studio. Shemza then went onto becoming editor for the arts and architecture based magazine, Ehsas.

He also became a leading member of the Lahore Art Circle, a group that supported modernism.

Shemza then obtained a fine art diploma from the Slade School of Fine Art, University College London. To learn printmaking with Anthony Gross, Shemza acquired a British Council scholarship in 1960.

However, he became well-known for his mesmerizing minimalist artwork.

His inspiration to minimalism sprung from the works of Swiss-German painter Paul Klee who had some exquisite paintings.

Shemza has several famous pieces of art. In 1967, his piece Meem Two was launched. The piece is on display at Tate Liverpool, which is an international modern and contemporary art museum.

During the 1960s, Shemza also unveiled the Chessmen One (1961), Composition with Number Six (1966) and Forms Emerging (1967). Each of them is unique in their own way, presenting an authentic form of minimalist art.

Shemza and his family eventually moved to England where he became an art teacher. Following his death on January 18, 1985, Shemza’s work was exhibited in London, Oxford, Durham, Lahore and Karachi. 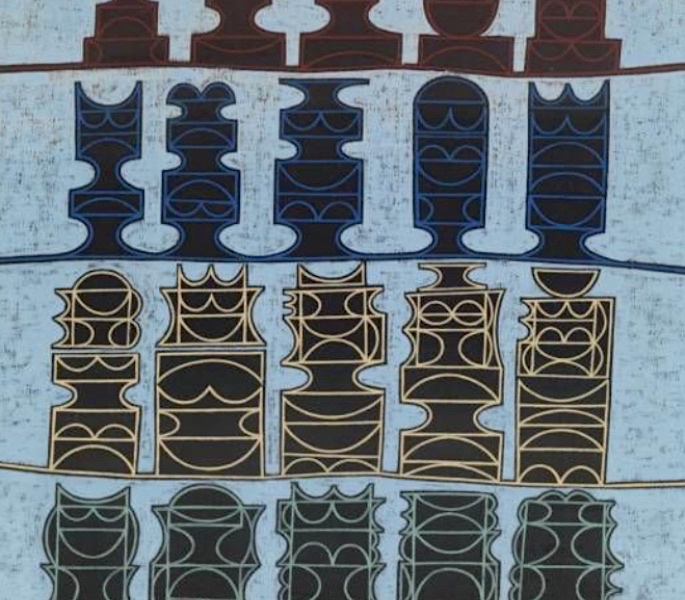 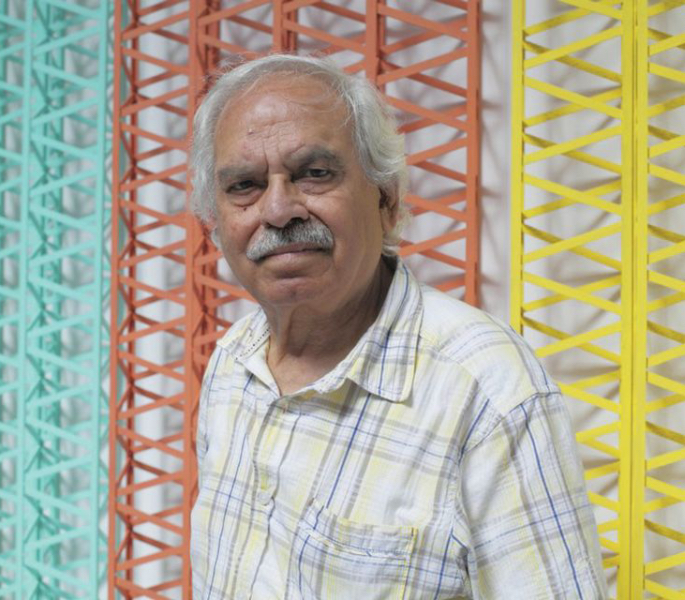 Well-known Pakistani minimalist artist Rasheed Araeen was born on June 15, 1935, in Karachi, Pakistan. After moving from Pakistan to London in 1964, he began his art career.

Araeen is a painter, writer, conceptual artist and sculpturist. At the beginning of his career, he created minimalistic sculptures, with no training what so ever.

In 2019, the Garage Museum in Moscow showcased Araeen’s work, Disco Sailing (1970-1974). This idea consisting of a floating sculpture and dance was recognizable globally.

Furthermore, Araeen’s sculptures have been showcased at many exhibitions in Dubai.

In addition, Araeen also has a collection called Opus (2016), which revolves around the idea of basic symmetry. This represents ideas that are conceptual where the paintings present a diagonal grid pattern. 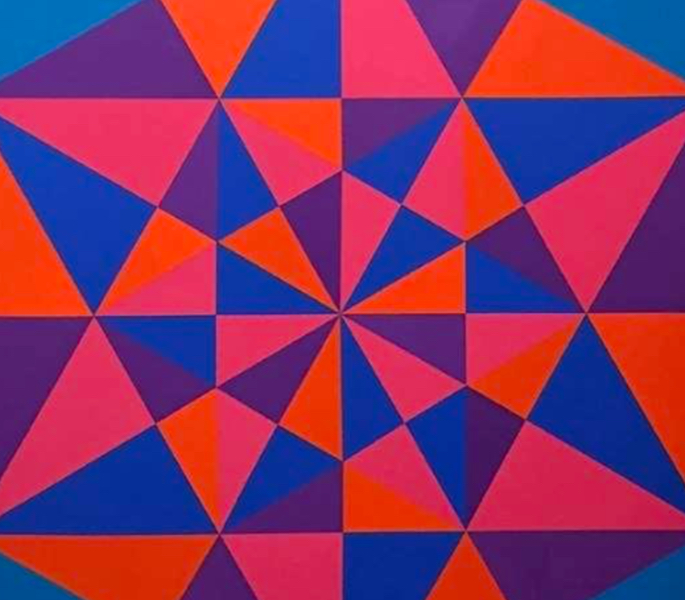 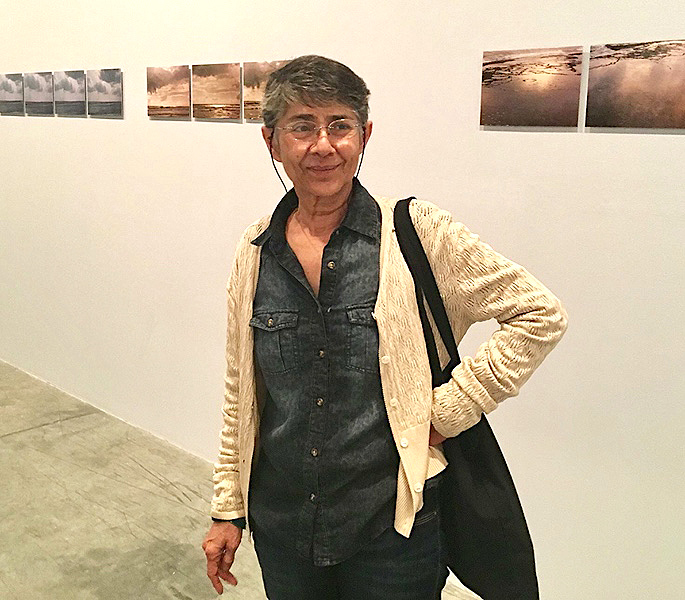 Her work included political posters, collages and artistic drawings. Rukh’s photography and drawings are very simplistic, yet they carry deeper meanings and ideologies.

After studying Fine Art at Punjab University, Lahore, her drawings and paintings began to expand into an interdisciplinary practice.

It was during that period in her artistic life where she discovered the linguistic, social, intellectual and music character of drawing.

These artistic elements were shown through her Hieroglyphics III (Roshnion ka Shehr-1) piece in 2005.

Nature was also a core focus for Rukh when drawing and photographing. Her piece River in an Ocean: 4 in 1992 is an example of this.

Rukh’s vision of incorporating music and dance elements into her work originated from early family life. When she was younger, she grew up with some of Pakistan’s most famous musicians, gaining artistic inspiration.

Hence, this influenced Rukh to incorporate music and dance into her drawings. This was quite evident through her art pieces as her lines and image-making began to take shape.

This was also where the series Hieroglyphics (the 1990s) came into action as a linguistic code or a dance score.

Commenting about the element of dance and music used in Rukh’s work, writer Natasha Ginwala says:

“In her “Hieroglyphics” works- drawings which became extended circuits of rhythm and life observations-the counting of a beat is cast into infinitesimal line and curves forms that improbably manage to account for the movement of music, the chasing of light and the interminable shifts of environmental terrain.”

At the age of sixty-nine, Lala Rukh sadly left this world on July 7, 2017, in Lahore, Pakistan. 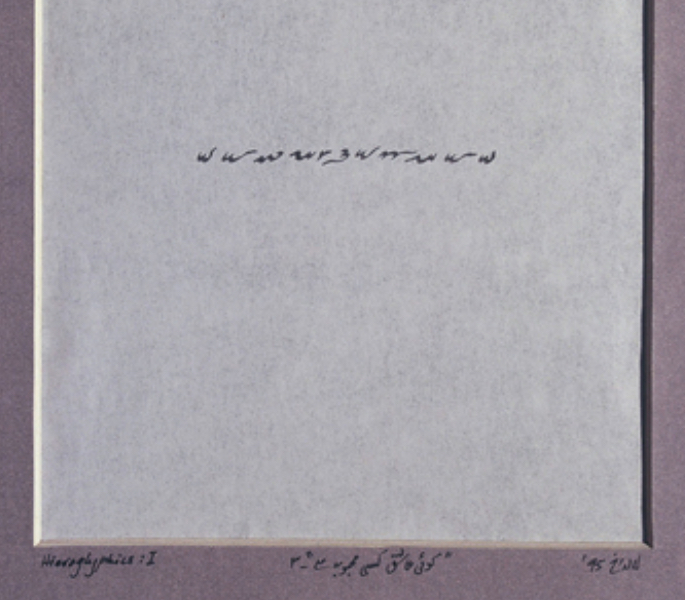 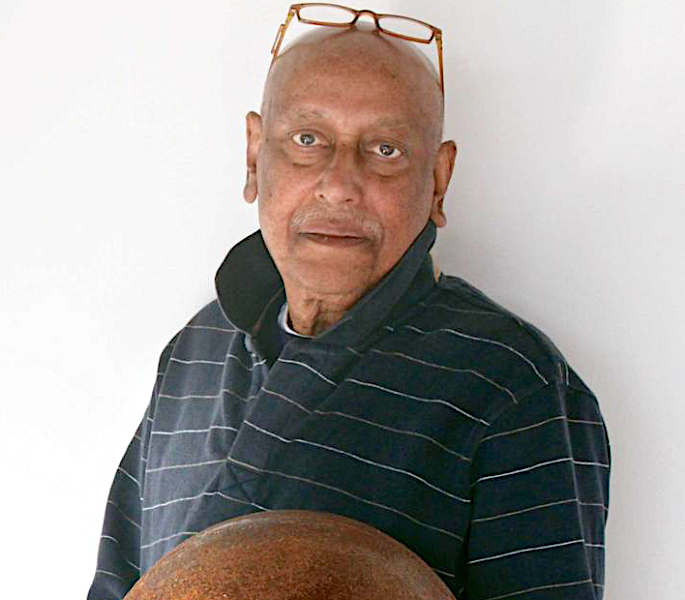 Imran Mir (late) was born during 1950 in Karachi, Pakistan. He was a Pakistani minimalist artist, as well as a sculptor, a trendy advertiser and a designer.

Mir graduated from the Central Institute of Arts and Crafts, Karachi in 1971. His family did not agree with Mir attending an arts university due to social norms.

However, Mir decided to chase his dreams and increase his amazing talent for art. A couple of years down the line in 1978, Mir put on an exhibition showcasing his work.

Consequently, he had confused many art critics as they did not understand his take on minimalism. The bold and modern art of Mir was certainly a huge change for the arts industry in Pakistan.

Graphic designers had a lot of help from Mir due to his enthusiasm and exceptional taste in art. He has helped many huge Pakistani brands such as Habib Oils,  One Potato Two Potato and Dawn News

Mir always had big ideas in mind for his next piece of art. He took inspiration from his travels, often carrying a paper and pencil with him.

Haajra Haider Karrar conducted an interview with Imran Mir for Art Now Pakistan while he was alive. Mir spoke about how he was always trying to keep up with the latest trends and modern designs. He said:

“I feel it is necessary for technology to play some role in an artist’s developmental process even if the involvement is minimal. It indicates an indispensable keeping up with the times we live in.”

Following a protracted illness, at the age of 64, Imran Mir passed away in Karachi on October 28, 2014. 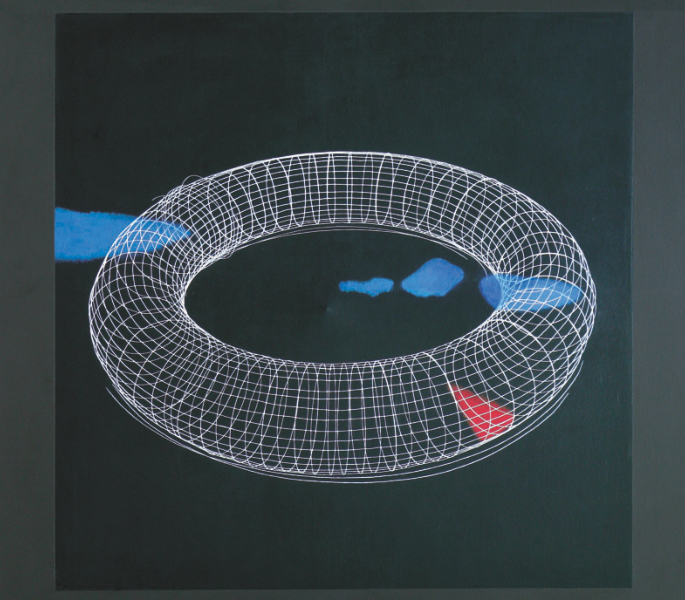 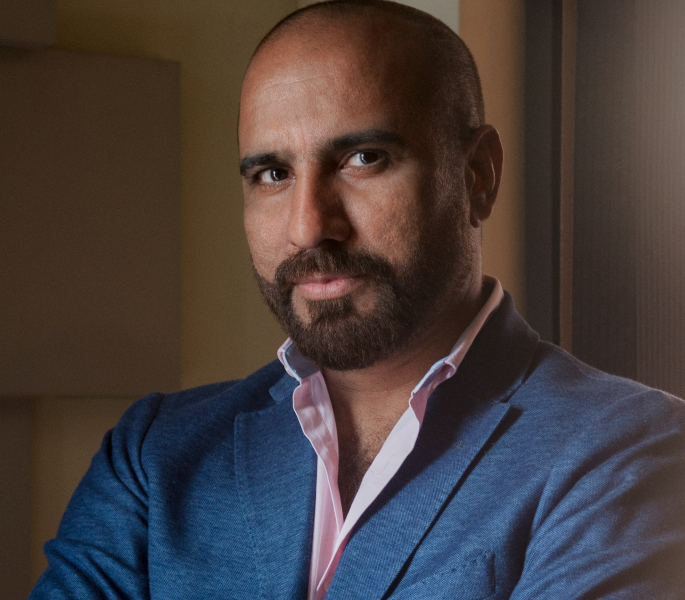 Born in Lahore, Pakistan, during 1968, Rashid Rana is a popular Pakistani minimalist artist of  his generation.

In 1992, Rana graduated from National College of Arts in Lahore with a degree in Fine Arts.

In 1994, he then completed a Masters in Fine Arts from Massachusetts College of Art in Boston, Massachusetts, USA.

Rather than solely using a paintbrush and a canvas, Rana uses a variety of methods and materials.

He collaborates with billboard painters, along with creating collages using materials, photo sculptures and mosaics,

The discovery of media and identity is key when Rana creates a work of art. Pop culture is also the main base of his work.

He uses established pieces of art and turns them into his own, using authentic techniques.

His work also consists of everyday issues such as tradition and urbanisation. He offers minimalistic designs using geometric abstracts and often relates to the history of Pakistani art.

Besides Karachi, Rana has taken his work to many exhibitions internationally. These include cities like London, Dubai and Singapore.

One meaningful and mesmerising, artistic piece of Rana’s is The World is Not Enough (2006).

This piece is made up of photographs of social waste from a landfill site near Lahore. Hundreds of images showcasing trash have been digitally stitched onto this piece of art.

The beauty of the image is based upon a portrayal of the city’s decay. 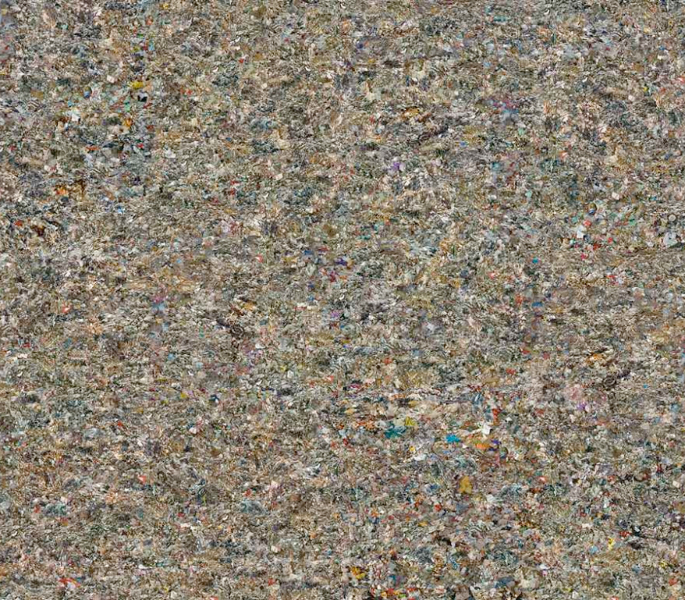 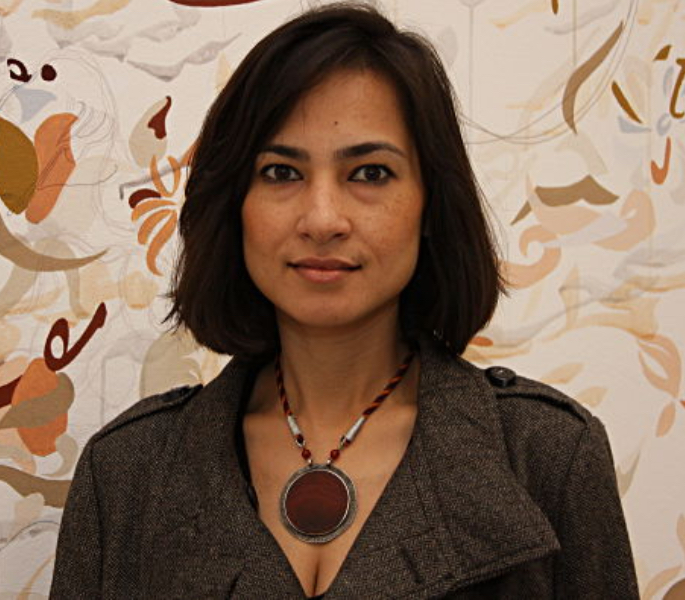 Pakistani minimalist artist Shahzia Sikander was born in Lahore, Pakistan during 1969. In 1992, she studied Fine Arts at the National College of Arts in Lahore.

In 1995, she earnt a Fine Arts Masters degree in Painting and Printmaking from the private Rhode Island School of Design. Ever since then Shahzia has made New York, USA her home.

Shahzia is best known for her Mughal and Persian miniature paintings. However, she also expresses her talents through other forms of art too.

Shahzia is also a muralist, an installation artist, performance artist and a mixed media artist.

She was taught art in the Pakistani, traditional way. However, she cleverly incorporates flares of modernity in her pieces to make them unique.

Her work of minimalism takes inspiration from issues of  Middle Eastern identities. Aside from this, she also takes influence from art-historical references.

One example of her minimalist piece is Night Flight (2015-2016). This piece consists of ink, gouache and gold leaves. Many people can find this form of art at the Sean Kelly Gallery, New York.

Moreover, Shazia has made an appearance at various artistic venues, including the Museum of Modern Art (2005) and Museum Ludwig in Germany (1999).

Celebrating her fine pieces of minimalist art, she has won many awards. These include the Joan Mitchell Award (1999), the MacArthur Fellows Program (2006) and the Kipling Award (1993). 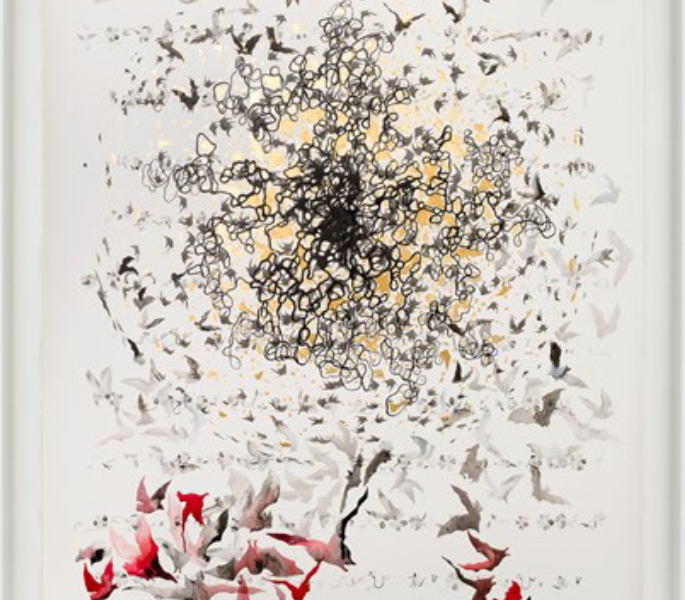 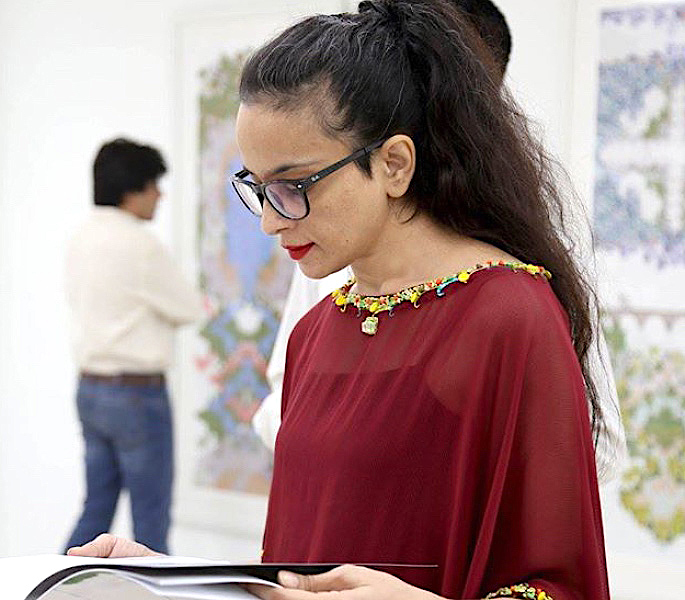 Xandria Noir was born in Karachi, Pakistan, during 1972. This self-taught Pakistani minimalist artist who holds a Bachelors in Social Sciences works with drawings, paintings, video art and photography.

She started her career by creating semi-minimalist art on various types of materials. These materials involved, paper, canvas, wood and pottery.

Xandria portrays her personality and views through art, reflecting trauma and emotional suffering. She works on a much larger scale, bringing more definition and meaning to her pieces.

Her work is made up of black, bold strokes, with a contrast of bright colours to stand out from the crowd.

During 2013 and 2014, her work was inspired by Clyfford Still, Jackson Pollock, Robert Motherwell and Franz Kline.

Over the years, her pieces have become much more minimalistic, modern and trendy. She achieves this look through light and lines. She incorporates these via various dimensions, which present weightless spaces.

Xandria creates paintings to anger, upset and frustrate viewers through the different anti-social elements in her art. The body of her work links with sin, temptation, redemption and guilt.

Xandria has presented her impressive minimalist work at the Islamabad Art Festival and Sheraton Gallery in Karachi.

Les Frontieres: Lyon, Anxiety and when I will go after them (2014) are some of her minimalist paintings. Each of them shares different meanings and use various shapes, techniques and colours. 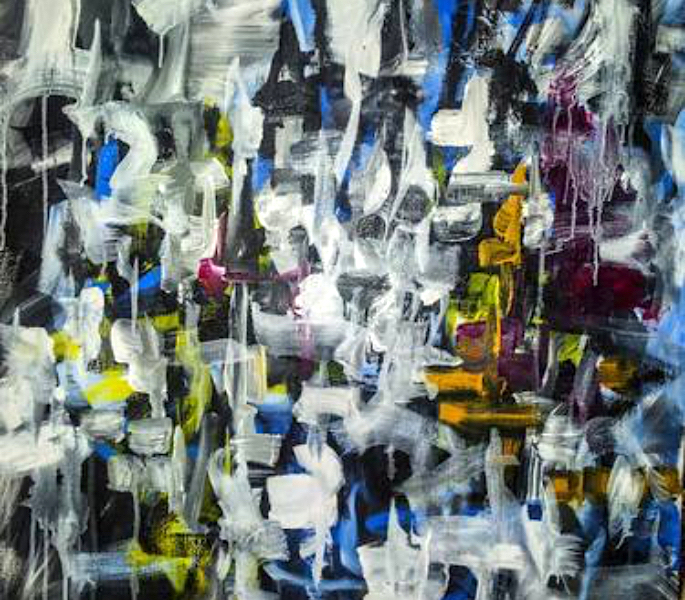 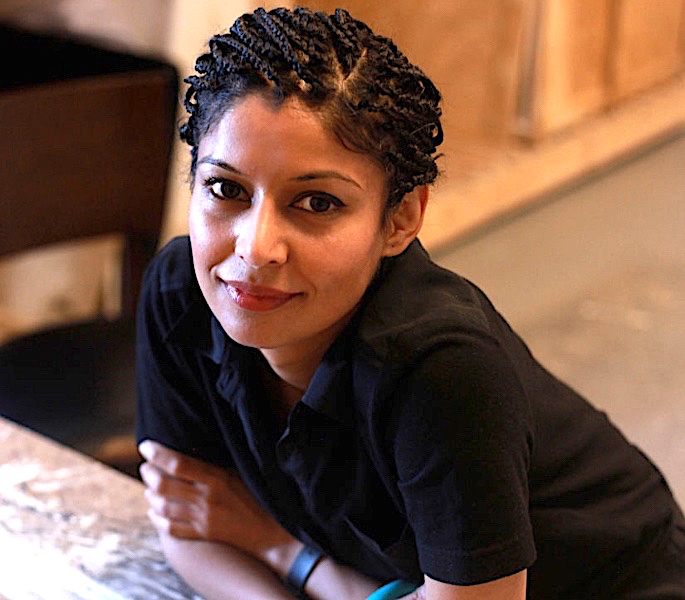 Born in Kuwait City, Kuwait during 1976, Hamra Abbas is a Pakistani minimalist artist. In terms of working and living, Hamra shifts between Boston, USA and Lahore, Pakistan.

Hamra’s artistic work is based upon her own encounters and experiences through an image, a gesture or an icon. Her main purpose is to break down the act of seeing by reconstructing images.