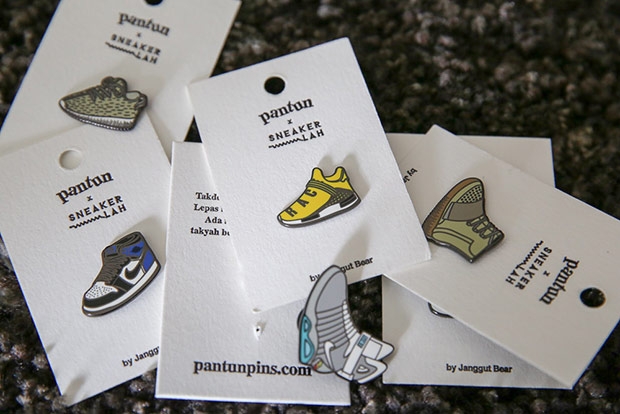 The story of Pantun Pins reads like a fairytale. What started as a just-for-fun project took off in a big way for four friends: SDB, Chern, Shaq and Nafsu.

Literally wearable art, their enamel pins immortalise items from our day-to-day life that only Malaysians can identify with. It also incorporates pop culture references that make Pantun Pins highly sought after collectibles that exude a cool factor.

Started this April, the first collection for Pantun Pins was a runaway success. The pins’ popularity is credited to the Malaysian cultural references that make their customers feel connected to the brand. Who can resist nasi lemak or “fat rice” — every Malaysian’s favourite breakfast all wrapped up in banana leaf and newspaper? There’s also a lot of national pride involved as seen with the pin that carries a replica of our Malaysian passport with its distinct red cover.

The vision for the pin business started about a year ago when they recognised its potential. “It is very versatile and unusual. One size fits all, no matter what your age, style, built or preferences, you can wear a pin,” says Shaq.

Originally, the intention was to bring down some pins from the US, where it was making a comeback as a fashion accessory for hats and jackets. As Shaq adds, “That movement was not in Malaysia yet so we wanted to stand out from the rest.” 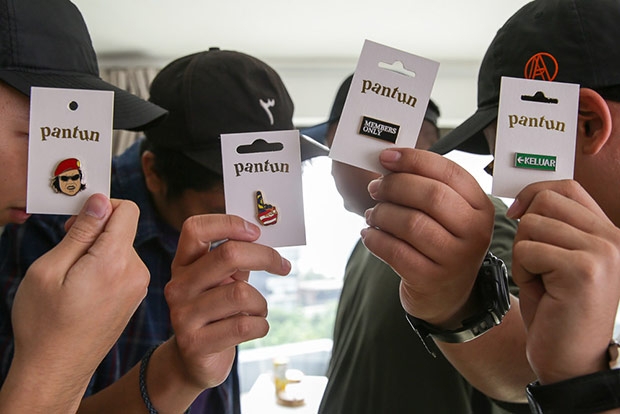 As they researched further, they realised the imported pins would end up being unaffordable to most people. Still determined to pursue the venture, they decided to start designing and making their own pins.

Unlike other entrepreneurs who relish the limelight, the mysterious foursome behind Pantun Pins are extremely publicity shy and prefer to stay in the background. “We want the pins to speak for themselves and don’t want us to influence Pantun,” explained Shaq. 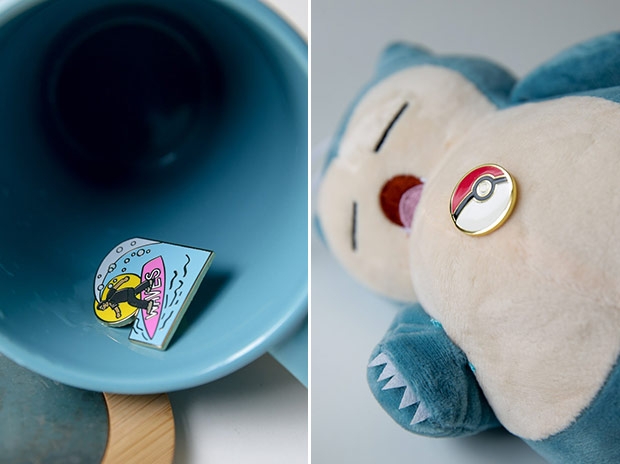 When it came to giving a name to their venture, they decided to give it a Malay name since their designs are heavily interlinked to Malaysia. Pantun was chosen since the pins tell a story and for the quartet, it’s a fun way to deliver that story.

For the pin designs, it’s a collaborative effort from the whole team. In fact, they admit that there is some selfishness in their designs since it’s not due to market demand but stems from their own personal likes.

As Shaq explains, “We’re doing it for ourselves hence the fun side of the project.” Usually they will brainstorm their ideas, whereby anything is fair game to them — a school snack, current news or even famous singers... and the list goes on. 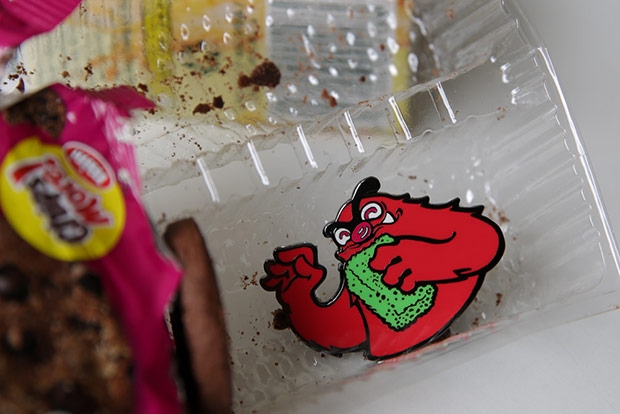 Most importantly, they all share an emotional connection. Sometimes it’s the most unlikely items, like the TNB electric box with its distinct red, white and blue colours that they released for a laugh and is now completely sold out.

Even “Ikat Tepi”, an everyday reference to how stalls tie our packet drinks is now immortalised on an enamel pin. Even though most of their pins have a Malaysian slant, they also recognise that the pins need a universal appeal to attract overseas customers. “As much as we love Malaysia, we also want to grow and get the pins out there and beyond,” said Shaq.

Once the design is agreed upon, it’s up to Chern whom Shaq calls their “Picasso of Pantun” to work on the designs. Usually this takes up to one to two weeks. Your favourite pop-culture character or even that triple 5 notebook you grew up with will get a makeover under his capable hands. 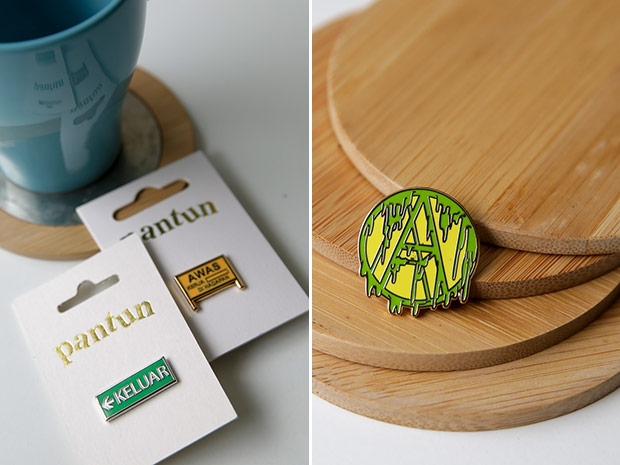 It’s not that easy to envision the design since it may turn out differently once it’s incorporated into a pin. What may work on an A4 size illustration can be entirely different as it loses those details that give meaning to it once it is shrunk to a pin. After the design is agreed upon, the pins are sent to be made. Everything is made by hand and completed within two weeks.

Every design is limited. Shaq explains to us that they only make 100 pins of each design. Devoted fans often wait in anticipation for their new releases to grab them before they run out. Some even come from as far as Dubai.

For their older designs, many requests have been made for them to be released again. The pins are priced at RM25 each. For the special collections, it’s RM30 for each pin. “We didn’t want it to be too cheap since people will take it for granted and it’s also a collector’s item,” said Shaq.

With local pin makers like Beanit and now Pantun Pins, there is a growing appreciation for pins among consumers and some local clothing brands are also jumping on the bandwagon.

Joining the Pantun Pins’ line-up are their artist collaborations with famed graffiti artist Cloakwork and Buffergang. You may have noticed Cloakwork’s graffiti around town, emblazoned on an abandoned building next to the open air car park along Jalan Raja Chulan or even hidden in an alley at Bangsar’s Telawi area. Buffergang interprets pop culture icons like R&B singer Drake, Kanye West and even the Japanese Pocky snack. 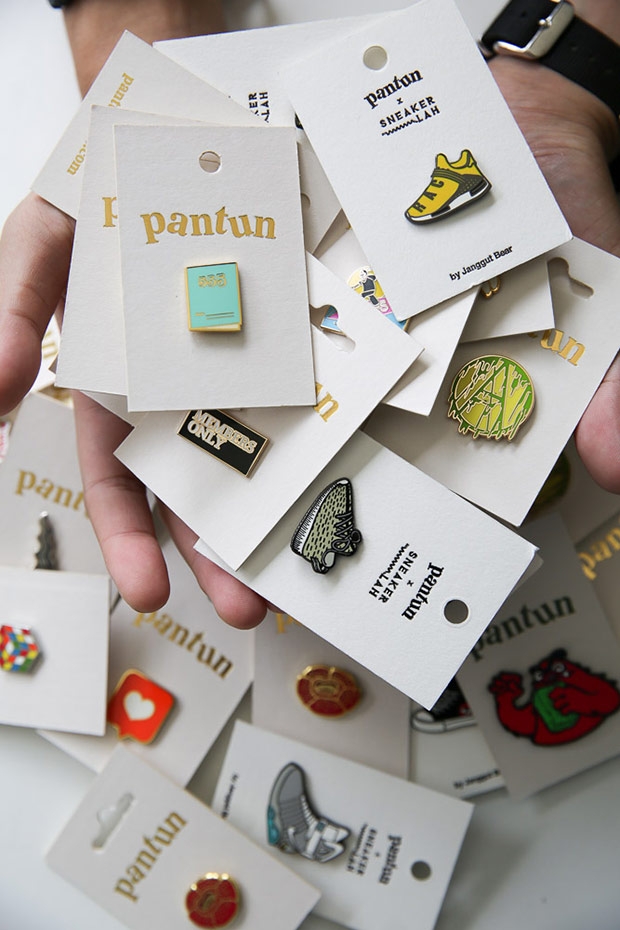 Pantun Pins also does joint projects with others such as the design firm Malaya Co., the cafe Thursdvys and even Softsrve. “It’s a win-win platform for individual labels,” said Shaq.

Wearing that pin for your favourite ice cream or even your cup of Java means more than just a declaration of your tastebuds. It’s also to show your support for these independent small businesses. Close to the founders’ hearts is their most recent collaboration with SneakerLAH, a sneaker convention. Launched in October, the seven pins are made with illustrations by Janggut Bear, an artist who has made a name with his trademark “fluffy sneakers.” Devoted sneaker fans will recognise the designs inspired by the likes of Adidas Yeezy Boost 350, Comme Des Garçons x Converse Chuck Taylor and Air Jordan 5 Retro x Supreme.

From this month onwards, keep an eye out for Pantun Pins’ third collection. Like previous collections, there’s no set theme but it leans mostly towards Malaysian inspired designs that are retro. One pin pays homage to the roti man. “It’s a tribute to an unsung childhood hero,” explained Nafsu.

He recalls how he used to be holed up at home studying for his examinations and that distinct honk from the motorcycle would make his day a little brighter. That’s the charm of Pantun Pins, as every pin tells a story whether it’s one that pokes fun or just a sweet memory about growing up.