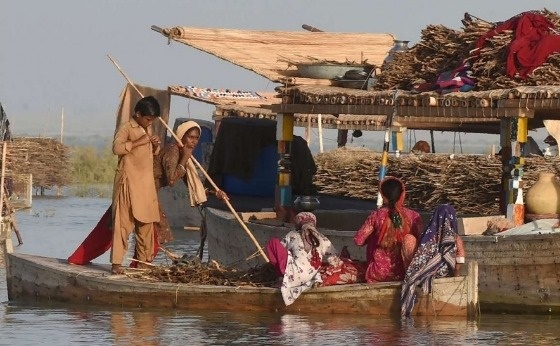 Mohanna women travel on a satellite boat to their floating boathouse on Manchar Lake. Photo: AFP

For generations the Mohanna tribe have lived, loved, worked, and played on Pakistan’s Manchar Lake; their floating settlement serving their needs from birth to death.

But an unrelenting flow of toxic wastewater has poured into the lake – a by-product of industrialisation and aggressive agricultural practices upstream – and has slowly rendered it inhospitable, poisoning the water and almost everything in it. For fishermen such as Mohammed Yusuf, life on the lake has become intolerable.

“When we were young, our lives were very good. Every kind of fish was available. Our earnings were good,” he said.

“When my father would go fishing he would bring back over a hundred kilos of fish. Now the situation has changed. The fish is extinct because of the bad water.”

The wooden, flat-bottomed barge he lives in with his mother, wife, and their nine children, has ornate carvings but it has seen better days.

Now Yusuf can barely catch enough fish to feed his family, let alone save the money he needs to maintain his boat. He estimated they have just five years before it is beyond repair and fears he will soon have to leave the place where he was born.

And yet their whole life is packed into this floating home: clothes and linen are stacked in the stern, kitchenware and food under the prow. Cooking is done down in the hold, on a little earthen hearth fed by the stems of aquatic plants.

“If it is hot we sleep on the roof, in the winter we sleep inside the boat on the floor,” Yusuf said.

The size of Manchar Lake, one of the largest fresh water reserves in Pakistan, varies depending on rainfall. It can measure more than 250 square kilometres after the annual monsoon.

In the 1970s a series of drains and canals were built to carry sewage to the lake from several major cities in Sindh province, as well as industrial wastewater, and overflow from rice paddies full of pesticides and fertilisers.

The system, known as the Right Bank Outfall Drain (RBOD), also dumps into the lake vast quantities of brackish water drained from the right bank of the Indus to make the surrounding land arable.

Meanwhile, mountain torrents supplying fresh water have declined. So too has the flow of the Indus itself into the lake, due to the building of dams and greater irrigation, explained Mustafa Mirani of the Pakistani Fishermen Forum, which campaigns for the protection and conservation of the lake.

As far back as the 1990s, assessments found the land and the water was being destroyed by a toxic mix of saline, chemicals and sewage, explains the activist, who grew up on the lake.

It was then proposed to re-route the RBOD to empty into the Arabian Sea further south. But the plan has been suspended for years due to lack of funds, and dirty water continues to flow into the lake untreated and unabated. 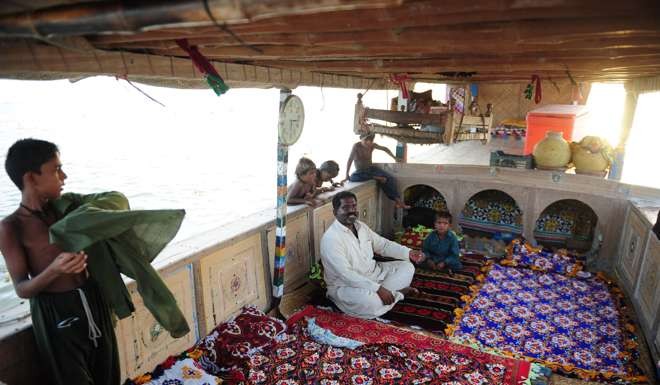 The water is no longer drinkable. The pollution has killed off flora and fauna and it has become impossible to grow vegetables in the toxic silt.

Migrating birds, which once came in their thousands to rest among the reeds on the lake, are now rarely seen.

Fish stocks have also plummeted. In the 1970s, more than 15,000 tonnes were netted each year compared with 2,000-3,800 tonnes in recent years, according to the Sindh Fisheries Department.

The number of the Mohanna tribe living around the lake has halved in the last 25 years, according to Mirani.

“When I was growing I saw some 400 boats and that many families on them. All of them, eating, sleeping, marrying, all would take place on the boats,” he recalled. “Now, because of poverty, they can’t mend or repair their boats. So gradually all these boats are vanishing.”

There are now just four dozen floating homes left on the lake. But life on the shore is tough too. Their rudimentary villages are made from mud and have little sanitation.

Saindad, a toothless sexagenarian who now lives on the shore in a shabby reed cabin, has had no source of income since his last boat sank.

“We don’t have water or any filtration facility. And no one cares about us. We are so poor we don’t even have cooking utensils or other essential things,” he said.

His sons left to look for work in neighbouring cities. Some of of the lake’s inhabitants have taken to fishing the seas near Karachi or neighbouring Balochistan.

The Pakistani Supreme Court took up the issue in 2010, but has failed to force government action.

“This lake is gifted from God,” sighed Mirani. “But all its beauty has been ruined.”