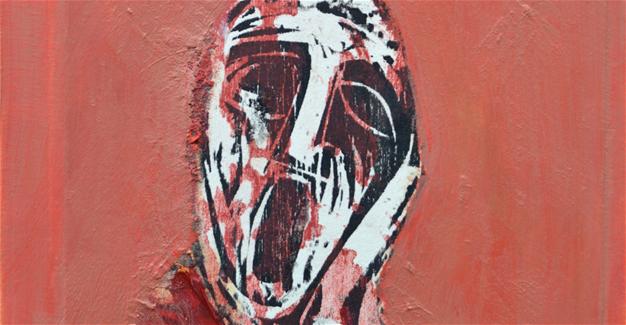 Three decades ago, in the wake of 1980 military coup, İsmail Yıldırım left Turkey to go to Paris, via Lebanon. He also helped his friend and prison-mate Yılmaz Güney, the award-winning Turkish director and actor, to escape. Despite Yıldırım’s flight, however, his mind and his paintings remained firmly on Turkey and Turkish issues.

“We all fight our own demons,” he said at the opening of an exhibition of his paintings at Galeri A in İzmir in western Turkey. “I am in Paris and likely to remain there. But most of my paintings, what I read and what I draw, are about Turkey.”

The paintings on the walls of the gallery, an old Greek house that somehow escaped the Great Fire of Izmir in 1923 and the brutal replacement of old houses with seven-storey apartments, confirm his words. Paintings with faces and figures against a dark background, with slashes of red and orange, are part of a series titled “Sivas” – in reference to the brutal burning of 35 people, mostly Alevi intellectuals, who had gathered for a cultural festival in Sivas, by a fanatic mob in 1993.

The attack against the intellectuals not only tormented Yıldırım but pushed him to read about Sivas’ history and heritage and to discover the city’s burning 900 years ago, in 1059, by the Turks who came to Anatolia.

“The use of fire crept into his works on Sivas: He burnt the wood, then sculpted them into half-deformed faces. He burned cork and rubbed it into his paintings to create a blackness that surrounded the red-slashed faces. The city of Sivas and burning became linked in the mind and work of the artist – and in the homes of those who collected his work.

The Gezi Park events, which broke out in 2013, came when Yıldırım was working on a series called “The Circus” – a mix of the modern circuses and the wider, historic Circus, where slaves fought with wide animals as the Romans looked on. The protests, initially against an urban development plan for the central Istanbul park, quickly turned into a wider range of issues such as freedom of the press, expression, assembly, and the lack of transparency in the government in face of corruption allegations. The protestors were brutally suppressed by police with tear gas and water cannon.

Two figures in particular - the “woman in the red dress” facing pressured water and the young “standing man” in İstiklal Square - were iconic figures of the Gezi protests, with their images captured in photos and memes. Yıldırım addresses both in his new exhibition.

“The woman in the red dress is intertwined with the confetti and lights of the circus and the standing man becomes an acrobat standing on a rope,” he told a small group at the opening of his exhibition in İzmir.

Another set of paintings, including one called “Everyday a Saturday” depicts the Saturday Mothers, a group that has been demanding justice for missing relatives and for their offenders to be put on trial for 20 years in Istanbul’s Galatasaray Square since their first sit-in in May 1995.

“I am very critical of Turkey. But I hate it when the others, particularly the French, are also critical of it. I tell them that everyone should fight their own demons, mind their own idiots,” Yıldırım said.

But Yıldırım’s own demons also include ones from the Middle East. During the first Gulf War in the 1990s, he travelled to Egypt (“because I could not get to Iraq”) to get a grip of the destruction that gripped the Middle East. He later opened an exhibition of those paintings in Paris on Iraq.

Born in Konya, educated in Istanbul, now living in Paris, Yıldırım is an outspoken artist, whose words mix local Turkish expressions with Parisian witticisms and references. He describes himself as an atheist but with a thorough knowledge of religion, and quotes philosopher Gilles Deleuze on art.

He still toys with the idea of returning to Turkey but seems settled in Paris. “I married a French woman and we have made our home there. As long as we are togethe