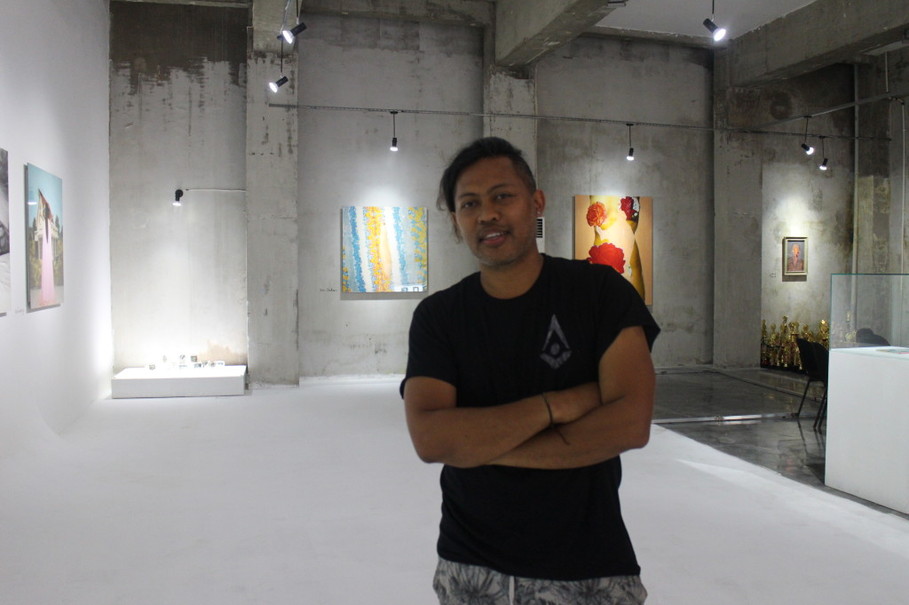 The launch was marked with an open studio day, with guests visiting the artist's Fatmawati studio and enjoying an exhibition of his photo works, attending workshops and a book signing session.

"Visual Diary Vol. 1" is a collection of Anton's diary entries created over the past three years. Anton said he has a habit of doodling in a diary. Later on, he realized the activity is his instant response to any situation, through sketches, painting, writing random thoughts and making photo collages.

"It's almost like a brainstorming session. It is where I pour my spontaneous thoughts, such as writing, painting, portraits. I don't limit myself, so it can be anything," he said.

Anton said the biggest appeal of the book is that it offers no specific concept. A quick read of the book displays a large variety of content as Anton jumps from his random thoughts on existential matters, such as superstition and self identity, to various pieces of modified portraits, and something as leisurely as recipes and his cooking experiences.

"I wanted to show that we can make art without concept. Have no fear. I wanted to share this spirit to be brave, to be unlimited and to be yourself," he said.

This collection of random things is also Anton's way of protecting his spontaneous side and keeping his artsy perspective in the right balance. He finds himself keep returning to them when seeking for photo shoot inspiration.

A photo exhibition in the gallery displays glossy images from Anton's previous works for clients such as Commonwealth Bank and LG electronic goods. As a commercial photographer, Anton deals with the demand for stylish and bright advertorial images on a daily basis. This constant striving for perfection leaves no space for creativity and the 40-year old said he must find ways to keep himself at the edge. As an example, Anton said he never prepares himself before a pitching session with potential clients.

"My visual diaries are my saving account. I just take them to the meeting and present them as my ideas," he said.

Anton has juggled many jobs in the art industry for two decades. He began as a video editor, photographer and art director, before establishing Third Eye Studio as a commercial space for his clients in 2005. Even so, Anton believes his real passion lies in teaching. In 2006, he started his own informal school of photography. The Kelas Pagi (morning class) program sees students gather at the terrace of Anton's house in South Jakarta from 6 to 11 a.m. on the weekend to learn about photography for free.

In 2009, the Kelas Pagi program expanded to his home town in Yogyakarta, where it is still running by volunteers. The program has since seen over 3,000 students. In 2012, Anton renamed his office into Third Eye Space to facilitate his creative explorations, including the Kelas Pagi program.

"Education is the foundation of our perception today. An education should be liberating. It provides a way for us to see different perceptions that will make us a wise person," he said.

Anton said he has as a pile of more than 20 visual diaries, which all is a result of his own constant brainstorming sessions since he was a university student in 1995. He plans to publish more books in the future.

The first volume of the book is available to purchase from binatangpress.com for Rp 200,000 ($15) per copy. The revenue for "Visual Diary Vol. 1" will be used to conduct the first ever Kelas Pagi in Sentani, Papua.