By Ahmed Ali Akbar for BuzzFeed.

“People would approach us and ask questions about what we were doing. They were… curious to know more because they did not know much about Muslims or Islam except from what they saw on television.”

Places You’ll Pray is a photo series which captures the different places Americans Muslims perform their five daily prayers outside the mosque and home. 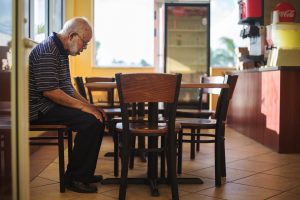 The photographer, Sana Ullah, told BuzzFeed in an email that she got the idea for the series when her family was at the mall during prayer time and prayed in a dressing room.

She said her goal is not to “flaunt the idea of piety or prayer,” but to demonstrate the ease with which Muslims pray and to portray a side of Muslim life rarely covered in media. “(The) majority of Muslims are not the evil that hurts this world and its people on it, but rather Muslims (are) constantly taught to love it sincerely and find peace with themselves five times a day,” she said.

Ullah usually asks her subjects to take them to a place they remember praying in the past, and then photographs them there.

Ullah said that she often accompanies her subjects in group prayer and then photographs them during their individual “sunnah” prayer.

She interviews them about their memories of how they came to pray in that location.

Above, on a Florida basketball court, the subject told Ullah: “The first time I prayed here was in 7th grade with about 15 other brothers. At first, it was awkward praying in the courts, but after some time, it felt like every other salah at the masjid.”

Although in many cases, she takes photos of the impromptu places her subjects find to pray, like this one at the Metropolitan Museum of Art.

Or this one of a woman praying in the van on her way to a wedding ceremony.

While her photo series is based in the U.S., she also crowdsources photos from others on her Instagram.

Ullah says her she hoped to “build a bridge of communication about Islam” while embracing her Muslim identity.

“You are your own best narrator,” she said. “You know yourself more than anyone else and you can tell your story the best.”

You can submit photos to Places to Pray or find more photos at her website.