By WITW Staff for Women In The World

The plight of the 276 Chibok girls, who were kidnapped from their school in Nigeria by the Islamist group Boko Haram, has become a matter of international attention, advocacy, and concern. But according to photojournalist Stephanie Sinclair, the Chibok girls represent only a fraction of the thousands of girls who have been kidnapped and turned into child brides since Boko Haram began its insurgency in 2009.

In a multimedia piece for The New York Times, Sinclair chronicles the stories of girls who were snatched from their homes, married off to militant fighters, and miraculously managed to escape. All of Sinclair’s subjects were children at the time of their abduction; when they returned to their villages, many were mothers. 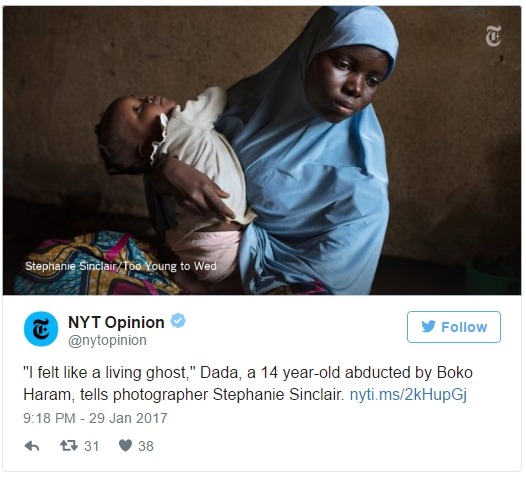 Hawa, for example, was 15 when fighters forced their way into her home and demanded that her parents give her up as a bride. They refused, so the fighters killed them. Hawa was brought into the bush and married to a soldier. She gave birth to a baby boy in the forest, and when he was around 6 months old, she decided to run away. Hawa escaped, but tragedy followed her — read more about her story, and the stories of the other former child brides, at the The New York Times.