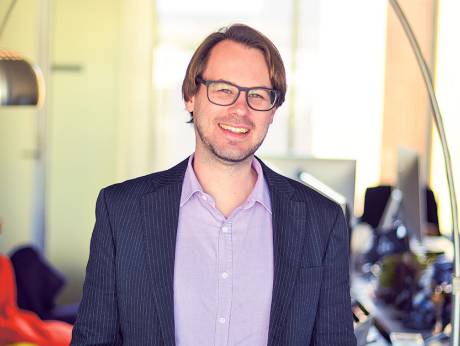 By Ferdous Bahar, for Gulf News

As he sips his regular cappuccino and starts on a rather late lunch of smoked salmon and salad in a small café in South Sydney, Peter Gould easily comes across as just another ordinary, unassuming Aussie guy.

In fact, he has already referred to himself as a “random white guy from Australia” twice in our conversation.

But this is far from true.

In addition to running a successful international branding and design firm, Gould’s contemporary Islamic artwork and photography have featured in exhibitions around the world, including in Saudi Arabia, Turkey, the United States, the United Kingdom, Malaysia and the United Arab Emirates.

This award was launched in 2013 under the patronage of Shaikh Mohammad Bin Rashid Al Maktoum, Vice-President and Prime Minister of the UAE and Ruler of Dubai.

The award recognises innovation and world-class business initiatives that contribute to the social and economic welfare of Muslims.

While Gould is known for his innovative Islamic design and entrepreneurship, he remembers a time when religion did not appeal to him at all. He only developed an interest in Islam in his final year of high school after getting to know a Muslim student he had met at the bus stop.

“The reality was that I hadn’t looked at religion with any depth and I was just another typical, arrogant, anti-religion kind of guy until I met someone who forced me to properly look at it . I thought, ‘OK, well here is someone who is very smart, intelligent — why the heck would they believe in God?’ And that really sent me on a personal path of discovery,” the 34-year-old says.

He says he would pester his friend with “stupid questions” about the authenticity of Islam and spent time researching the religion himself.

“I started reading, I started attending lectures, and I just dove right in. I felt more and more convinced that there was a deep truth to Islam.”

A few years after graduating from high school Gould converted to Islam one evening during Ramadan in 2002.

“The inner reality of Islam absolutely appealed to me — and what I would now call ‘sakinah’ — you know that inner peace and calm — that’s what I wanted and that’s what I found. I had tried things such as fasting ... and then one evening I realised ‘this is real’. It was the 27th night of Ramadan and I didn’t even realise the significance of that night at the time. I tried praying and I felt something very powerful and I took the shahada .”

Gould’s spiritual and creative journey are closely linked. He was leaving high school and enrolling to study design at university around the same time he began researching Islam.

While he asserts that his creative journey has also developed over time, Gould says his passion for design and technology began “as soon as I could use a computer”.

“I recently found my 1993 primary school yearbook and in it I’d written something along the lines of ‘I want to spend my life in design, computers and art,” he says.

“So this was in your primary school yearbook?” I ask to clarify.

Gould continued to pursue his passion for design in high school and university. In the final year exams in high school he came first in the state in the subject ‘Design and Technology’.

“That was a big help because I used the prize money for that for my university degree, which was in design.”

In between maintaining high grades for university Gould worked on his own design projects. In his second year, along with an old high school friend, Gould opened his first company, helping clients create and develop websites.

“I was 19 and I had no idea what I was doing, it was a complete experiment. I didn’t really have any business connections or networks — it was all just trying stuff out and then Allah would open doors,” he says.

You can tell by the way he talks about this first foray into running a company that Gould is both humoured and humbled by it.

“It was basic stuff. I mean I was doing stuff that I probably couldn’t look at today — but I mean, Alhamdulillah. And you just have to get busy doing it.”

However, as a Muslim there were certain business projects his friend — now business partner — wanted to do that conflicted with his faith.

“When I eventually pulled away from that first company part of the reason was — well I had recently become Muslim and some of the projects he wanted to work on were things I couldn’t do. For example, he wanted to do a whole website for ordering wine online ... Eventually we went separate ways.”

Gould made the decision to leave and start his current company, Gould Community, now with offices in Sydney and Dubai.

“At the heart of it we’re a design and branding team but I complement that with my own phonetic activities, creating my own apps, running events, playing around with virtual reality, educating and networking along the way.”

For the past five years Gould and his team have focused particularly on creating events and workshops for creatives and budding entrepreneurs from the Muslim community.

“There are all of these super cool inspiring Muslims and people inspired by their faith doing such amazing stuff. You’ll rarely find them in headlines or have people who know about them.”

Gould also manages a number of apps and websites seeking to increase exposure of creative Muslim projects around the world.

“I think there is an incredible potential in technology bringing out spirituality into the equation. You don’t have to leave your Islam at the door when you put on your virtual reality goggles. You can bring the two together and bring beauty into this age — the digital Age.”

Gould says innovation has been central to reconnecting with Islam over generations.

“I would say Muslims are some of the greatest innovators in history. Artistically in terms of design there has always been a strong creative current that has been inflected by Muslim cultures and art. Things such as calligraphy, mosque architecture and design — those are not just revealed in 7th century Arabia. Each culture added another layer,” he says.

So what ‘layers’ are we seeing added in the 21st Century?

“When someone asks me today what is Islamic art, I say our art has very deep, sacred roots but it could also be that kid on the street in Jakarta with a spray can, it could be a guy in San Francisco making an app showing you how to pray and where to pray. It has to influence and inspire all of these decisions we are making every day, and that’s when you get beautiful things. Your faith can and should have influence in what is being created around the world today.”

For Gould it is integral that Muslims speak “the creative language of the day” in order to communicate a positive message.

“I’m just trying to encourage Muslims to embrace their creativity, not as this new, innovative thing but recognising that that’s what we did as a Muslim global population and tradition and civilisation. Our calligraphers were celebrated and our poets were highly sought after and that was the creative language of the day. Now what we’ve got is social media and new technologies. We have to keep growing our tradition with these new tools.”

Gould is passionate about the importance of investing in aspiration Muslim entrepreneurs.

“The language of today is brands. You know we live in a branded world. We have 6,000 to 8,000 messages a day hitting us and if you can create the brand and the messages that positively influence everyday decisions, that will have a huge cultural influence over the coming years.”

You can tell that it frustrates him that the full creative potential of the Muslim community is not being realised. “You look at all of the new brands that are dominating — where are all of the cool Muslim brands? This is basically the question I have been asking in the last five years.”

Gould’s latest project in the entrepreneurial space is Zileej — a secret project he has been working on over the past two years, which will launch in Dubai but ultimately have an international focus. He will be in Dubai throughout this month working on the numerous projects associated with Zileej. And since it is “secret”, he doesn’t give too much away. I wish I was back in Dubai for this.

“What we’re focusing on is really innovative, really exciting design-led products and experiences for Muslims. It will be a global platform but we are starting in the MENA region — I can’t share a lot but we are creating lots of things — even looking at wearable tech. We have working prototypes of wearable tech that will help with prayer, making dhikr and things like that.”

The café has notably empty by now, signalling that it will close soon.

I have to wrap up my conversation with Gould and I’m definitely disappointed. Beyond answering my questions for this article Gould has given me my own new fantastical aspirations for creative and innovative entrepreneurship in the Muslim community.

On informing him of this he says that it is exactly what he aims to inspire in young creative Muslims through his projects.

“I’m just saying ‘look, I’m just this random dude, I live on the other side of the planet and you definitely don’t associate Australia with Muslim creativity and innovation. Yet I live in Australia and I work in the world — you can do the same wherever you live, so if you live in some rural place in the world you can still create an app, a fashion line, a kids’ brand or an online platform that will inspire Muslims globally.’ That entrepreneurship, that creative impact is a huge tool for positive change.”