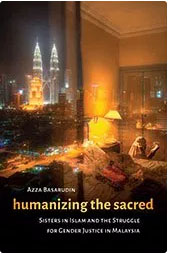 In her new book Humanizing the Sacred: Sisters in Islam and the Struggle for Gender Justice in Malaysia, Azza Basarudin shows how the Malay Sunni women activists of the Sisters of Islam (SIS), a nongovernmental organization promoting justice and equality, are working to reform Islamic law and public policies to address key issues of gender justice in Southeast Asia and beyond.

By weaving together thoughtful interviews and histories of the lives of SIS members, feminist interpretations of Islamic texts, and Malaysian cultural politics, Basarudin ties into global discussions about how women in communities of Muslims are revitalizing Islam by linking interpretation of religious ideas to the protection of rights and freedoms.

We spoke with Basarudin about the book, published this fall in the new Decolonizing Feminisms: Antiracist and Transnational Praxis series.

Q: What was the biggest challenge involved with bringing Humanizing the Sacred to life?

Azza Basarudin: The women activists I researched have dedicated their lives to struggling for self-determination and transforming the ways that Islam is understood and practiced in their community, which is no small feat given the historical marginalization of women from the processes of producing and transmitting Islamic knowledge. The biggest challenge was conveying the passion and dedication of these women through an analytical lens that centralizes gender and power politics and does justice to their activism without subscribing to the politics of Muslim exceptionalism. I wanted the women activists to come alive in the book and to have their words tell the stories of their intimate lives and professional commitments but at the same time be very clear that it is a combination of their class and educational background, Malaysian cultural politics, the historical tradition of Southeast Asian Islam, and Malay culture that has enabled (and constrained) their activism.

Q: What do you think is the book’s most important contribution?

AB: The book’s main contribution is that it highlights how women’s activism destabilizes the historical monopoly of textual interpretation in Malaysia and, consequently, the state’s authority to define and legislate Islam. Islam, in this context, becomes a central site for feminist dissent and political activism. The choice that the women activists made to study Islam rather than to reject it shows the depth of their passion for their religion and the strength of their conviction. More importantly, their refusal to surrender Islam to patriarchal interpretations that have compromised the rights of Muslim women has produced significant implications for themselves, their families and society, as well as the Islamic tradition itself.

Q: Who do you see as the audience?

AB: Specialists and non-specialists alike will find Humanizing the Sacred highly accessible. It can be utilized in undergraduate courses and graduate seminars in Women and Gender Studies, Asian Studies, Anthropology, Religious Studies, Sociology, and Area Studies. It is ideally suited to teach either specifically about Islam and gender, women’s activism, social justice, religion and politics, Muslim societies and cultures, and ethnographic encounters, or more generally about gender and religion, transnational feminisms, anthropology of Southeast Asia, law, and human rights.

Q: What do you hope readers will take away from the book?

AB: I hope readers will be more aware of the diverse interpretations of Islam and the complex realities of Muslim lives. There is no monolithic interpretation of Islam or homogenous Muslim identity. Muslim practices are historically and contextually situated. At the same time, it is important to avoid understanding Islam as an overwhelming and predetermined force in the lives of Muslims. This is because Islam is one of many factors (e.g., gender, sexuality, class, nationality) that intersect to inform people’s existence.

More importantly, I want to normalize the knowledge that women in communities of Muslims are active interpreters of the faith and agents of social transformation. If someone reads this book and rethinks their savior complex, I have done a small part in dismantling stereotypes and caricatures of Islam and Muslims. At this juncture in our history, rife with Islamophobia and xenophobia, there is nothing more dangerous than willful ignorance, misinformation, and stereotypes.

Q: How did you come up with the title?

AB: I wanted a title that conveyed the foundation of women’s activism, that is, how they humanize various aspects of Islamic knowledge that have been taken for granted as divine and therefore considered infallible and outside the scope of human comprehension. “Humanizing the Sacred” seems to capture what the book is about.

Q: What are you reading right now?