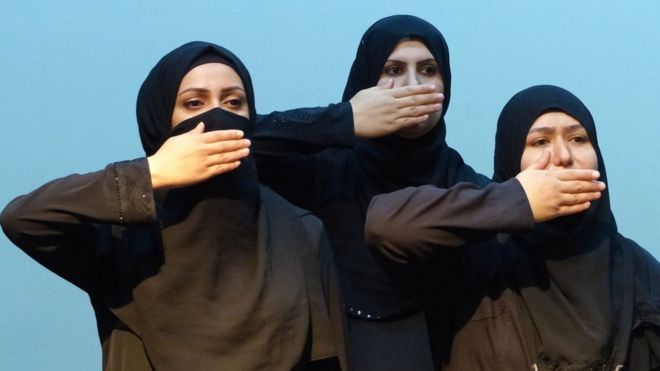 By Tim Masters for the BBC

In 2011, Sham was a pharmacist and mother-of-four with a comfortable life in the Syrian capital, Damascus. As the country descended into civil war, she and her architect husband become one of the millions of displaced people who fled seeking safety.

This week, Sham will tell her story in a modern adaptation of Euripides's anti-war play The Trojan Women, which opens at London's Young Vic before touring the UK.

Queens of Syria features 13 female Syrian refugees who blend their own experiences of the Syrian conflict and their own exile with the ancient Greek text.

As the Young Vic's artistic director, David Lan, says: "We produce a lot of shows in this theatre, and we like to think that they connect in some way to the real world - but it's not that often that the real world actually bursts into the theatre."

First staged in the Jordanian capital, Amman, in 2013, Queens of Syria was also the subject of an award-winning documentary by Yasmin Fedda.

This Arabic-language production (with surtitles) will be the first time British audiences will get to hear first-hand the women's stories of life as a refugee.

Ten of the cast in the UK production were in the original play in Jordan. One of them, Reem, will appear on stage alongside her mother.

"None of us are actors or dreamed of being actors - so it was very strange for us to do it," says Reem, speaking at the Young Vic just a few hours before the first preview.

"Maybe we don't all speak English, but we can be understood through the international language of theatre. People need to understand we are people just like them. We had homes, families, streets, neighbourhoods, college - and we lost it because of the war."

Reem hopes the play will help fight the misconception that people living in the refugee camps "are not educated or workers".

"I was studying engineering in Damascus University. I was forced to leave Syria because of the war," she says. "In Jordan, I had no official papers, no work. It was the same for my father, a lawyer. He lost everything. His office was burned out."

Her brother was 16 when the civil war began - the age of military service.

"My father was really worried that if he went into military service he would be either a killer or a dead man, so we decided to run away to Jordan," she says.

Reem and her family - including eight brothers and sisters - ended up living in a basement flat in a "not particularly nice part of Amman".

She managed to find some low-paid secretarial work, even though it was illegal, and, since the Queens of Syria project, has become its interpreter and administrator.

'Hopes for the future'

After its sold-out run at the Young Vic, Queens of Syria will visit Oxford, Brighton, Liverpool, Leeds, Edinburgh and Durham. The run will end with a West End gala performance at the New London Theatre on 24 July.

The UK version of the play is directed by rising star Zoe Lafferty, whose previous work has focused on conflicts, political power imbalance and human rights violations.

"It's not an easy task to take some of the most difficult life experiences you've had and speak about them on stage," she says.

"At the time of the first production, the women were very fresh out of Syria - the experiences were very new. This is a few years later, and that time allows us to address some of the more happy memories of Syria and explore what it means to be a refugee, as they've had this status for three or four years.

"They've also had the opportunity to speak about their hopes for the future."

Why does Lafferty think Euripides's ancient tragedy still has so much resonance some 2,500 years after it was written?

"It's a female narrative, and we always forget the female narrative when it comes to war," she says. "I think that's the real gift that he gives us with this piece - we have the space to explore what's happening for the woman.