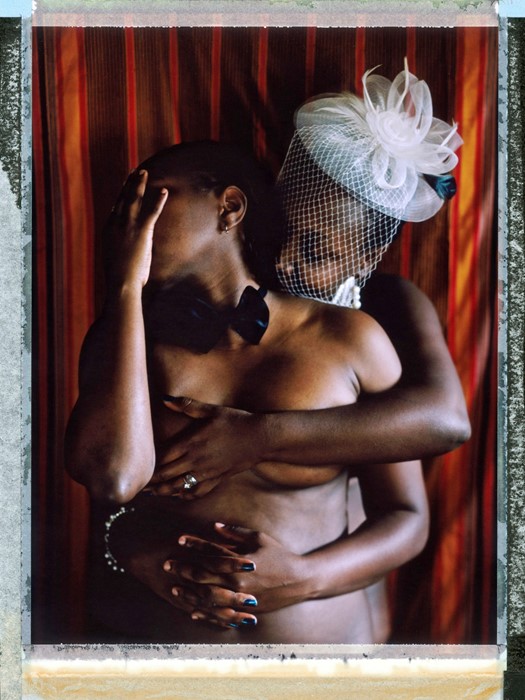 In the western world, the sheer volume of Pride parades can be seen as a symbol for the state of queer rights globally. As voices scream, and sounds echo, an undeniable LGBTI+ presence consumes its surroundings and asserts queer identity over places and faces that have oppressed it. It’s a symbol of a world moving queer rights forward, just as much as it is a reminder of the voices who are missing: forced into silence in fear of persecution, or living in secrecy, as well as those whose voices are used against them through misrepresentation in the media, and homophobia by the law.

Beyond western reality, unfortunately, many queer people cannot live as loudly as they should – so what is life like for those living their identities in silence? This is the question begged by London-based human rights photographer, Robin Hammond, who spent the past four years shooting his intimate, and ongoing series, Where Love is Illegal, of people living their queer identities in secrecy across 16 countries. The series features a set of subject-directed, artistic portraits from countries as far and wide as Russia, Tunisia, Uganda, and Malaysia, that run alongside deeply moving stories of love and bravery.

After spending time as a photojournalist in Africa in 2014, Hammond was beginning to understand that while homophobia had always been prevalent across the continent, it was becoming more potent because of the way in which gay rights were progressing in the west. In reaction to the plight he was witnessing, Hammond turned to his camera to help proliferate the identities of the world’s most degraded queer communities. “Over the last ten years, I noticed this rise of homophobia and transphobia in Africa. Not because Africans had become any more homophobic, but I think there are some conservative elements within the African countries that were feeling threatened by this rise of visibility and the equality of LGBT rights in Europe and America, and they wanted to make sure that it wasn't going to be spread into Africa. So they became very vocal. I've seen a lot of press, a lot of homophobic laws being strengthened, or the LGBT community being attacked.”

Hammond’s photographic process while shooting the series is one that needs to be heavily noted. Rather than coming in as an outsider with a foreign lens, he let his subjects direct their shoots entirely and if at any point subjects wanted to retract, he would simply give them their photo. Its processes like these that are critical for the authentic representation of marginalised people who commonly experience photography as a tool of degradation against them. For example, in Uganda, where conservative media searches Facebook to find photos of queer people, in order to for slander them on the front page of the national press.

But in Where Love is Illegal, photography comes as a point of self-liberation for Hammond’s subjects. For some, the series is a public coming out, and for others the first time they were able to take control of their representation. “More than half the world still lives in countries where same-sex love is illegal”, says Hammond. “These stories are still relevant because they are illustrations of what still goes on every day”

In light of Hammond’s recent show Where Love is Illegal, running at Berlin’s Fhochdrei gallery until 2 September 2018, here are three deeply brave stories of life in the pursuit of queer liberation:

“A posed portrait of 37-year-old, gay man Walid (right) and 26-year-old, gay man Abdesattar (left). They have been together for five years, but because of hostile attitudes towards same-sex relationships in the region and laws that make some consensual same-sex acts a crime, they have kept their relationship hidden. ‘We moved from place to place, lied to families and friends. We had to pretend and to be someone else. We love each other and we will never give up on each other, whatever happens.’

The Tunisian Revolution, also known as the Jasmine Revolution, was an intensive campaign of civil resistance, including a series of street demonstrations taking place in Tunisia, and led to the ousting of longtime president Zine El Abidine Ben Ali in January 2011. It eventually led to a thorough democratization of the country and to free and democratic elections. Tunisian LGBTQI+ community hoped that the revolution would usher in a more open society, and an end to homophobia and transphobia. This has not come to pass. The laws that target LGBTQI+ people remain, most notably article 230 which makes same-sex acts illegal, punishable by up the 3 years in prison. Transgender people are targeted under public decency laws. The general public is no more accepting of LGBTQI+ people than they were before the revolution. Despite the legal and societal discrimination, LGBTQI+ activists are dedicated to campaigning more openly.”

“A posed portrait of 47-year-old trans man Mitch Yusmar, with his partner of 17 years 39-year-old Lalita Abdullah, and their adopted children, nine-year-old Izzy, and three-year-old Daniya at home outside Kuala Lumpur, Malaysia. Mitch is the Senior Manager of Seed, an NGO that caters to the needs of homeless people in Kuala Lumpur. Lalita is the Regional Learning and Development Manager for an oil and gas company. Their relationship is not legally recognized and they live with the insecurity that their family could be torn apart should something happen to Lalita who is the only recognized parent.”