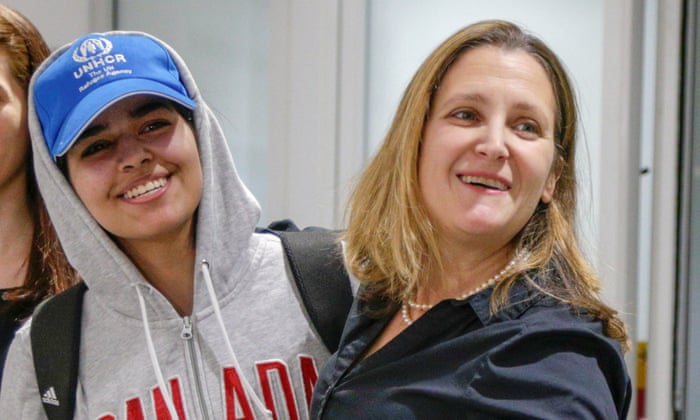 Rahaf Mohammed al-Qunun, the Saudi woman who captured the world’s attention by barricading herself in a Thai hotel room after fleeing abuse in her own country, has said she hopes to inspire other Saudi women to be “brave and free”.

Speaking in her first interview after being given asylum in Canada, and landing in Toronto on Saturday, Qunun, told the ABC Australia her case might be the “agent for change” in Saudi Arabia, a country where women are denied basic freedoms and are not allowed to work, marry and travel without the permission of a male guardian.

“I think that the number of women fleeing from the Saudi administration and abuse will increase, especially since there is no system to stop them,” said Qunun. “I hope my story encourages other women to be brave and free.”

The 18-year-old added: “I hope my story prompts a change to the laws, especially as it’s been exposed to the world.”

Qunun, who was in her first year of university, described how her desire to be independent and to escape abuse inflicted by her father and brother had driven her to make the drastic decision to flee her family during a visit to Kuwait, and head for Australia, with a stopover in Bangkok. She had a visa for Australia but at Bangkok airport she was detained by the Thai immigration authorities, who then placed her in a hotel room ready to be deported back to Saudi Arabia.

After barricading herself in the room and refusing to leave for six nights, Qunun said she had expected the authorities to “enter the room and kidnap me” and had contemplated taking her own life.

“That’s why I wrote a goodbye letter. I decided that I would end my life, before I was forced back to Saudi Arabia,” she said. However, as she used Twitter to publicise her plight, abuse and her decision to renounce Islam, her campaign for asylum quickly gathered momentum and support around the world.

“I wanted to be free from oppression and depression,” she told the ABC. “I wanted to be independent. I wouldn’t have been able to marry the person I wanted. I couldn’t get a job without permission.”

Qunun’s father, who is a governor in Saudi Arabia, and brother had travelled to Bangkok following her escape in an attempt to bring her back with them. After news of her successful asylum in Canada, the family released a statement on Monday saying they had disowned Qunun and described her as “mentally unstable”.