Late 2017. A large paddock, somewhere in England. Rami Malek struts onto the stage. A pit of fake photographers crane their heads up, tracing him across the stage with prop cameras. Malek raises a fist. He pumps it. An invisible crowd of tens of thousands is in the palm of his hand.

It’s the first day of filming for Bohemian Rhapsody, the Queen biopic. You don’t need to squint to feel like it’s Live Aid, the most transcendent gig in Queen’s history. You don’t need to squint to believe that Rami Malek is Freddie Mercury – it’s right there in the impossible jawline, the way he kicks a leg out, how he adjusts his posture with a shimmy. Six months earlier, Malek would have told you that he was scared. Biopics invite a gleefully harsh level of scrutiny. The stakes on a project like this, depicting maybe the greatest performer to have ever lived? Gargantuan. Even a near-miss could derail an actor’s career. (Six months earlier, before accepting this role, Malek was getting well-meaning looks at photo shoots that said, don’t do it.)

If you don’t yet know Rami Malek, start with this: on the very first day of the biggest job of his life, he proceeded straight to the deep end of the pool, and dove in.

If we’re living in the era of loud – the era of hyper-exposure, hyper-sharing and hyper-opinion – then Rami Malek might be the quietest celebrity that could exist in 2018. Not shy, not unopinionated, but quiet. (In an interview published last month, The New York Times bemoaned that he was “extremely reluctant to dish about himself.”) 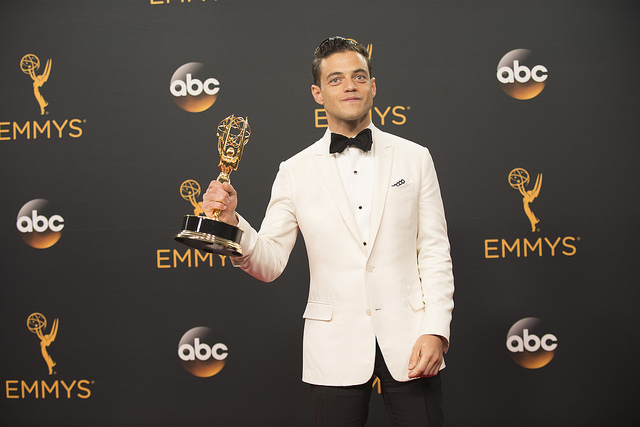 Maybe you chalk that up to patience. This has been a grind. There was the one-off bit role on Gilmore Girls, the prominent arc on 24, a series of appearances in the Night at the Museum films. There was a string of collaborations with towering figures, including Spielberg, Hanks, Thomas Anderson and Seymour Hoffman.

Then, there was the breakthrough, Mr Robot. For all the talent Malek has rubbed shoulders with, there may be no greater influence on him than the director Sam Esmail, a fellow Egyptian-American. Esmail, raised in a Muslim family in New Jersey, has built a body of work inspired in part by the feelings of alienation he felt growing up in America.

It was the pair’s collaboration on Mr Robot – the dystopian TV techno-drama – that brought Malek unanimous acclaim and eventually tipped his career from ‘emerging’ to ‘arriving’.

The show premiered in 2015 as something of a low-key masterpiece, in the way that Mad Men was: tucked away on a niche television network, with a leading talent and director that hadn’t yet exploded into the zeitgeist. Stepping into the role of Elliot, a talented hacker, Malek is paranoid and sensitive, relatable and scary. Above all else, he’s patently watchable.

Funny thing: even after so much waiting, when success comes, it tends to arrive in a hurry.

First, Twitter buzzed. Then, critics gushed. After Robert Downey Jr saw the show, he reached out to Malek over email. (Malek couldn’t believe it was actually him: “I responded, basically, ‘F*** off’.’ And then another email came back.”) Two seasons into Mr. Robot, Malek put on a crisp Dior tuxedo and accepted his Emmy for Outstanding Lead Actor – the first non-white winner of the category in almost 20 years.

Despite a body of accomplishments like his and Bohemian Rhapsody looming like a life-changing juggernaut, Rami Malek remains quiet. This isn’t a loud actor. This isn’t a guy who trawls through Instagram DMs and posts filter-heavy stories that bear the disclaimer of a brand sponsorship. (Rami Malek’s Instagram post count, at time of writing: two. Last time of posting: May 9, 2017.)

“I’m going to take those two pictures down one day,” says Malek, nursing a drink on a lazy Friday in Los Angeles. It’s the day after GQ’s first cover shoot. Malek and I are mourning the fact that the olives on the table have been pitted, and seemingly lost their flavour oomph along the way. “I think it’s the mechanism they use to extract them,” he shrugs. 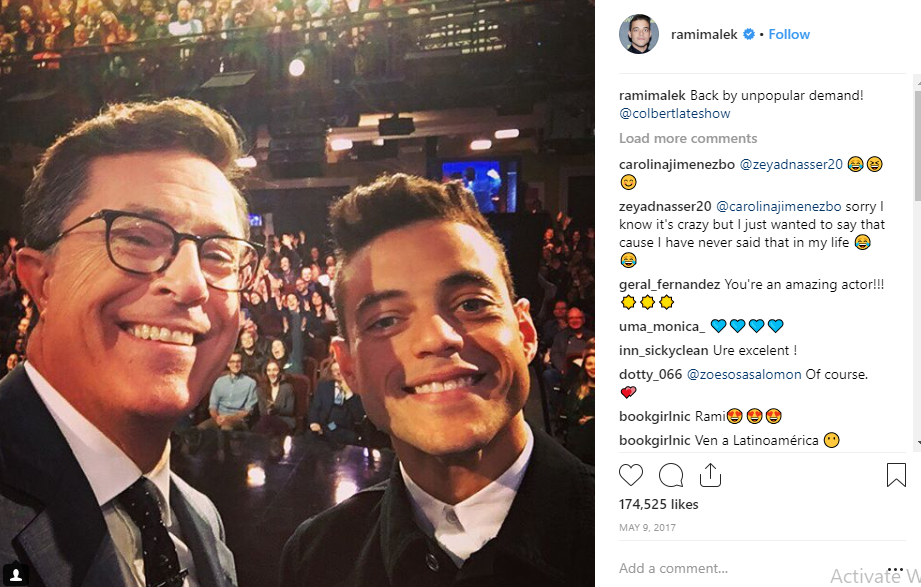 Malek is in a career moment that’s hard to come by. It’s the split-second before a race begins; the last chance to inhale before deep-diving into the ocean. Naturally, external forces are trying their best to pull him in calculated directions – like say, Instagram.

Over the years, everyone from publicists to studio executives has badgered him to shape up, to get more familiar with his selfie camera, to engage with the digital world like a Modern Actor ought to.

“They have hounded me, and I’ve stuck to my guns,” he says, eating another olive. Malek’s energy is simmering and conscientious. He’s a vampiric 37-years-old, with one of those faces that looks young and mature, all at once. When you speak, Malek’s oversized eyes give you full attention. (Often, five or ten minutes will pass before you realise that, such are the powers of his listening and his probing follow-up questions, he’s barely uttered a word.)

After you’ve completed the celebrity interview circuit enough times, patterns emerge. You can tell when someone switches gears into something pre-prepared. You can tell when you’re being acted to. The wonderful thing about Malek? He still has the flashes of authenticity that only come from someone who isn’t rehearsed and honed. A few months ago, speaking on Jimmy Kimmel’s show about Mike Myers’ role in Bohemian Rhapsody, Malek described Myers’ character as a “recutive exec.”

Call it a misspeak, call it punch of nerves – but how many Emmy-winning, Oscar hopeful, leading-men-on-the-verge can still have something as unscripted as nerves? For all the wailing about the modern world’s lack of authenticity, Malek may be the anti-celebrity, the antidote. And that’s because, to date, he’s refused to be anything more or less than Rami Said Malek.

Arabic was the first language out of Malek’s mouth. His parents, Coptic Christians, immigrated from Egypt to America, steeled to build a new life for their family. They were chasing opportunity. But they were wary, too. They knew that with assimilation came risk – the risk of diminishing an identity that had been built up by generations of life in Egypt.

“It was, ‘You are not losing these roots. This is very important for us. You can’t compromise who we are and become Americanised.’ That was a thing that my father was very cognizant of,” he says.