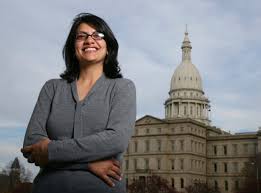 Running in a crowded field of candidates vying to replace John Conyers Jr, who served from 1965 until retirement last year following claims of sexual harassment, Ms Tlaib took 33.6 per cent of the vote following a strong grassroots campaign in which she raised over $1m (£780,000).

There are no Republican candidates contesting the seat, so Ms Tlaib will enter Congress unopposed following a special election on 6 November when she will formally replace Mr Conyers.

Her nearest rival was Detroit Council president Brenda Jones, who despite wider name recognition and several prominent endorsements took 28.5 per cent of the vote.

Ms Tlaib, the daughter of two Palestinian immigrants, was born in Detroit in 1976, where her father had a job at the Ford motor company. She studied politics at Wayne State University, and then law, graduating in 2004.

On Tuesday evening, she said her day had been filled with emotion and described it as “happy chaos” to The Detroit News.

“Especially meeting voters and talking to them, they are inspired,” she told the paper before the polls closed.

“One resident said she’s happy for me and has already written. It’s been amazing to interact with families at polling locations. I feel very much supported.”