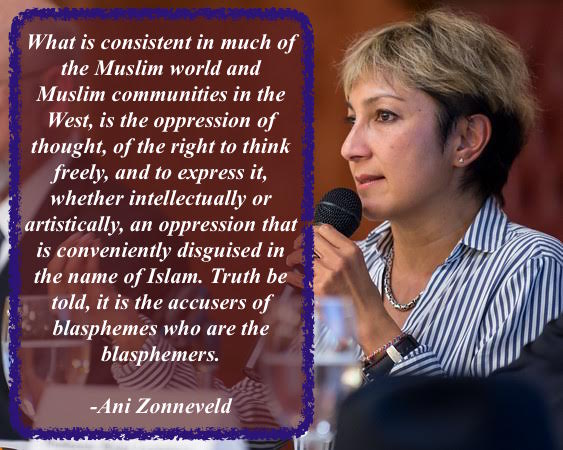 Religious Freedom Day is an important day that signifies the best of America: the doctrine of  separation of religion and State, the right to belief or not, and the right to practice one’s belief without prejudice.

As an American Muslim, the primary reason why I am still a Muslim is the Quranic verse 2:256, which states, “let there be no compulsion in faith.”  It is a powerful verse revealed when the children of one of Prophet Muhammad’s companions chose to convert to Christianity and Judaism. Yes, these Muslims converted out of Islam freely. Juxtapose that to today where individuals who are apostates, or merely ask critical questions of some Islamic doctrine are sentenced to death because of lies perpetuated by our mullahs and “religious authorities.”

With the exception of Tunisia, where freedom of conscience is a right,  the rest of the Muslim-majority countries, dictate the Islamic identity of its citizens for them.  In other words, Muslim countries are actually the antithesis of what they claim to represent, an Islamic State.

In Egypt, an “Islamist” legislature has drafted a law criminalizing atheism. In Malaysia, a government representative of this supposedly moderate Muslim country calls for the hunting of atheists. The Quran in verse 10:99 on the other hand states:  If your Lord wished, everyone on earth would have faith: all of them together. Will you then force people to become believers?”

That is why much of the Muslim world is in the decay that it is. The curtailing of freedoms, religious freedoms in particular, stifles dissenting speech, thought and expression, the backbone to a vibrant, creative and enriching society.

One of the rallying calls of the so-called newly minted progressive-Muslims-since-the-election-of-Trump, such as Linda Sarsour, CAIR, MPAC, ISNA and many others  use Religious Freedom to defend Muslim rights in America. Without a doubt, those perceived as Muslims in America are discriminated against. For these progressive Muslims one should ask: to what extent do you support one’s religious freedoms? Does it include the right for a Muslim to convert out of Islam? Their politically correct answer will probably be  “yes”. But,  what have they done to support ex-Muslims? Nothing. For them, the concept of religious freedom is used only to benefit their definition of Islam, which isn’t  that different from the tyranny found in the “Islamic States.”

At this juncture, America can potentially follow the path of these Muslim countries. The Religious Freedom Act has the potential to undermine the very basis of what is great about America. The façade of one’s religious right to discriminate and to harm one another is evident in the Masterpiece Cakeshop case now at the Supreme Court, and the female genital mutilation and cutting (FGM/C) case to be tried in Detroit in June. And, how often have we heard the use of God and one’s beliefs in elections? Legislatures at the State and Federal level legislating their interpretation of the Bible to undermine women, LGBTQI and minority rights?

In the FGM/C case, two Muslim doctors of the Bohra minority sect are charged by federal prosecutors for illegally performing FGM/C on young girls. Per the advice of Counsel Alan Dershowitz, this case is being framed as the Bohra’s religious sect’s right to perform FGM/C, as enabled by the Religious Freedom Act, regardless that it is an illegal practise.

Dershowitz’ counsel is appalling and misguided as FGM/C actually has no basis in Islam or Christianity for that matter, but is a practice purely for the purpose of controlling women’s sexual desires that predates to the days of Pharoah.

The question to all Americans to consider: Do we really want to go down the path of a theocratic system?

Ani Zonneveld is a Malaysian-American singer, songwriter, activist and writer based in Los Angeles.

She is the president and founder of Muslims for Progressive Values (MPV), a non-profit organization in the United States with affiliates in Canada, Europe, Chile, Australia and Malaysia, creating inclusive communities that welcome and supports interfaith marriages, gay marriages, gender & sexual minorities, as well as sectarian minorities.