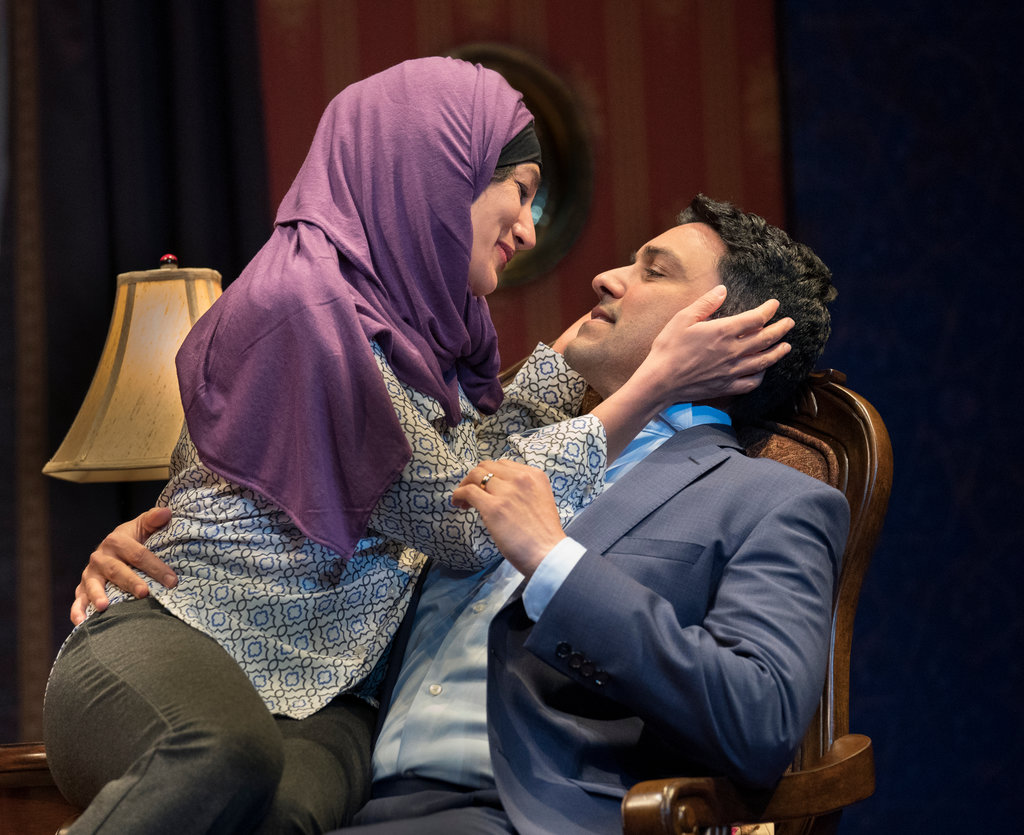 It’s tough to write a coherent play about confusion. How do you dramatize a muddle without making a muddle?

That’s the daunting task the first-time playwright Hammaad Chaudry has set for himself in “An Ordinary Muslim,” which opened on Monday at New York Theater Workshop. A timely look at the traumas of dislocation among the children of Muslim immigrants in England, it seems a bit traumatized and dislocated itself, unable to control the gears of conflict to tell its story clearly.

That story, in outline, is engaging. Azeem Bhatti (Sanjit De Silva) is up for a promotion at a bank in London. Though his parents are from Pakistan, English is his first language; he barely speaks Urdu. He dresses just like his Anglo colleagues, and trash talks with the best of them. If he hoists a glass of orange juice while they down their pints at the pub, and skips the meat at lunch when it isn’t halal, for the most part he passes as a regular lad and is thus unthreatening.

Not that he’s happy about it. “In this country,” he explains bitterly to his wife, Saima, “a good Muslim is an invisible Muslim.”

Yet he is even unhappier that Saima (Purva Bedi) wants to resolve her version of the same conflict more overtly and in public. Up for a promotion herself, she feels confident enough to start wearing the hijab at work, as she has recently started wearing it at home. When she is met with the inevitable blowback from bigots, Azeem tells her it’s her fault for dressing “like an Algerian asylum seeker.”

The conflict between husband and wife, pressurized by their daily encounters with Islamophobia, is set within a larger family and historical context. Azeem and Saima live with Azeem’s parents, Akeel and Malika, who in their own way have played out the drama of deracination.

Akeel (Ranjit Chowdhry) is old enough to have lived through two major emigrations, from India to Pakistan after the 1947 partition and from Pakistan to England in the 1950s. The first move cost his family its land and money, the second its status as part of the majority culture. During the decades of dead-end manual labor in London, Akeel often vented his accumulated frustration on Malika (Rita Wolf) and she in turn vented hers on their daughter, Javeria (Angel Desai).

Set in 2011, “An Ordinary Muslim” considers the double bind facing those who wish to enjoy the opportunities of assimilation while also maintaining a connection to their traditions. Each path looks suspicious to those who favor the other. Azeem lurches back and forth, letting his frustrations at work infect his family life and vice versa. He ends up alienating white colleagues like his pal David (Andrew Hovelson) by telling them that their professed liberality is in fact more treacherous than bigotry.

This is already a great deal for one play to shoulder, and I haven’t even mentioned the thread of the plot that considers the pressures on Azeem that come from within the Muslim community. (No single way of practicing his faith will please everyone.) As those pressures start to drag him down, his behavior becomes even more erratic — “You’ve gone from no Islam to Nation of Islam in five seconds,” Saima says — and the play’s point of view blurs. By the time it tries to connect Azeem’s personal crisis to the rise of Muslim extremist violence in the West, it has lost its ability to sustain an argument.

The high-thread-count plot, the theme of moral confusion and the politico-economic framework that looms over the family drama are all hallmarks of the work of Tony Kushner, who mentored Mr. Chaudry as he worked on “An Ordinary Muslim.” And New York Theater Workshop, which produced Mr. Kushner’s “Homebody/Kabul” in 2001, has put its considerable expertise — and the strong director Jo Bonney — at the production’s disposal. Few first-time playwrights receive such support.

But it wasn’t enough. “An Ordinary Muslim” is an important work still struggling to emerge from a text filled with freshman problems. The argumentative plot (Mr. Chaudry was studying to be a lawyer when the theater bug bit him) makes sense only for short stretches, after each of which the character logic seems to reset. Because the key conflicts are mostly described by unreliable narrators instead of enacted directly for us, they feel imposed or even doubtful. So even though everything about the play’s take on assimilation and racism is convincing in the abstract, nothing about the people experiencing it is.

That isn’t the cast’s fault. No one could steer smoothly through all of Azeem’s hairpin turns, but Mr. De Silva is charismatic while trying. All of the others (including Sathya Sridharan and Harsh Nayyar as representatives of the local Muslim community) have strong moments too, and Ms. Wolf, as a mother who is somehow both amusing and terrifying, has nothing but.