By Steven W Thrasher for The Guardian

When I meet Riz Ahmed in the British Film Institute in London, he’s suffering from the post-Brexit blues. Wearing a scruffy beard, casual green jacket and denim shirt, Ahmed looks very low-key for a rising star of independent and Hollywood cinema. He is warm and talkative, but also deeply agitated about the state of the world. We meet a week after the UK voted to leave the European Union amid anti-immigrant sentiment. Meanwhile, in the US a presidential candidate refuses to back down from his proposal to ban all Muslims from entering the nation.

“Sometimes you just have to wonder, are we back in the 1930s?” he sighs. He bemoans “the disarray of the political establishment and the scapegoating of minorities”. Ahmed is concerned about the rise of hate crimes which appear to be a result of anti-immigrant sentiment stirred up by the Leave campaign. The rapper, film-maker and actor is well known in Britain for pushing the boundaries of comedy, drama, and Muslim and South Asian representations in media. He starred in 2005’s The Road to Guantánamo and in Chris Morris’s 2010 controversial satire Four Lions, about a shambolic terrorist cell in the north of England. But despite other strong performances in Mira Nair’s The Reluctant Fundamentalist and opposite Jake Gyllenhaal in The Nightcrawler, he is not very well known in the US.

That is likely to change. From 10 July, he will star as Nas in HBO’s miniseries The Night Of. It’s a dark and ambitious show reminiscent in tone of HBO’s era-defining drama The Sopranos (the connection doesn’t stop there: James Gandolfini is named as a producer and was originally supposed to star alongside Ahmed before his death). Later this month, he’ll play a CIA analyst in the fifth Jason Bourne movie. Then in December, Ahmed will join the most successful film franchise ever, playing Bodhi Rook in the new Star Wars movie.

Ahmed, who considers himself “culturally” Muslim, is the son of a family who “immigrated twice over” – his grandparents from India to Pakistan, then his parents from Pakistan to England. He describes the community he hails from in London, Wembley, as sharing some traits with Jackson Heights, the New York neighborhood where his character Nas comes from.

“Socioeconomically, they’re different,” he says, adding that his stomping ground was “more hood, basically”. Ahmed says he worked hard to make sure Nas was “grounded in a specificity” of working-class Queens, spending months hanging out there, taking trips to Rikers Island jail and slipping unnoticed into classes at Queens College. He also formed the rap group Swet Shop Boys during this time with former Das Racist member Heems.

That homework pays off in The Night Of – an adaptation of the BBC’s Criminal Justice – and the first episode, The Beach, is a taut thriller that feels like a film directed by Hitchcock, albeit cast and remixed by Spike Lee.

Ahmed hopes the show will “make people look into the criminal justice system more deeply and question their own prejudices”. It may just do so. With a South Asian lead character, white and black witnesses who are hard to characterize, and white and black police officers of indeterminate trustworthiness, The Night Of breaks the police procedural mold and makes relying upon stereotypes almost impossible.

Visually, there is a great deal of darkness in the show, which leaves the viewer wondering what is happening. “It’s got that Caravaggio thing where it’s all about the darkness,” says Ahmed, adding that it’s about “what you read into the areas that aren’t illuminated”. During the production he was content letting his background research “sit there and not trying to communicate that too much”, and simply allowing the audience to wonder what was going on inside Nas. 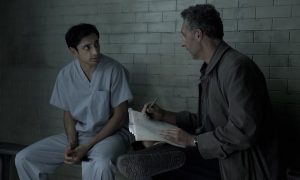 Riz Ahmed and John Turturro in The Night Of. Photograph: HBO

But Ahmed is usually all about saying quite explicitly what’s on his mind. His rap music is consistently provocative, from his album Post 9/11 Blues to the Englistan mixtape a decade later, which features a video called I ain’t being racist, but.... In it, Ahmed appears in front of a flag complaining that “this fucking country is going down the shitter” because “immigrants got jobs and impregnate our sisters”. It is not hard to imagine this character voting Leave in Brexit. He also directed his first short film, Daytimer, in 2014, which is the semi-autobiographical story of 13-year-old Naseem, who ditches school to attend a daytime rave. It was shot in the neighborhood, house and bedroom Ahmed grew up in. He’s a world away from Wembley now though and will soon appear in this year’s most eagerly awaited blockbuster,Rogue One: A Star Wars Story.

As with many of the cast, he’s not too keen to talk about his Rogue One role of Rebel Alliance soldier Bodhi Rook. He opens up a bit more when I ask him what it means to see someone who looks like him step into Star Wars. Having wrestled with diversity long before it became a bandwagon buzzword, he’s excited that “Lucasfilm have decided to normalize the diversity of the universe”.

So does race exist in the Star Wars universe? “There’s a projection of race and its manifestations,” he says, “that is quite instructive. It’s not just descriptive, is it? Stories do set templates for our culture. They’re our guidebooks.”

I ask him about what it meant when John Boyega got blowback for being a black stormtrooper. How will it feel for him when he perhaps becomes known as the first Muslim Star Wars actor?

“I don’t know, man,” he says. “It’s strange. I can understand when John Boyega bristled at that kind of description, because it’s putting you back in a pigeonhole.”

It’s a conundrum, this wanting to engage with race while not being confined by racism. On the one hand, “so much of what you try to do in life, not just as a minority but as a creative person, is to transcend the labels people impose on you,” he says. “On the other, if someone who looks like me or can relate to my life experience is inspired more specifically by the idea that I’m playing that role, then that’s something to celebrate.”

We circle back to being called “political”, a label I think is often given to artists of color but he thinks has more to do with class, “because you’re American and I’m British”, he laughs. Ahmed mentions a Junot Díaz quote about how vampires not being able to see their reflection helps them know they are monsters. For Ahmed, the idea of not being able to “see myself reflected back in the culture” made him, like Díaz, wonder if he was a monster.

He pauses before adding: “I’m going to build a couple of mirrors.”