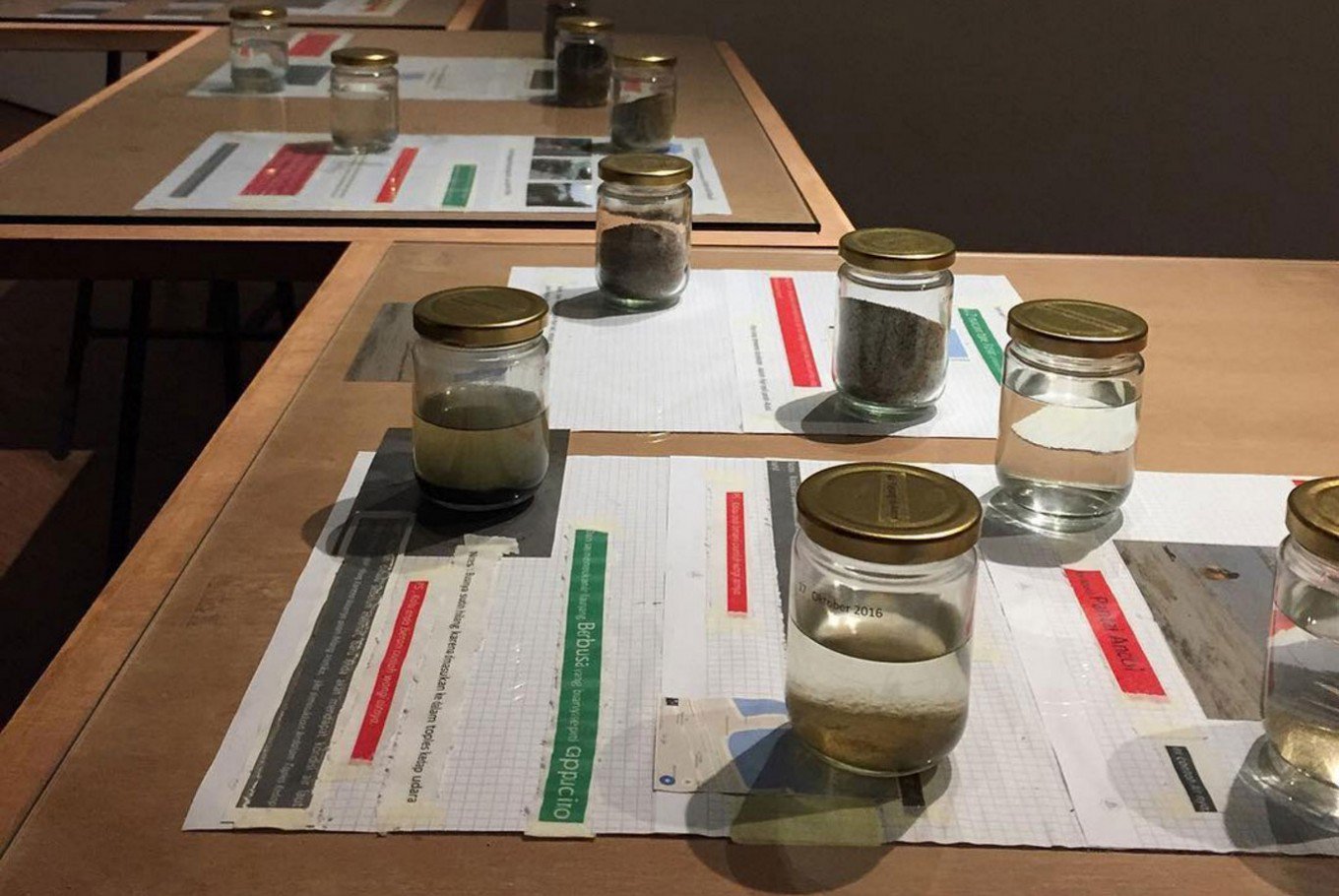 The sound of green clam shells cracking underfoot resonating through the sea air give passersby a good idea of the grinding poverty of the fishermen who bring in mollusks as part of their daily catch from Jakarta Bay. A dimly lit wooden cabin, much like those where fishermen go to husk the shells, stood in the middle of the reeking mass, just as they would in the fishing villages in Cilincing, Muara Angke and other parts of North Jakarta.

However, this scene is part of Mengupas Kerang di Jakarta (husking clams in Jakarta), an installation art piece by rookie artist Rianti Gautama, which examines the relationship between fishermen and the sea, particularly in the waters of Jakarta Bay.

"They continue to fish for clams and other seafood in spite of the bay’s pollution just like their ancestors, because they do not know any better,” said the Parahyangan Catholic University Architecture major, who researched the work and gathered the material for it in the Muara Angke area. “I was struck by the poverty and unsanitary living conditions of the fishermen, which shows the government’s failure to support them.  This is ironic, in light of Indonesia’s heritage as a maritime nation”.

"Mengupas Kerang di Jakarta" is one of the artworks featuring in the annual Exi(s)t exhibition shown at the Dia.lo.gue art gallery in Kemang, South Jakarta. In line with its theme, “Bodies of Land Surrounded by Water”, this year’s exhibition takes on a maritime twist.

“It takes on the symbiotic relationship between humanity and the sea. In our case, the dynamics of that relationship is reflected in the current state of Jakarta Bay and the Jakarta seawall,” said curator Mitha Budiyanto of the exhibition, which features the works of upcoming artists Ahmad Fauzan, Dio Prakasa, Fiametta Gabriella, Gabriel Sena, Gadis Fitriana and the aforementioned Rianti Gautama. “The artworks are also a critique of rampant development, which is often incompatible with Indonesia’s maritime heritage."

Fiametta Gabriella is all too aware of this situation, as reflected by her work, Sick Mother, which is a poignant reflection of humanity’s checkered relationship with the sea.

"Sick Mother is a metaphor , from whom we depend on our sustenance. I can relate to this aspect since I became a mother myself,” said the Nanyang Academy of Fine Arts alumnus of the installation piece, which is made of stockings and clam shells, among other things. “However, overfishing and environmental damage increasingly barren.”

The clam shells weighing down the stockings poignantly recreated the impression of an exhausted Mother Earth that can barely sustain life, and is obviously at the end of her tether.

Gadis Fitriana’s Pedoman Anthropocene Bab III: Menuju Satu Dekade Pemutihan Karang  uses lighting and video mapping on a chunk of coral to show its bleaching process. The state of the art approach, and the age-old perspectives underlying it, marks a departure from her studies at the Jakarta Institute of Art as a Fine Arts Studio Painting major.

“I see the relation between the ocean and land from the cosmological perspective, where land becomes a form dominated by humans that day by day becomes destructive towards the environment, while the ocean is something bigger than humanity,” said Gadis, who counts eminent Indonesian sculptor Dolorosa Sinaga among her mentors. “The idea of kenduri  attracted me because of its mourning phase. Mourning requires emotions of empathy, sorrow and longing, while kenduri is serene, making for a communal experience.”

A group meditating before the changing shades of coral reflect this premise, as they seem to ponder on the coral’s changes much as one mulls over life’s phases or our changing world.

Slated until Dec. 11, “Exi(s)t #5: The Bodies of Land Surrounded By Water” is the fifth exhibition of its kind held in Dia.lo.gue. Organized by the gallery and veteran artist F.X. Harsono since 2011, the exhibition has consistently been highlighting the works of up and coming artists in Jakarta.