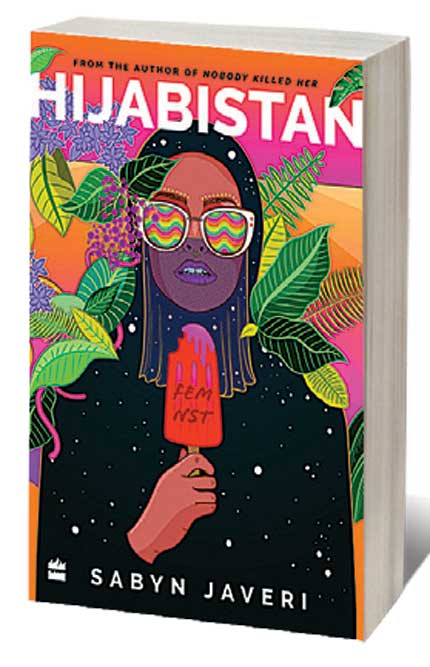 WHEN SABYN JAVERI recently launched her book Hijabistan (Harper; 224 pages; Rs399) at the Karachi Literature Festival, a few of the attendees were disappointed. They felt that they had gotten a raw deal, having bought the book assuming it was stories about women who wear the hijab. Instead, only a few of the characters in the short stories actually wore one. The rest are metaphorical, figurative interpretations of the hijab.

In ‘The Adulteress’ the protagonist— inspired by Emma Bovary and Anna Karenina, and longing to escape the mundanities of her housewife duties— turns to writing. While cooking in her small kitchen, she thinks back to a brief, passionate encounter she shared with a fellow writer, and realises that the real betrayal has been to herself. ‘A World Without Men’ explores the relationship between a literature teacher and a Muslim student, a Pakistani immigrant in Leicester who’s struggling to come to terms with her sexuality. In ‘The Urge’, a young kleptomaniac uses her abaya to steal lipsticks and flash men.

Set between Karachi and the United Kingdom, the stories in Hijabistan are wonderfully diverse—exploring themes like extremism, identity, assimilation and marriage.

Over a phone call from Karachi, Javeri says that she’s always been interested in delving behind the obvious, the stories we don’t want to tell. She enjoys reading writers like Ismat Chughtai, particularly her short story ‘Lihaaf’, and her writings on female sexuality.

“When I chose the title ‘Hijabistan’, I wanted to write about a land where our desires, our sexuality, the things we really strive for are weird—what is it that we’re trying to veil? The stories that define us are the ones that are hidden deep inside us and that’s what I wanted to bring out. I’m sorry people were disappointed that I didn’t just reproduce stories of women who wear the hijab and what a struggle it is or isn’t,” she says, laughing.

Despite being influenced by Chughtai and other Pakistani writers like Khalida Hussain and Kishwar Naheed, Javeri did not discover their works (in translation) until she went to Oxford University for a Masters in creative writing. Javeri grew up in ’80s Pakistan, where under Zia-ul-Haq’s dictatorship places like Karachi were stripped of public libraries. Many of the presses and publishing houses had been forced to shut down because of political motivations, which led to a scarcity in literature.

“Being a post-colonial society, there was also a huge stress to communicate in English. I went to an English-medium school where the curriculum was UK-based, so we were reading about authors who were having tea parties on their lawns and wishing for the rain to go away. We were in a dictatorial setup struggling for basic things, not to mention the power breakdowns, so I felt completely alienated from this Victorian literature that was being stuffed down our throats,” she says.

While in London, Javeri happened to meet Rakshanda Jalil, who was doing her PhD on Progressive Writers, and that strengthened her interest in writers of the subcontinent even more. Writers like Chughtai and Naheed were writing about issues that were relevant to her. “Being an average Pakistani, their work really struck a chord and that’s the voice I try to bring into my writing.”

Javeri says that she consciously tries to find a confluence between the personal and political in her stories— it’s why she chose Karachi, the city she grew up in, as one of the settings. “It’s the heart of this country and an industrial and economic hub, which is crazy because there’s zero infrastructure and planning. There are huge flyovers that are not functional, and tall buildings with no water. There’s ambitious planning without any foundation. In a way, it’s a metaphor for the wider idea of the country.”

A recurring motif in the immigrant stories in Hijabistan is the struggle between assimilation and staying true to one’s roots. ‘Only in London’ and ‘The Good Wife’ are written from a diaspora point of view. In the former, the protagonist is trying to shun her Muslim identity by dressing the way she wants to, while in the latter, the woman tries to assert her identity by wearing the hijab. Javeri moved to London after marriage and spent over a decade there, returning to Karachi four years ago.

“When I chose the title ‘Hijabistan’, I wanted to write about a land where our desires, our sexuality, the things we really strive for are weird—what is it that we’re trying to veil”

The idea of a Muslim woman in the West had been with her for a long time. Growing up in a climate where her cultural identity was suppressed by her religious one, she discovered that not much had changed even after she left Pakistan. While pursuing her research at Oxford, there were expectations to write about something she could identify with. “It was very difficult for people to see me without my Muslim identity or my Pakistani heritage. Even though it was positive discrimination—it was a welcome thing to see Muslims who were not extreme in their views or who weren’t asserting their religious identity through their clothing—it still made me conscious. It was like a metaphorical hijab around me, that I couldn’t get away from,” she says.

Javeri was keen to explore how identities take over people’s selves, so much so that individuality is forgotten. In ‘The Hijab and Her’, Nasira, a Pakistani exchange student in an American college, is singled out by her professor while discussing post-colonialism. Silently battling the humiliation, she opens up her laptop and looks up ISIS. In another story, a young British Muslim girl finds herself in Syria questioning ideas of jihad. The inspiration for this character was one of Javeri’s own students, whose father idealised Saudi Arabia. She thought an Islamic State in the middle of Iraq or Syria was going to be a perfect world.

“I work with a lot of young people and there is a renewed interest in this idea of an Islamic state. People are hankering for this so-called glorious past, where bloodshed and violence were justified in the name of this ideal state. I wanted to know what appealed to the youth. I think it was this sense of isolation because they were not accepted for who they were and were being slotted by their religious identity, the way they dressed.”

While the author clarifies that she does not believe in cause and effect when it comes to violence, her experiences in the West made her realise how people like her were often held responsible for the entire Muslim or Asian community merely by their dress or the colour of their skin. “If a woman is wearing a headscarf, even if out of choice, she almost becomes a spokesperson for Islam. I wanted to look at how these experiences can sometimes drive people to the edge, where they actually want to explore this ideal of the perfect Islamic state run by a caliph and a Khalifa.”

The hijab continues to be hugely politicised, and champions of women’s rights consider it a tool for oppression. Javeri, however, believes that it has moved away from the concept of purdah and piety. “While women do find comfort in faith and religion— many aren’t allowed to have a career or move around freely—the hijab is also about social mobility. In places like Pakistan, you can go from point A to point B with less harassment. It’s a way to access public spaces in a largely male domain,” she says.

HIJABISTAN IS JAVERI’S second book. Her much acclaimed Nobody Killed Her (2017) was a fictional tale centred around a female prime minister’s assassination, drawing out the power struggles of two ambitious women in Pakistan’s political corridors. Readers and critics alike were quick to draw parallels with the life (and death) of Benazir Bhutto and her trusty aide Naheed Khan, even as Javeri maintained that she was inspired by a group of women leaders like Margaret Thatcher, Indira Gandhi and Aung San Suu Kyi. Javeri says that she was always fascinated, and inspired, by female leadership in politics—she did a significant amount of research on this topic during her PhD—and was curious about the challenges they faced to get to these positions. “I’ve always been bothered by the fact that despite comprising 50 per cent of the population, women only have 1 per cent representation, whether it’s politically, on boards or other areas. In the [‘Hijabistan’] story, I also wanted to show how when a female leader is shot, it’s a nuisance that everything has come to a standstill. If it was a male leader, everybody would be mourning. Women are treated so differently.”