Women are fed up with being treated like children 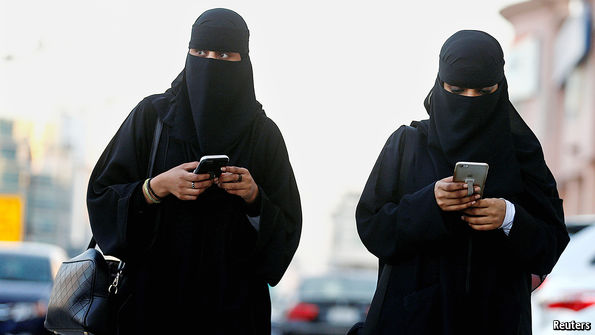 CAN Saudi Arabia keep its women? Last month’s appointment of women to head two big banks and Tadawul, the kingdom’s stock exchange, offers hope that the path to a fulfilling career is not completely blocked. But the restrictions of Saudi life remain so irksome that covertly, silently, many women are finding ways out.

On family trips abroad, some jump ship. Some, having been sent to Western universities at the government’s expense, postpone their return indefinitely. Others avail themselves of clandestine online services offering marriages of convenience to men willing to whisk them abroad. Iman, an administrator at a private hospital in Riyadh, has found a package deal for $4,000 offering an Australian honeymoon during which she plans to scarper.

Propelling the flight is the kingdom’s wilaya, or guardianship, law. Although it has received less publicity than the world’s only sex-specific driving ban, it imposes harsher curbs on female mobility. To travel, work or study abroad, receive hospital treatment or an ID card, or even leave prison once a sentence is served, women need the consent of a male wali, or guardian. From birth to death, they are handed from one wali to the next—father, husband and, if both of those die, the nearest male relative. Sometimes that might be a teenage son or brother, because although boys are treated as adults from puberty, women are treated as minors all their lives.

Iman, a divorcee, is subject to the guardianship of her brother, who at 17 is barely half her age. He lets her work as a manager at a hospital, but pockets her earnings. She says she is kept like a chattel, while he spends her money on drugs and weekends in massage parlours in neighbouring Bahrain. Her ex-husband refuses to let her see their children. Her brother prevents her from completing her studies in Europe. If she protests, he threatens to beat her.

She tried going to court to have the guardianship transferred to a more sympathetic elder brother, but the judge dismissed the case, she says, while talking on his phone. Though she dressed demurely in a full veil, she suspects the judge objected to her presenting her own case. Social services offer poor refuge, since hostels for abused women resemble prisons where the windows are barred and visitors banned. When she hears other women say that their brothers don’t beat them, Iman assumes they are lying “because they are scared of social housing”.

Estimates of the number of “runaway girls”, to use the Saudi term, are imprecise, but, says Mansour al-Askar, a sociologist at Imam Muhammad ibn Saud University in Riyadh, the rate is rising. By his estimates, over a thousand flee the kingdom every year, while more escape Riyadh for Jeddah, the kingdom’s more liberal coastal metropolis.

Dissenting Saudi scholars insist that the guardianship laws stem not from Islam, but the Bedouin customs that still hold sway in much of Arabia’s hinterland. Khadija, the Prophet Muhammad’s first wife, was a merchant who sponsored her husband. His subsequent wives moved between Medina and Mecca without him. “Islam freed women from the wilaya,” says Hassan al-Maliki, a theologian in Riyadh who has sometimes been jailed for free-thinking. “A woman can choose whom she marries.” But the clerics who man the judiciary maintain that guardians protect the vulnerable and keep families and, by extension, society together. Last December the courts sentenced a man caught denouncing the wilaya on social media to a year in jail. Another Saudi study, at a university in Mecca, acknowledged that some runaways might be fleeing physical abuse, but said that most had been influenced by the “misuse of social media, copying other cultures and weak beliefs”.

Economists note that the guardianship system makes Saudi Arabia poorer. More than a quarter of the 150,000 students the kingdom sends abroad every year are women. Given that many defer their return or choose to remain in more liberal places like Dubai, much of the $5bn the government spends on their studies each year is going to waste. “Saudi Arabia is losing the battle to keep its talent,” says Najah al-Osaimi, a female Saudi academic who has settled in Britain.

Awkwardly for reformers, some of the most tenacious advocates of the wilaya are women, particularly in obscurantist southern provinces like Asir. Despite such beguiling hashtags as #StopEnslavingSaudiWomen and #IAmMyOwnGuardian, a social-media campaign to end the wilaya system attracted just 14,000 signatures.

Use them or lose them Saudi Arabia’s leaders acknowledge the need to make the kingdom more women-friendly. Already, more women attend Saudi universities than men. And although some men still send their own photographs when they apply for jobs for their wives (and even attend their interviews), in 2012 the kingdom waived the need for women to have their guardians’ approval for four types of work, including clothes-shop assistants, chefs and amusement-park attendants.

In upmarket malls, women can be seen selling aftershave, boldly spraying samples onto male hands. Broadminded men can give their female wards five-year permits to move unaccompanied (though they get updates by text message whenever their charges travel abroad). Countrywide, the dress code has relaxed a bit. In big cities, women have added streaks of colour and patterns to the black abayas or cloaks that the state requires them to wear. Even in Burayda, the bastion of Saudi Arabia’s puritanical rite, women have cut slits for their eyes in veils that hitherto fully covered their faces, and let their abayas slip from their heads to their shoulders.

Nonetheless many women seethe with frustration. On social media, footage of women riding motorbikes has gone viral. So too has a female silhouette, whisky bottle in hand, dancing on her car roof. A female pop group, clad in black, sings songs of protest from dodgems, toy cars, skateboards, roller-skates and other wheeled vehicles that they can legally drive. Unless the system adapts, warns Mr al-Askar, the sociologist, it risks crumbling. Judges and the police should work together to strip oppressive men of their right to be walis, he says. But for Iman, the hospital manager, reform can’t come soon enough. An Australian honeymoon awaits.