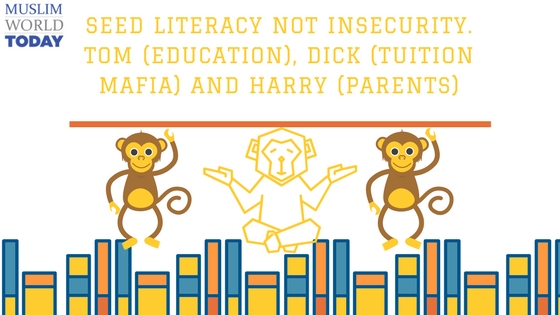 It is unfortunate that society ignores the age when a child’s personality and brain develops the most. Instead, the majority of parents leave their children at the mercy of technology or, in countries like Pakistan, at the mercy of underage or untrained maids.

Can technology equipped with audio and video replace books and parents?

It is very unfortunate to see that parents have already given up their responsibility by paying hefty fees for schools and home tutors. The former kills the meaning of education and the latter the concept of schools.

Our children enter school with the knowledge of incidental learning of 3,000 words and are given uncomprehended knowledge to memorise at home for getting a promotion to the next grade. Parents further hand them over to the tutors to fulfill school requirements . Being unaware of what they both are turning their kids into, parents have made their children a pawn in their lives. The bigger game of saving face in society is played by parents by using the result (report) cards of their children as the certificate of accomplished parents.

Pakistani parents are not paying for the education and personality development of their children. Instead, they  pay money to make sure their children get good marks, the topper in the class the better. So they can either inflate their magnificent child grooming or snub down someone else. In their struggle for marks, they create a sort of negative competition among the children for marks, instead of instilling the spirit of cooperation among them.

Recently the results of secondary school certificate of multiple boards were declared. I have not gotten a chance to come across a single parent whose child has scored less than 90 per cent of the total. The most interesting part is parents saying that their child is very up set for not scoring 100  or even 101 marks of 100.

When you come across the same talent in person and ask about their hobbies, they don’t have any. They eat, sleep and study exams. Their tuition starts at 5am. From the tuition centre, they directly go to schools which starts at 8am and then in afternoons they take another round of tuition. What they are studying in all this time is simple: rote learning the books and doing the questions of past years. And they appear in exam as machines who can produce the photocopies of what they have fed with for more than 12 hours a day.

Sad part is if you throw a twisted question to them, they are blank. After getting an education in English medium for 10 years they cannot speak and write ex tempore. And the large number of toppers fail professional institute entry exams.

Our society instead of considering their faults come out on roads to demand the dismissal of such exams which toppers of boards at times can’t pass. Why don’t parents and teachers face the reality that marks of toppers are actually an inflation. It neither flourishes the skills of brainstorming and critical thinking nor reflects the intellect level of the student. It is high time the concept of tuition academy be killed and schools once again revive their actual role of educating students with the art of rhetoric,  brainstorming and critical thinking. Before we get lost in the history of dumps.