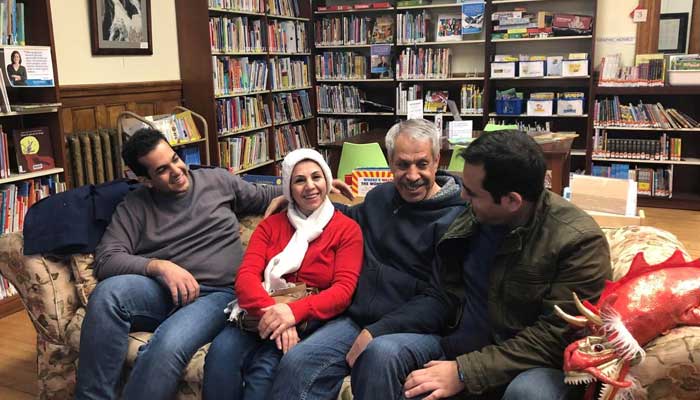 During the six-hour drive from New York City to a tiny town in northern Vermont, Iranian student Shirin Estahbanati cried at the thought of seeing her father for the first time in nearly three years. Since then, he had suffered a heart attack, and she hadn’t dared leave America to comfort him.

But as she traveled north, she also couldn’t stop worrying. What if she missed the turnoff and drove across the US-Canadian border by mistake?

Estahbanati, like many Iranian students in the United States, has a single-entry visa and can’t leave the country without risking that she won’t be allowed back in. And her parents, as Iranian citizens, are blocked by US President Donald Trump’s travel ban from visiting her in the United States.

She didn’t want to miss her destination: the Haskell Free Library and Opera House.

Estahbanati and her family had agreed to meet around 9 am at the library, which through a historic anomaly straddles the US-Canada border – and today has been thrust into an unlikely role as the site of emotional reunions between people separated by the administration’s immigration policies.

The 31-year-old parked her car and, excitement battling with anxiety, walked to the entrance of the Victorian building. But two hours later, her parents and sister still had not appeared from the Canadian side, and her calls to her sister’s cell phone went unanswered.

Finally, she saw them. Because of construction near the library, their GPS device had sent them to the line for the U.S. port of entry. Her parents had no US visas, and they had been detained by American border agents. After approximately two hours, they were released and allowed to join Estahbanati at the library.

When they hugged each other, it felt as if her father had shrunk. He took a deep breath as he held his daughter tight. “I missed your smell,” he told her.

Remembering the moment, her smile turned down with the effort not to cry. “The time I was just hugging my parents,” she said, “I was thinking, I wish I could stop all clocks all over the world.”

This year, as migrant families from Latin America were separated at the U.S. southern border, a more nuanced reality has been playing out on the northern frontier with Canada. Here, dozens of Iranian families have reunited at the Haskell library. Drawn by word-of-mouth and a smattering of social media posts, they have come to the geopolitical gray zone at the rural frontier library, located at once in Derby Line, Vermont, and Stanstead, Quebec.

The Iranian families have undertaken fraught, costly journeys for the chance of a few hours together on the library’s grounds. Although several Iranians said they hadn’t faced any obstacles from immigration authorities, others said U.S. border officers have at times detained them for several hours, tried to bar them from entering the library, told them they shouldn’t be visiting each other there or said they should limit their visits to just a few minutes. American and Canadian officials have threatened to shut the library over the visits, one library staff member said.

“This is a neutral area, but the U.S. government doesn’t accept this situation, and they put a lot of pressure on us,” said Sina Dadsetan, an Iranian living in Canada who traveled to the library to see his sister the same day Estahbanati saw her family.

The Trump administration says its travel ban is necessary to protect the United States, arguing that the countries in question – Iran, Libya, North Korea, Somalia, Syria, Yemen and, to a lesser extent, Venezuela – don’t share enough information that would confirm their citizens are not a threat, or are the source of terrorism threats.

Officials with U.S. Customs and Border Protection, which oversees the Border Patrol, declined a request for an interview about the library. A spokesman, Michael McCarthy, declined to comment on the families’ accounts of their interactions with U.S. border officials or on the library staff member’s allegation that U.S. and Canadian authorities have threatened to close it.

“U.S. Border Patrol works closely with our Canadian counterparts, as well as the local community, to prevent illegal cross border activity,” McCarthy said in a statement.

Erique Gasse, a spokesman for the Royal Canadian Mounted Police, Canada’s federal law enforcement agency, denied that the agency had threatened to shut the library down. “This is not the way we talk,” he said. “We don’t do that.”