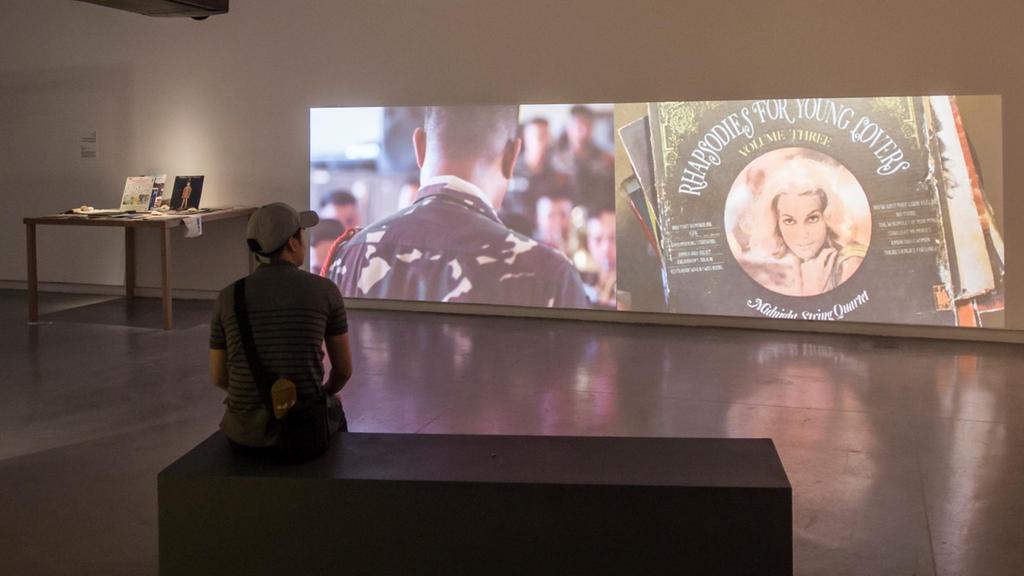 In 1967, the government of the Philippines entered into a peace agreement with the secessionist southern region of Mindanao, setting up an autonomous Muslim state and laying out the semi-successful grounds for peace that last to this day. The treaty’s significance was also international: brokered by Muammar Qaddafi, it was one of the first to emerge from the new networks among Asian and Arab countries that were then being forged.

Sharjah Art Foundation’s latest show takes this moment of interlocking South East Asian-Middle Eastern history as its jumping off point. A Tripoli Agreement inaugurates a new partnership between the foundation and the Sharjah-based airline Air Arabia that consists of a curatorial residency and exhibition roughly pitched along the lines of travel and networks. Here the curator, Renan Laru-an, who lives in Manila but is originally from Mindanao, surveys the connections between South East Asia and the Middle East in the context of the Cold War.

“I am taking Mindanao as a site for artistic thoughts that are not covered in the main discourse within South East Asia or the art history of the Philippines,” Laru-an explains. “I want to return to these rich discourses that were initiated – because they’re there already.”

The show bears the traces of its status as a long-term research project. It foregrounds archival research and has a fair number of interactive projects, and the result is a rich, rambunctious cacophony. Musical scores by the late Filipino ethnomusicologist Jose Maceda, presented by the curator Dayang Yraola, document the soundscape of Mindanao and its unique percussion instruments. An installation by the Malaysia Design Archive explores the continually changing relationship between humans and dogs – seen in Islam as ritually impure animals – throughout Malaysian history. The Indian artist Prajakta Potnis explores the famous kitchen debate between then-vice-president Richard Nixon and Soviet premier Nikita Khrushchev, held in a mock-up of an American kitchen of the future in 1959. The installation re-creates the chilling feel of that time, where even domestic space was not safe from geopolitical threat. A cauliflower in the oven seems, memorably, almost deformed by nuclear radiation.

Though the exhibition’s historical emphasis is clear, the criteria for which moments are relevant were not always sharp. There were a few good but curatorially perplexing examples thrown in, such as the work of the Iranian-German artist Sina Seifee and his exploration of poetic avatars. But the show makes some strong contributions to the study of South-to-South connections – a frequent subject in the art world today – and introduces it well to those who might not know it. The granddaddy of South-to-South collaboration, the Bandung Conference, for example, is represented here in the research project called http//:frombendungtoberlin.com, a digital platform that imagines a different future for the post-Cold War world, where the countries of the Global South triumphed over the US. The Bandung Conference brought newly independent Asian and African states to Indonesia in 1955 to discuss strategies and collaboration after colonialism, and paved the way for the Non-Aligned Movement.

Intersections between South-to-South histories and the global powers appear in individual, personal examples, like that of the Lebanese physician Najeeb M Saleeby, later drafted by the US military, to research Moro society in Mindanao. Others tell the story of unsavoury episodes of imperialism, some of which are shocking to learn. The Manila artist Mark Salvatus shows an archive presentation and video installation about the Philippines Constabulary Band, who performed at ceremonial occasions and who were founded by an African-American army captain in the early 20th century. In Salvatus’s video, the band play the William Tell Overture, the marching song that was played at the 1904 World’s Fair in St Louis, when Filipinos were literally put on display as an exhibition for American visitors.